We love the big way. What? A versatile, powerful, comfortable bike. They are ready for any adventure and, on top of that, attract attention wherever they go. If this is the traditional recipe for creating a great bike of its kind, Suzuki seems to have done its homework.

We had the opportunity to drive several hundred kilometers and V-Strom 1050, the new generation of the Japanese flagship that arrived in Brazil a few months ago. Below you will find out what it is running with, its performance, use and behavior, but here is a spoiler: it lives up to that time. way.

The V-Strom 1050 is a worthy successor to Suzuki’s adventurous legacy. In the test, it stood out for its performance, economy and versatility.

Before the test, thanks to Sun Motors Suzuki, from Porto Alegre, who immediately provided us with a unit of the new V-Strom for testing. It is also important to present the context in which 1050 emerged. 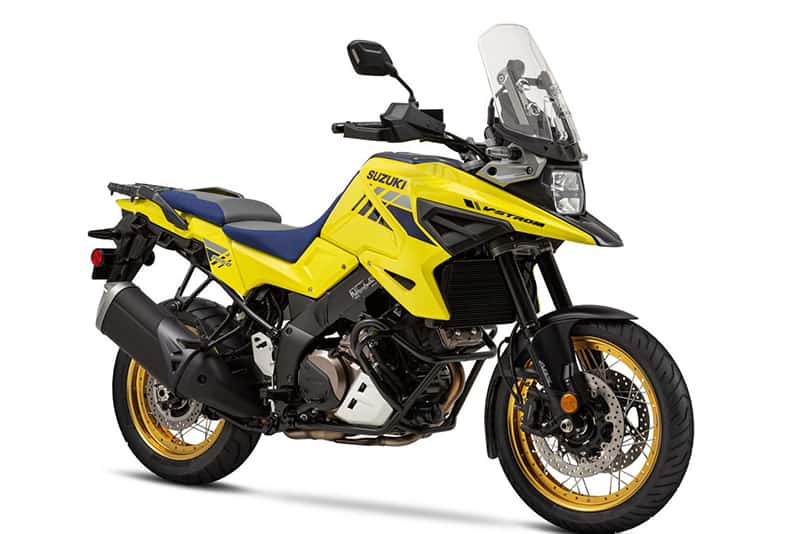 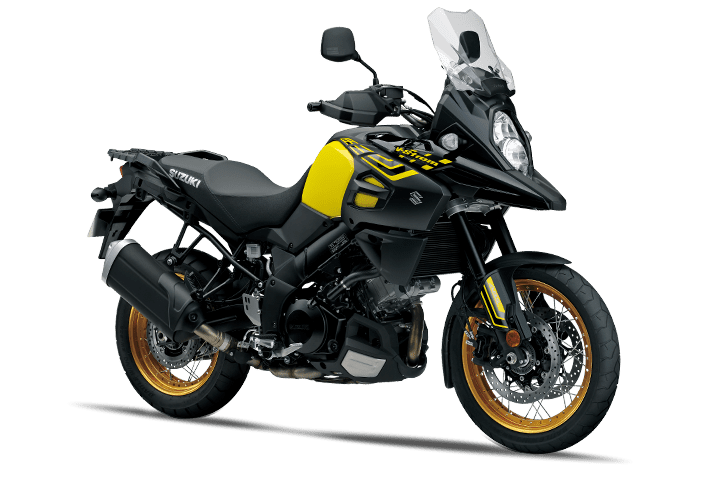 It is not a motorcycle made from scratch. Its creation came from the V-Strom 1000, known to travelers since 2003. From the DL 1000 it inherited important features such as the engine, wheels and chassis, but everything was improved accordingly. It is light, thin, more economical, powerful and, above all, has excellent materials. In practice it ends up being another bike.

This is because the model had a leap compared to its successorespecially on the part of technology. There are power maps, adjustable ABS, cruise control, full LED lighting, USB and 12V sockets, power and slipper clutch. In addition, to see it’s brand new. With references to the original Suzuki DRz and DR Big of the 1980s, he makes it clear that the bike is more ‘secondary and less touring’ than before. 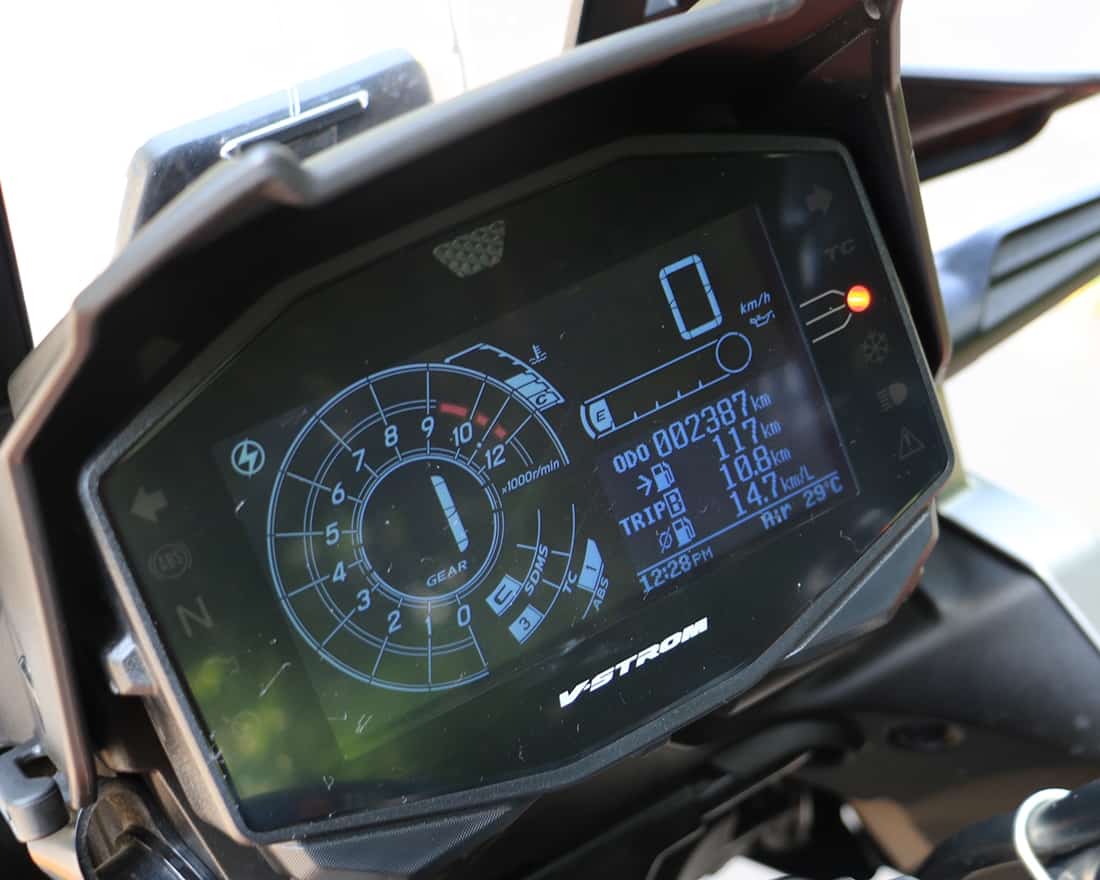 The V-Strom has made big strides in technology over its predecessor, but it’s still a step behind other competitors. Still, the features work and are easy to operate.

You know you are facing the truth the announcer before he even calls V-Strom 1050. Tuned wheels, long-travel suspension, compact rear, slim silhouette and a look reminiscent of vintage mixed-use motorcycles. 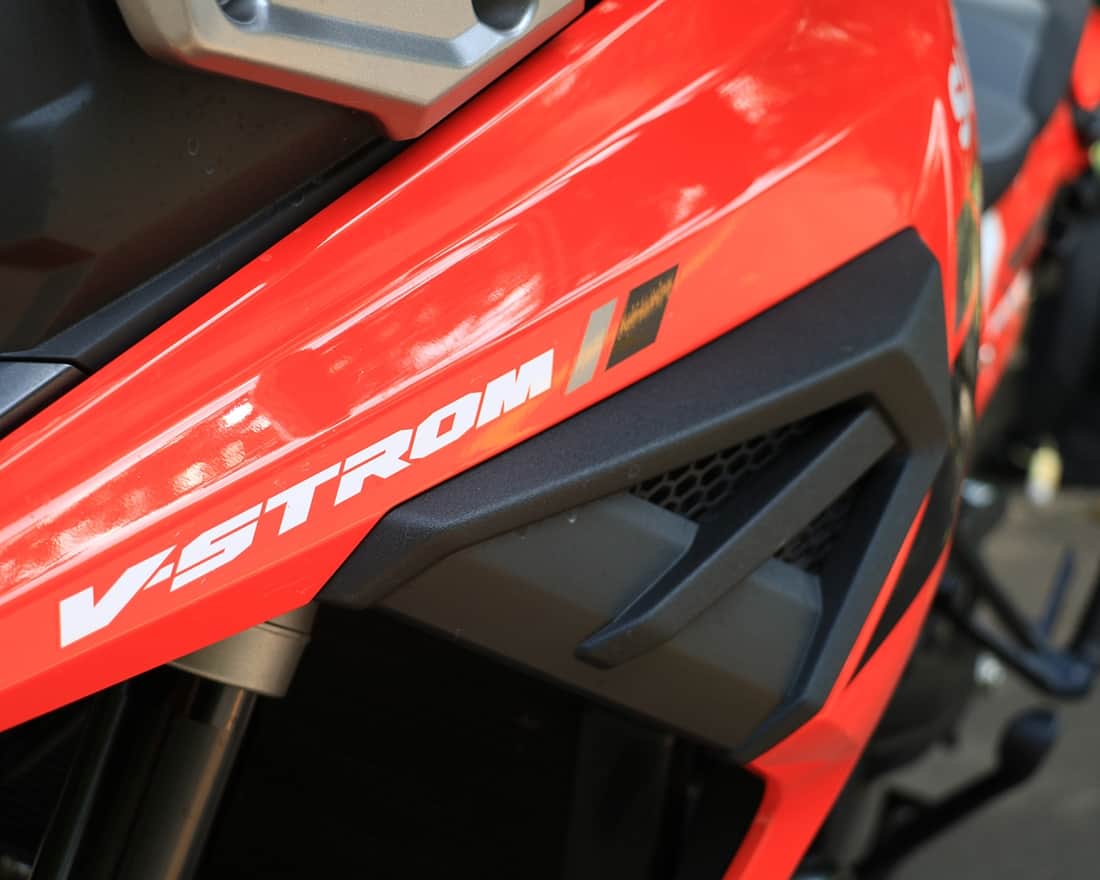 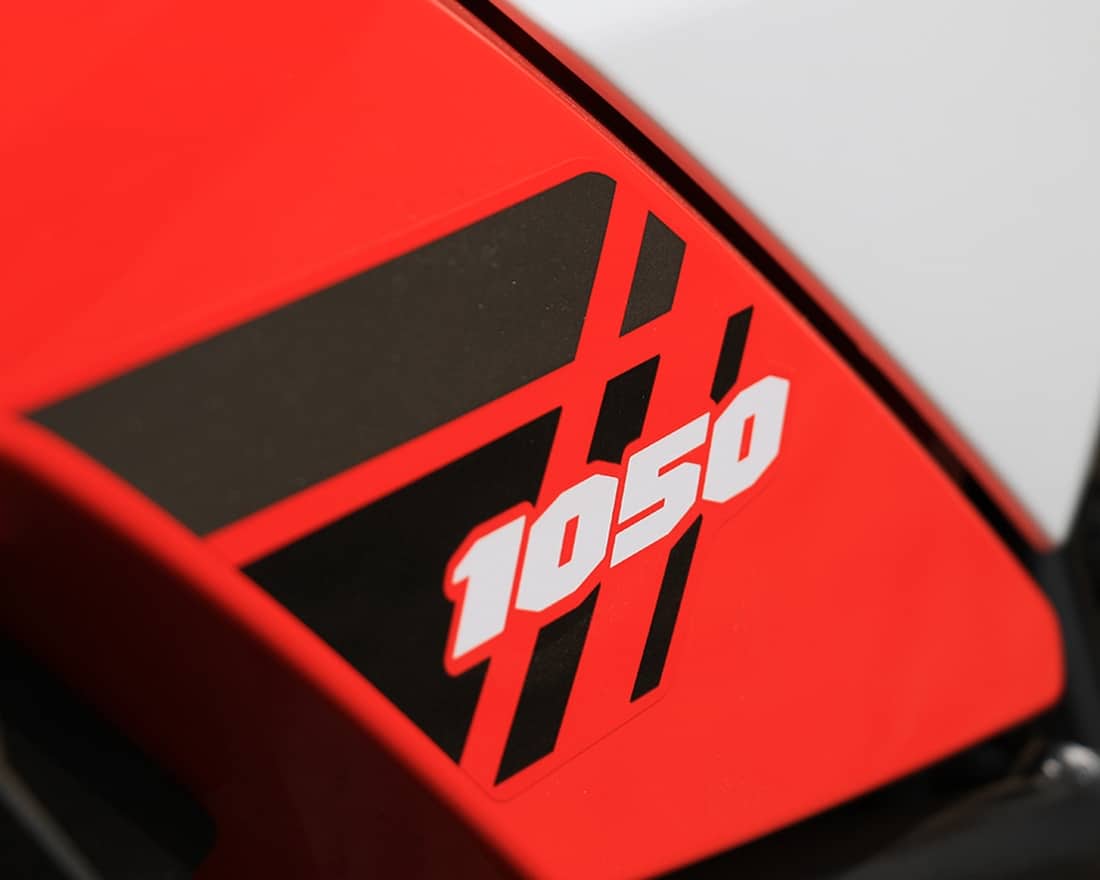 And just a few kilometers, regardless of the terrain, are enough to confirm all the performances. After all, despite its large size, Suzuki is light and agilewithout requiring any effort for a sudden change of trajectory.

Its weight of 247 kg is only on paper and the feeling you get from the handles is you are riding a smaller motorcycle. Therefore, he faces the mistakes of dirt roads and avoids obstacles skillfully and naturally, in the same way he drives between cars – also doing well in urban traffic. On land, it has the same safety as a 300 cc model with more than 100 kg.

In addition to the chassis, another feature of the model is performance of your engine. The V-Strom 1050 delivers 107 horsepower and 10.5 kgf.m of torque maximum, thanks to a set of two cylinders in V, DOHC, liquid cooling and 1,037 cm³. Therefore, the engine retains the design of the predecessor, but it is refined – with 6 hp more powerful. 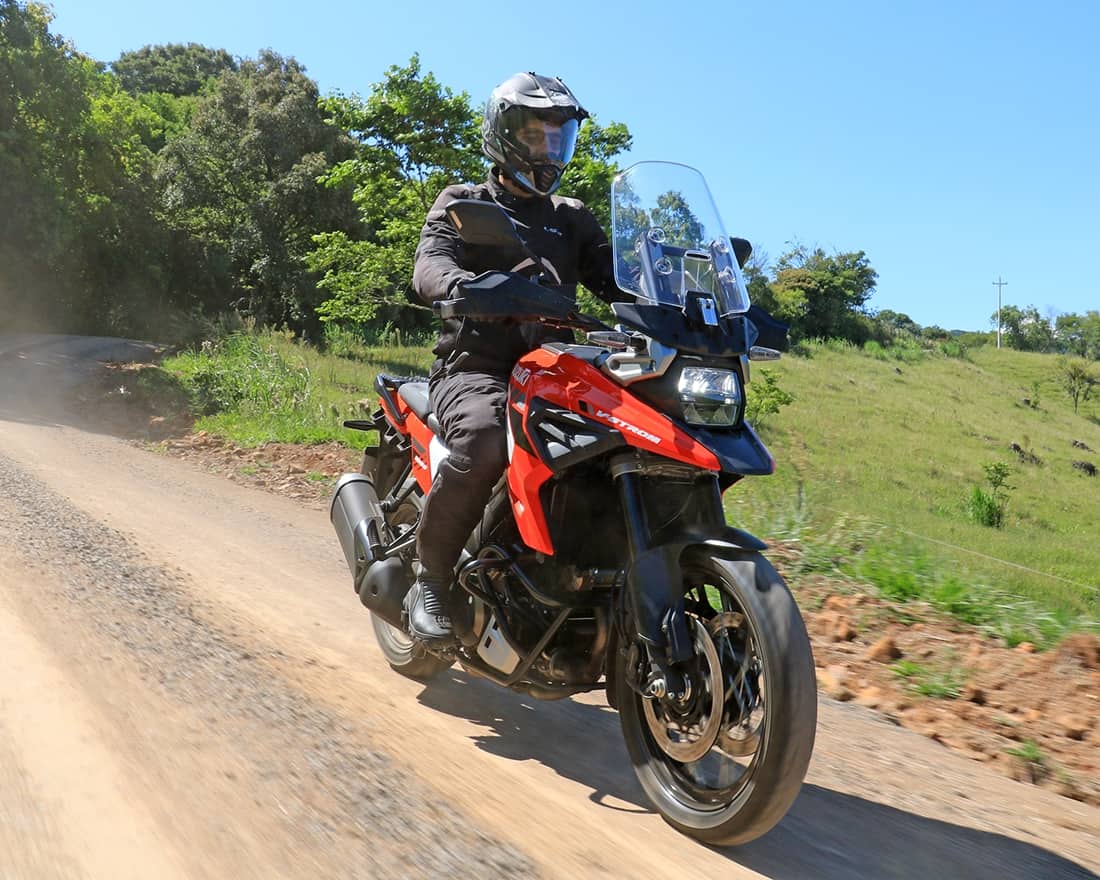 The new V-Strom walks the earth like few others. Riding the bike is reassuring, with the electronics ‘controlling’ the engine and traction at just the right levels

The engine stands out in three respects. The first is ability, a trademark of V-Strom. It is strong and has a low growl. In the high power map, it makes it clear that you are on a 1000cc motorcycle and reach 120 km / h in the blink of an eye.

The second point is softness. The propeller is very light, with almost imperceptible levels of vibration and no harsh (or metallic) sound when accelerating, regardless of rpm. 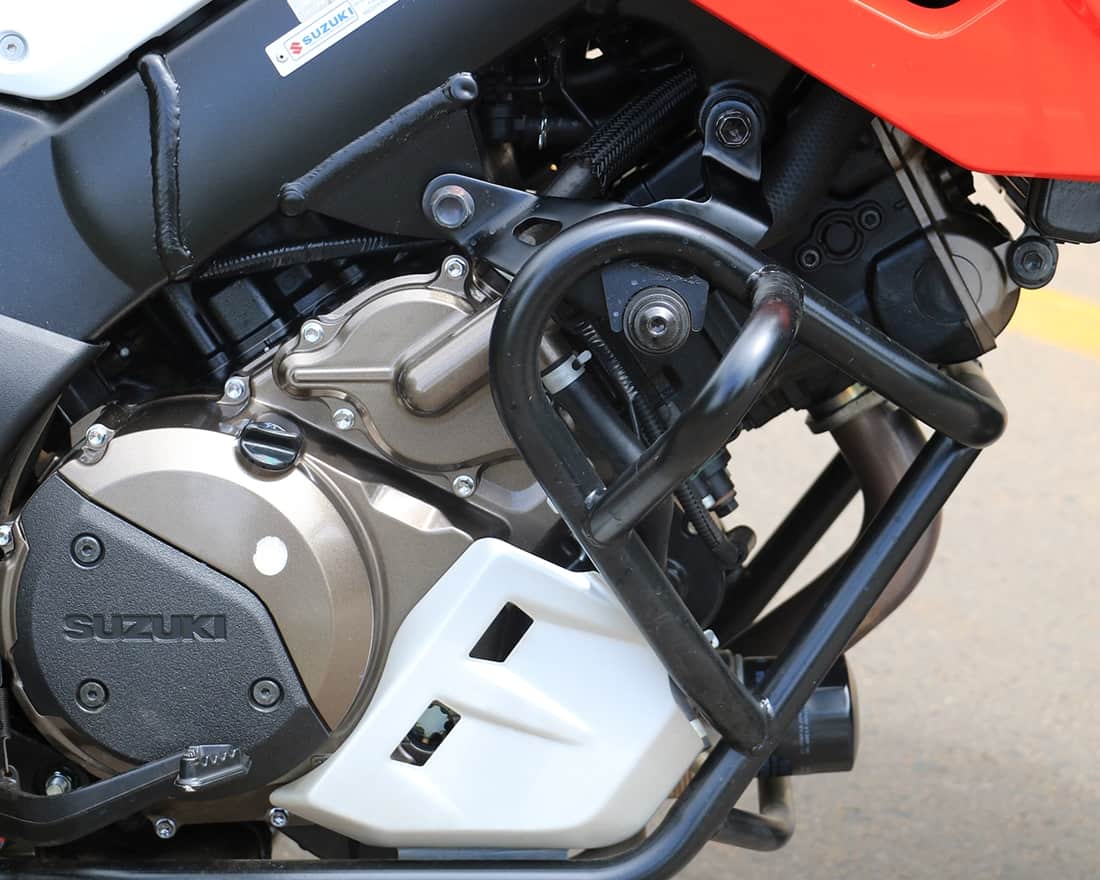 The engine is one of the most important aspects of the model. Powerful, smooth and economical, it did more than 20 kilometers per liter in various conditions

Finally, economy. We did several tests, simulating the different types of use that the model is recommended for, and the results were good in all of them. If the overall average was more than 20 kilometers per liter, then it reached more than 23 km per liter on the roadin ‘strong uncle’, almost always within speed limits.

It’s time to get the V-Strom on the road to see how it fares trip. Therefore, between the actions of the test we did back and forth to Method 13one of the postcards of gaucho motorcycles – and one of the greatest works of road engineering in Brazil. 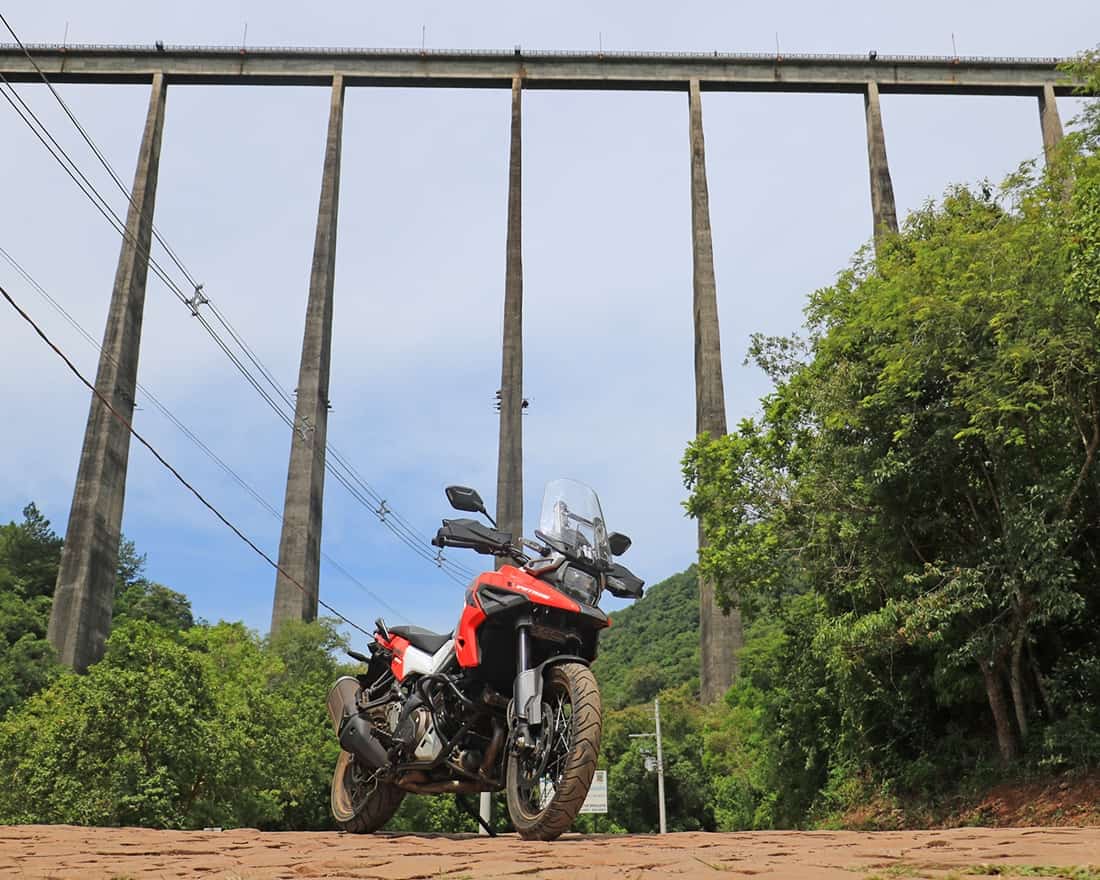 Suzuki V-Strom 1050 in front of Viaduct 13, the second longest railway in the world.

There were about 450 kilometers covered on a hot day, with 90% of the route on tarmac and the rest on dirt roads. Travel, highway, dust, everything the highway likes. 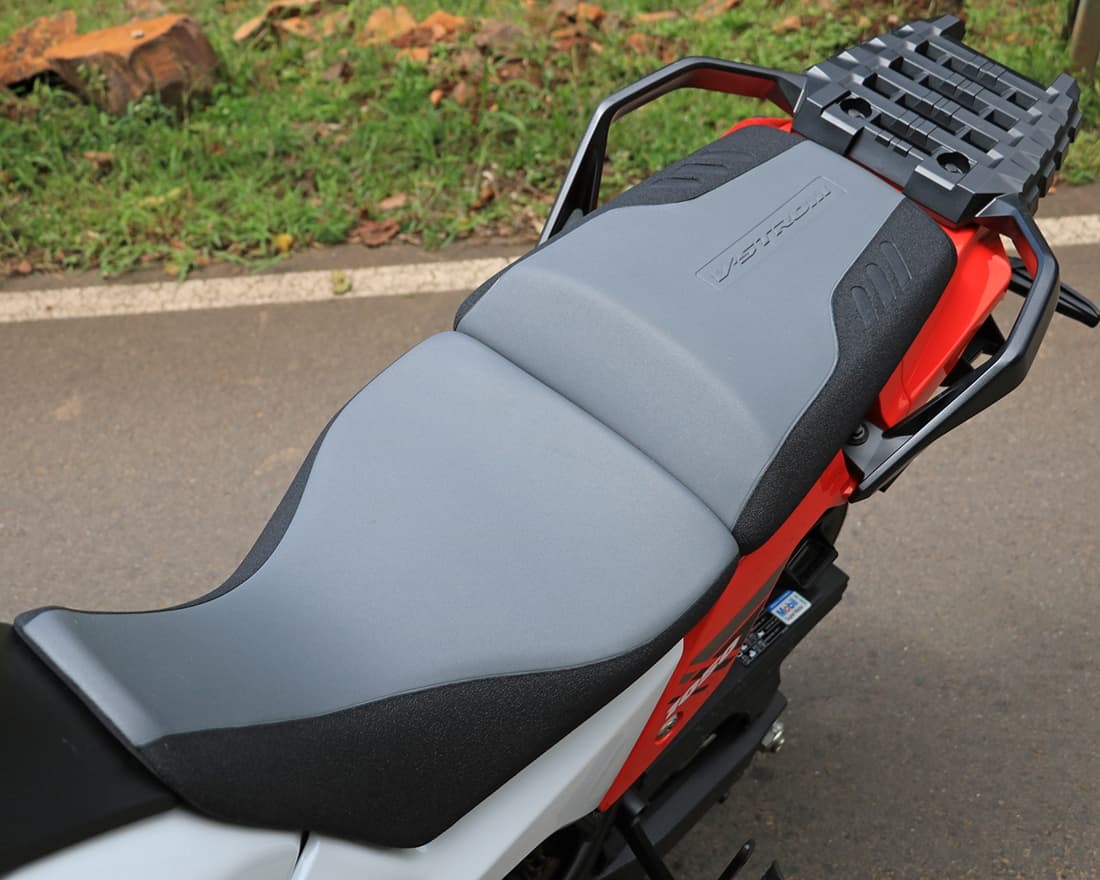 A two-part bench can be more generous in density and width to please those who want to spend several hours of the day on it. Unfortunately, there is no sale of the best seat as an option.

It didn’t take long the mechanical set shows its virtues. Powerful and skittish engine at high power, quiet and still powerful at low. Sufficient torque to start again from 60 km / h even in the sixth gear without any choking. Precise shifting supported by a smooth clutch assist. Beautiful.

But there is a catch. THE V-Strom is ‘more adventure’ than its previous generation and is therefore thinner. If you get too many points for speed, you end up losing some of the fun. THE aerodynamic protection it allows you to get wind on the sides of the pilot’s chest, while Bank It doesn’t match the old sofa in the main aisle. Bipartite and almost flat, it started to bother after 1h30 on the road and caused discomfort at the end of the day. It would be nice to have a comfort version as an option for those that put a premium on comfort in appearance, but there isn’t. #StayTipSuzuki.

An electronic package denotes a a real jumper from the old V-Strom 1000, but still not at the level of other direct competitors. After all, there is a real battle between the developers, which prepare their big ways and the most modern resources to please people who need a thirst for isolation. 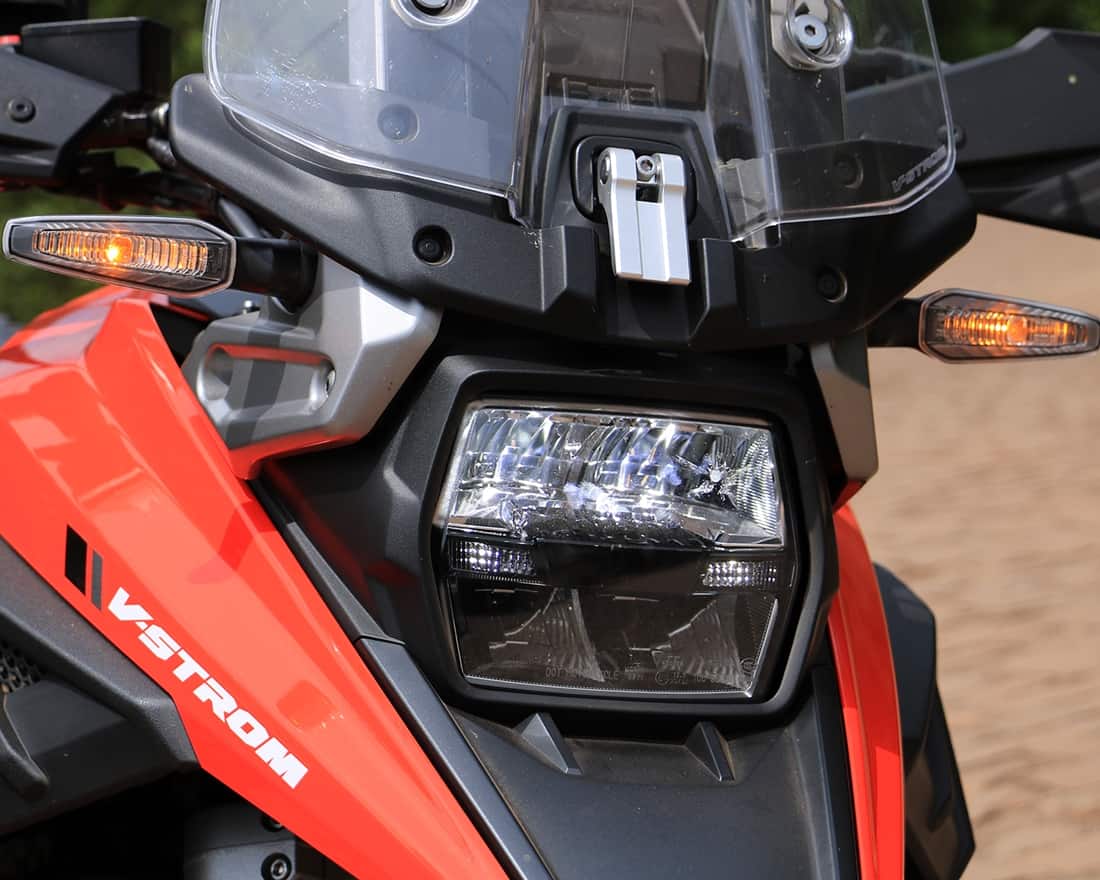 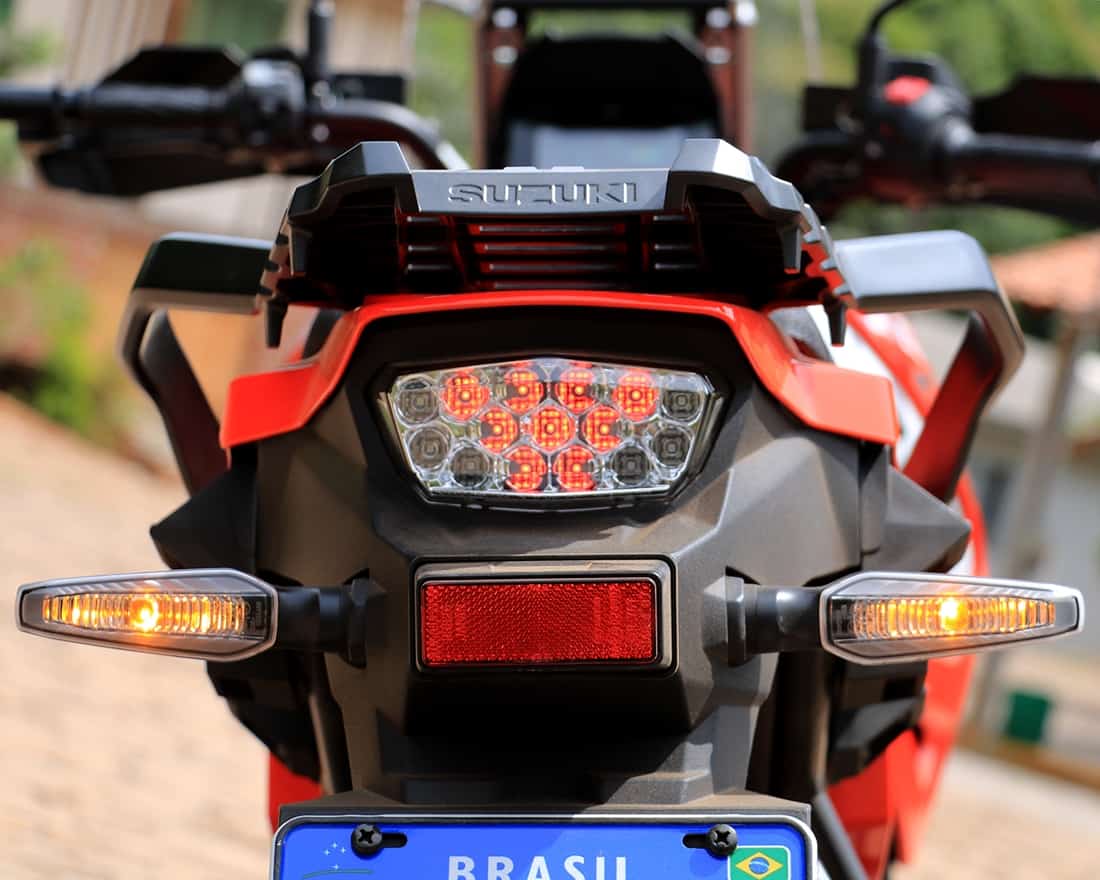 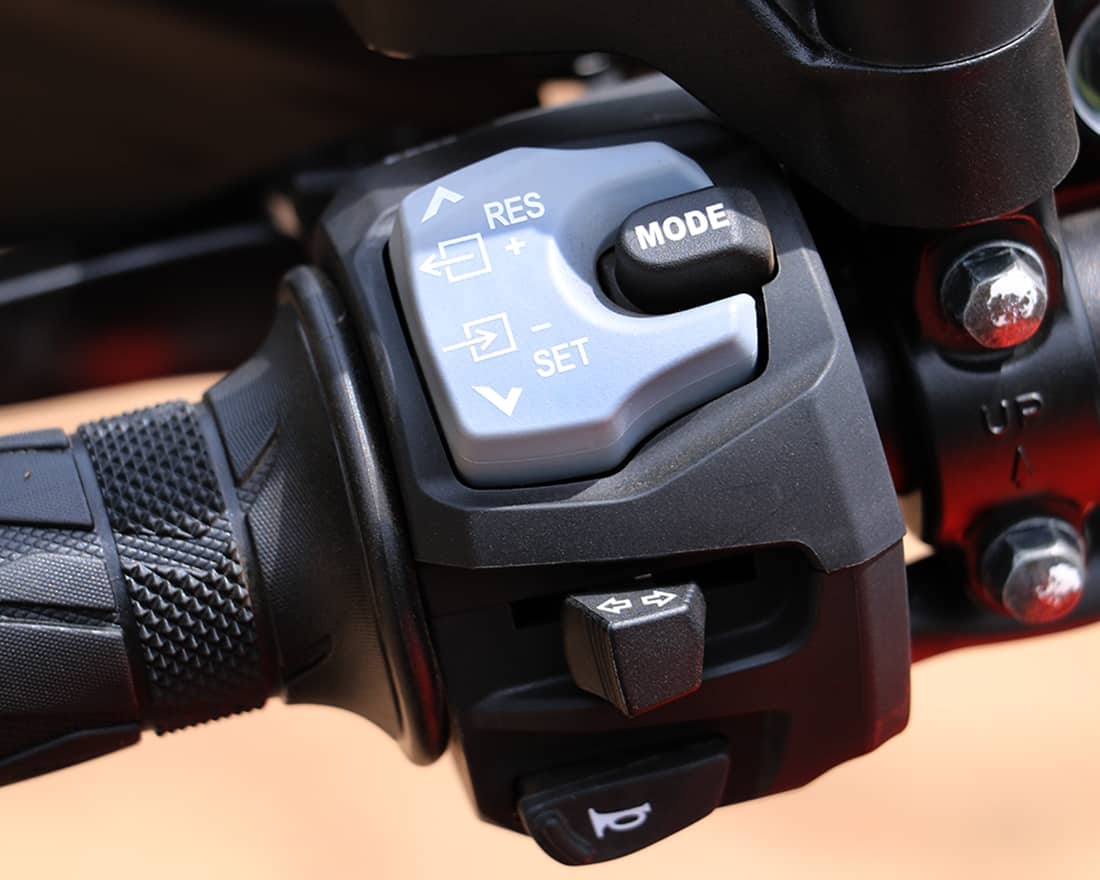 Details of the controls on the left palm, which activate the main navigation functions. The right, among other things, enables cruise control

and it is not V-Strom electronics package and final pricewhich are some of them negative points. It’s not that the electronics are difficult or inadequate (it’s very easy to operate, by the way), but other competitors have more complete packages. And it’s not that it’s overly expensive, but some rivals are betting on ‘more for less’. 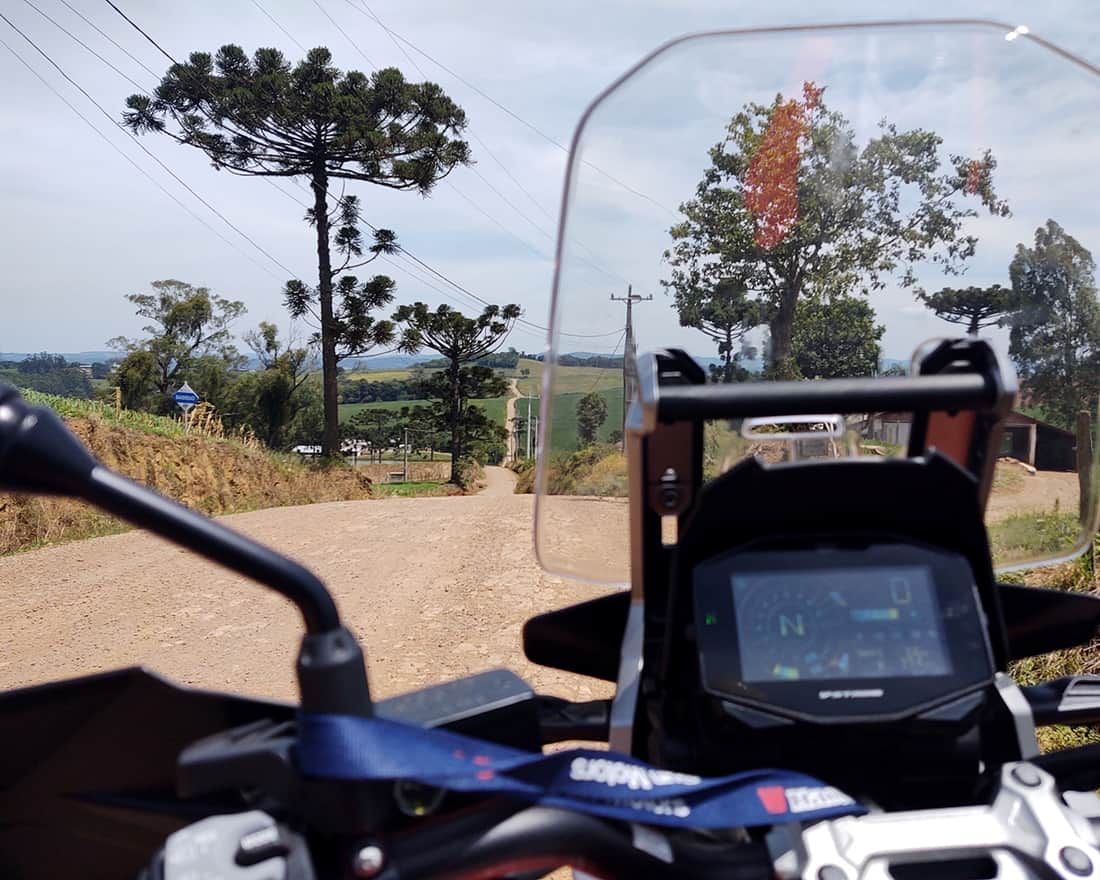 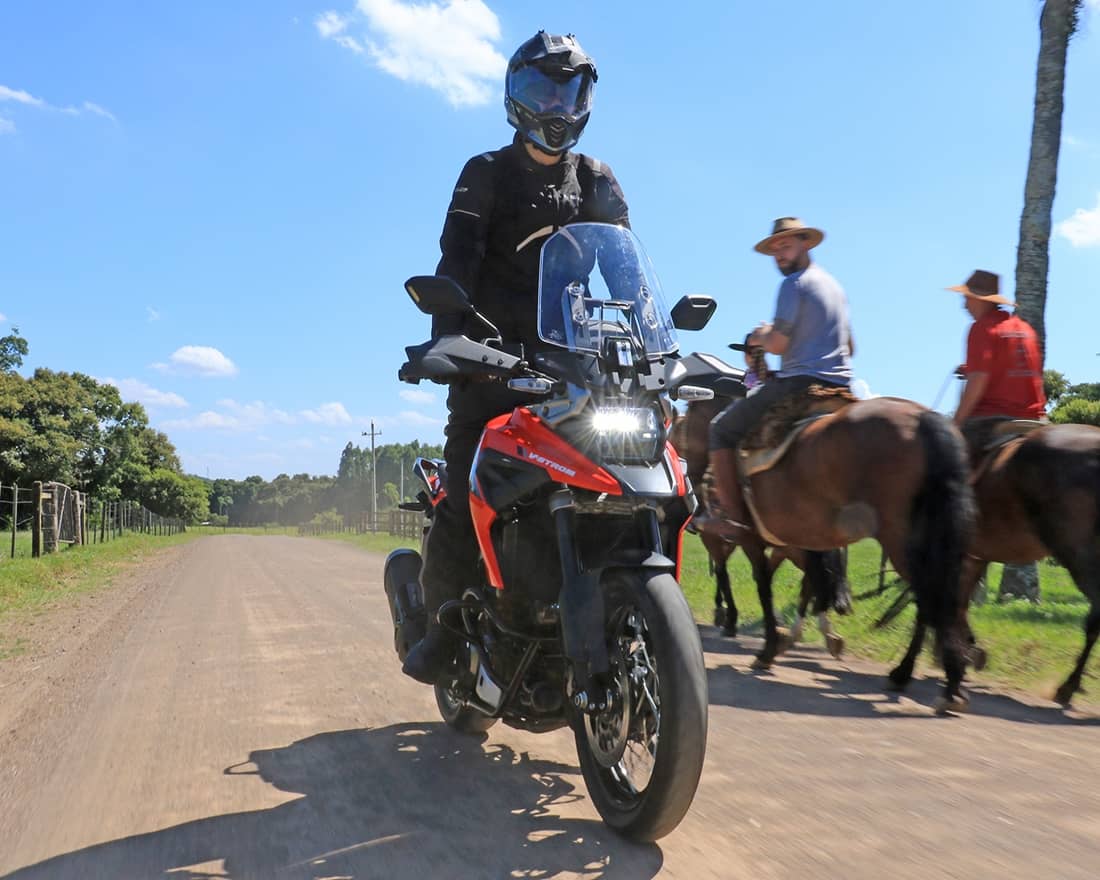 Common on the street, the V-Strom snaps necks wherever it goes. And it also turns gas station attendants into journalists: what motorcycle? Is it a Suzuki? How many cylinders does it have? Are you well? What is the price?

Verdict: is it worth buying a Suzuki V-Strom 1050?

The V-Strom 1050 XT is a capable bike, a real great trail bike. It suffers from incidents on dirt roads and the same nature that it craves for its good torque on paved roads. It has simple yet easy to use electronics that make a clear difference to the ride. In addition, his appearance attracts attention wherever he goes. 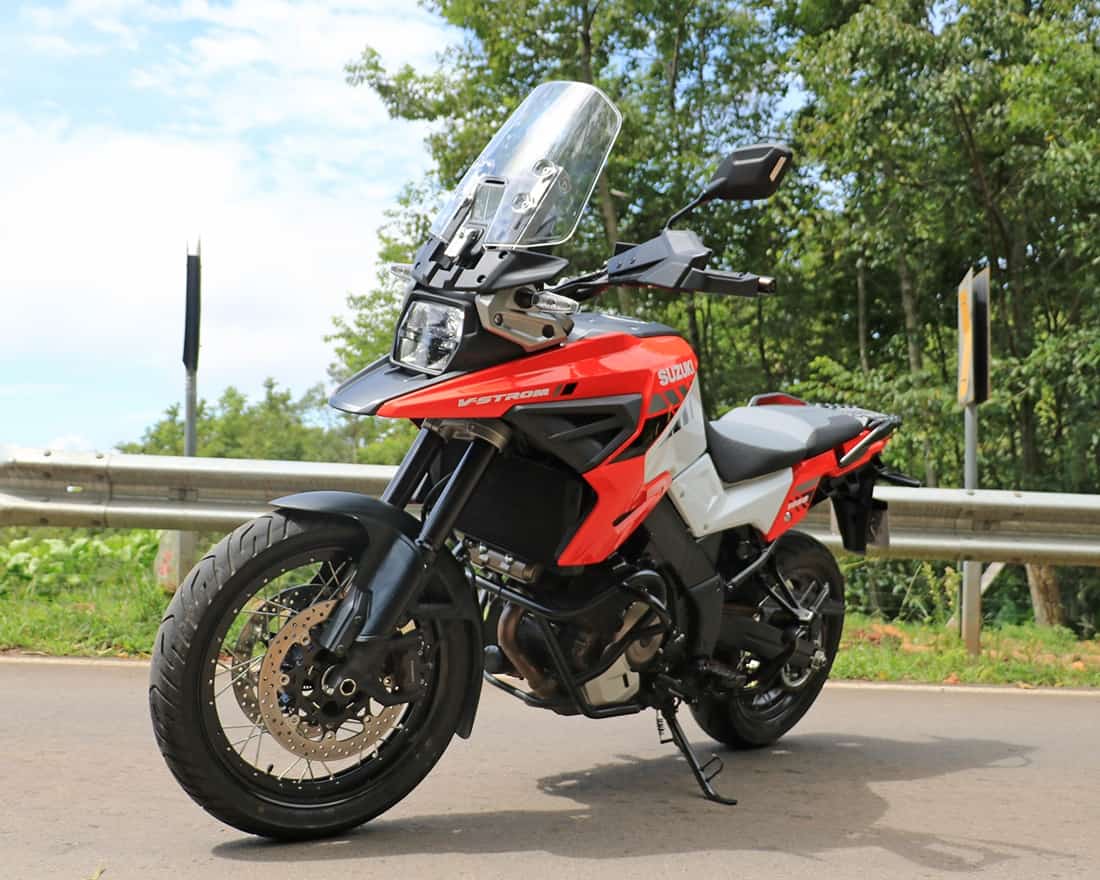 The V-Strom 1050 XT is a capable, fun and well-finished roadster. It can please those looking for a ‘big root’ and those who enjoy a retro look

It can be a good choice for those looking for a ‘big root of choice’, a catalyst followed by light, thin and powerful motorcycles. Plus, it gets points for isolation, after all, there are few V-Stroms out there. To encourage purchases, however, it may be more affordable. 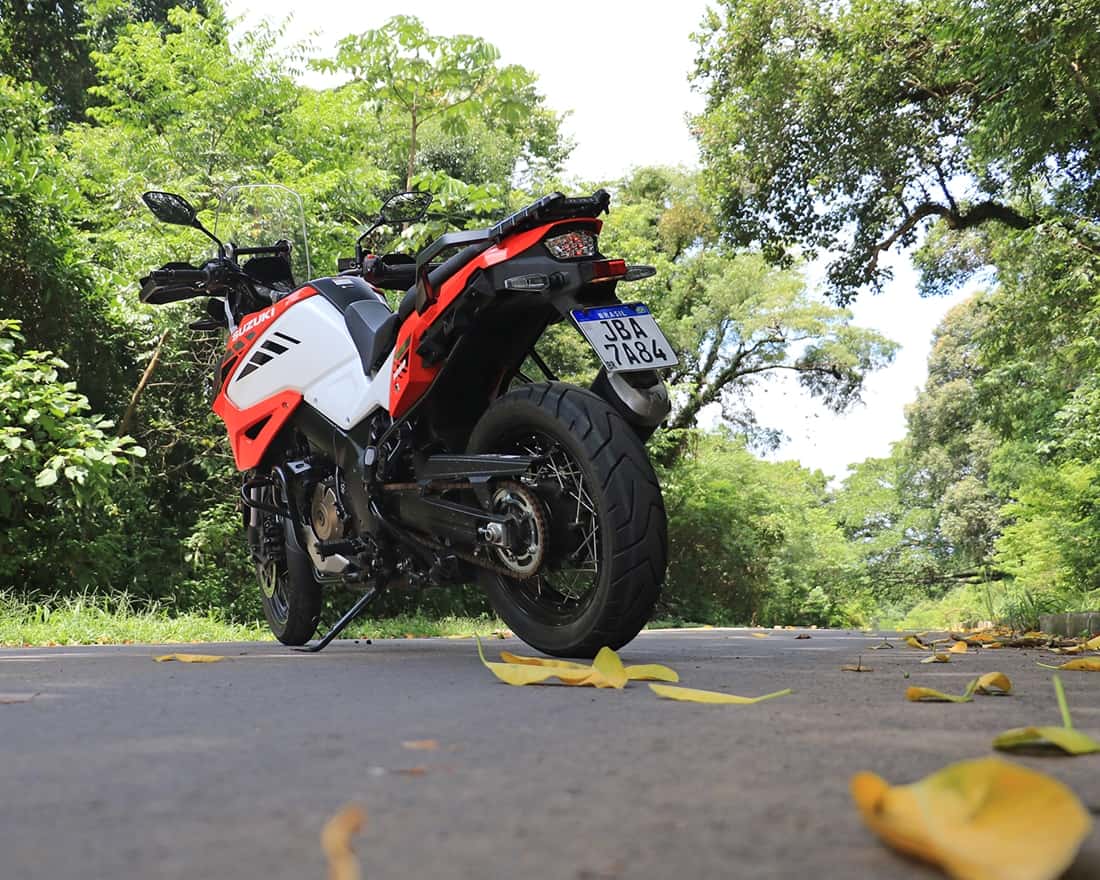 O tank oil encourages transport, with a volume of 20 liters. THE suspension The KYB inverted front end has compression and rebound adjustment, while the rear end has spring preload only. In wheels they are 19 and 17 inch rims, and tubeless tires. Yours Top speed is 200 km/h realaccording to Suzuki data. 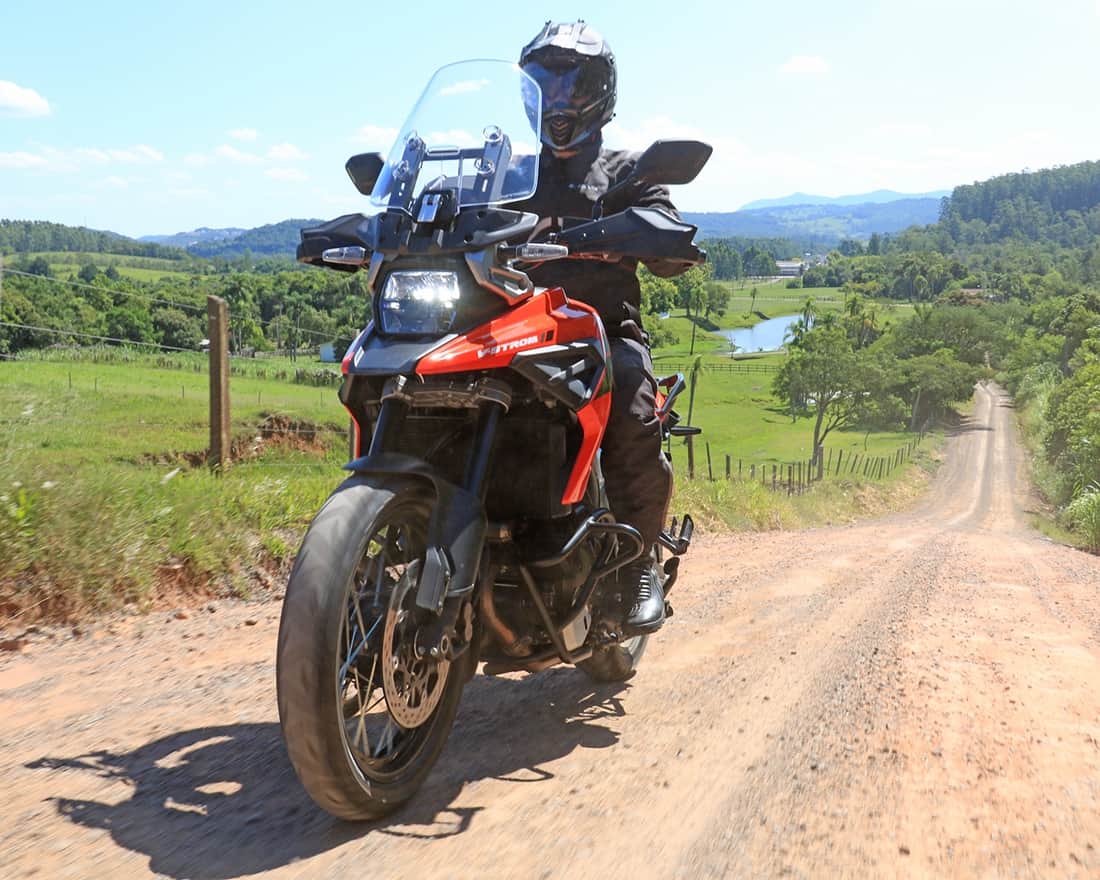 Currently, the V-Strom 1050 is available in Brazil only in the XT version, which is intermediate abroad (between the door and Adventure, with side pockets). So, it has a central position, a 12V socket, an engine guard, an adjustable seat, an arm guard and spoke wheels. Sold for Color Glass Blaze Orange (experimental), Yellow Champion and Glass Sparkle Black, cost BRL 85,900 for both.

Suzuki V-Strom 250 SX: what is the launch cost?

Motorcycle to be launched in 2022: find out what’s new at Suzuki

How much does a Suzuki motorcycle cost in 2022? see the price

Suzuki has a special status and information in the motorcycle line

System 1 | Ferrari: Sainz claims to be ‘on par’ with Leclerc