I have always found the tent more practical. At least you can leave it at the campsite when you go on a trip. But since I was able to go on vacation once with a Ford Transit Custom Nugget and its Westfalia assembled camping gear, I have nothing against a motor home. And then the Volkswagen California is and remains the king. But does the updated Multivan deserve this name? The car deserves a long weekend in the Somme valley to convince me.

Thanks to two-tone body, you’re on vacation before you even leave. Because like a smartly dressed version of the California, this Volkswagen looks a lot more lively than the regular car it’s based on. And my good mood is further strengthened by a sense of belonging to the community along the way: the residents of almost every Californian we pass greet us as if we were family. Even the air-cooled archetypes that cruise at a turtle’s pace uphill and run out of steam once the road starts to climb.

The the popularity of the motorhome has reached its peak during the covid-19 pandemic and, on the road, it is surprising to see the number of new motor homes that go from camp to camp. And most of these have to do with the VW California that my wife and I travel in, despite its very high purchase price. Because it is an investment, with its benefits. Not only because it makes your vacation a little cheaper, but above all because Volkswagen California it retains its value. Even used, it costs an arm and a leg.

You get a old fashioned, but impeccable VW quality. Like the VW Multivan T6.1 on which it is based, the California is very solid. Although the interior is packed with all kinds of cupboards and drawers, an adjustable rear seat, a stove, a fridge and even a shower, almost nothing moves when you move around. on the asphalt road.

It’s also more luxurious than the Ford Transit Custom Nugget that I drove in France a few years ago. Special mention to ease of use of the digital module with which you can, among other things, directly open the roof tent, check the status of the spare battery or adjust the temperature of the refrigerator.

VW Mutlivan California interior design it is different from the previously mentioned Nugget. For example, Ford puts the column in the back, not in the middle, like in Volkswagen. This not only makes it easier to clear fumes from your pot, but it also has room for a full-sized back seat. Nugget was five people, this California ranks fourth. So I left three children at home…

The roof also strikes differently. In the Ford Nugget, the back goes up, so go up the stairs. In the VW California, you ride through the front seats. The front seats can be turned, which allows you to turn the interior into a comfortable seating area. But this remains beautiful, because the available space is just enough.

The VW California also has a table and two chairs, so we were able to have our breakfast in the morning sun. The table is inside the side sliding door, so you have to make it visible from the inside, while the garden seats are hidden in the tailgate. Very practical, though This makes the tailgate of this Volkswagen very heavy.

The Volkswagen California represents uncomplicated cruising pleasure and has exemplary road manners, with a diesel engine that rarely disturbs stability and a DSG transmission that shifts smoothly. But as a motorhome, the VW Multivan has a lot more weight, which it does little street character and forcing the TDI engine tap more into one’s savings. 150 hp can be a little weak … 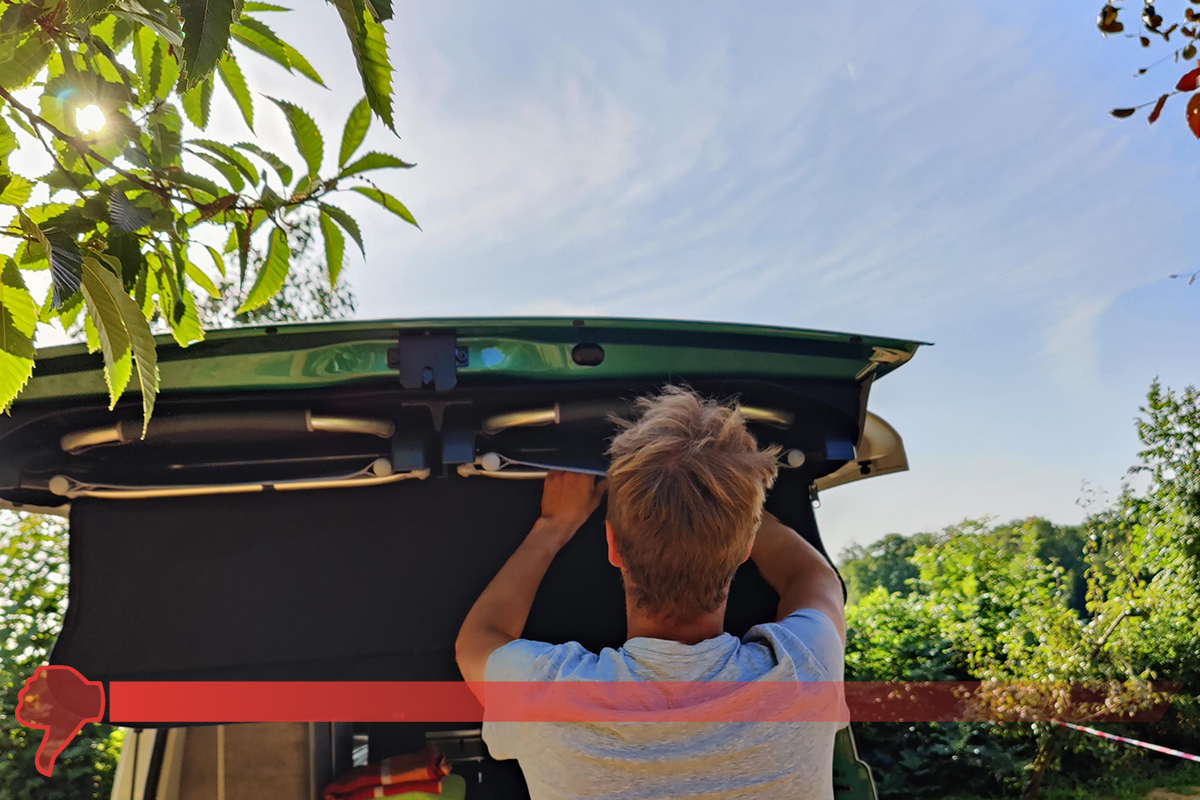 A Volkswagen Multivan California camping trip confirms what I’ve suspected for a while: I love driving. It doesn’t have to be a motor home, because what do you do all year round with that little stove, slide deck or collapsible roof tent? Also, the extra weight weighs on interior space, fuel consumption and driving dynamics. But this is inherent in the concept, of course.

Which is not to say that I didn’t have a good time with the VW California. Despite the unusual owners of the campground – the wife had a beard, the husband didn’t – where we parked the motorhome during a weekend break. A good place, somewhere in the park. But other than that, there are no real accessories. No real toilets, no real showers and no real breakfast as it looked like it had been eaten before it landed on our table. But hey, that’s also part of the charm that camping offers.

Like New! Mazda RX-7 with 475 km costs more than other current sports cars