Toyota’s Japanese engineers, who are now more invested than ever in maximum sportsmanship, do not sacrifice this quality in their range of special models. The new Toyota Hilux AT33 is the clearest example of this, a bet that directly competes with the previously revealed Ford Ranger Raptor while also enhancing its off-road capability.

The new Ford Ranger Raptor will debut in 2023 as a complement to the next generation of the pickup’s range. A generalist brand with an added dash of sportiness, which Toyota does not abandon for its direct opponent, the Toyota Hilux. The Japanese company has gathered contacts and commissioned specialists in Arctic Trucks’ most dramatic changes to create a special and limited edition.

Another collaboration in the over thirty-year-old alliance between the two firms has culminated in the new Toyota Hilux AT33. The Icelandic preparer previously had an alternative for this pick-up truck, which he demonstrated at the start of last year with a specific configuration for overcoming more difficult problems in icy terrain. A more radical plus and the coach’s vision, as this new Hilux variation will be marketed in select European countries by Toyota Professional, the Japanese brand’s commercial branch. 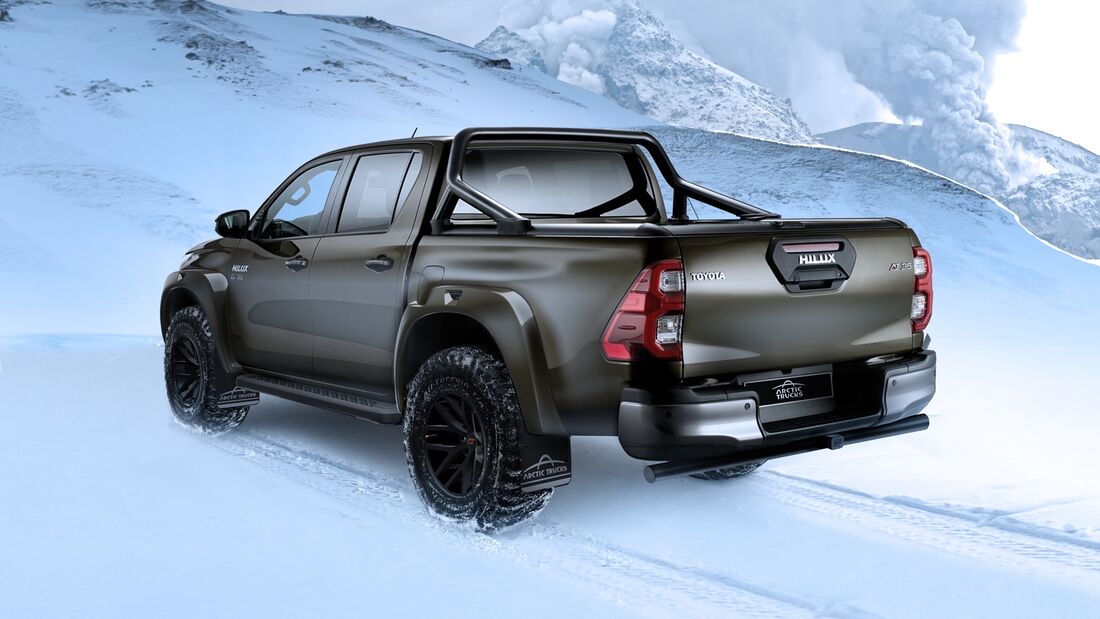 The new Toyota Hilux AT33 will stand out from ordinary Hilux models thanks to an unusual paint scheme, the only one available in an attractive and dramatic “Rust Bronze” shade that contrasts with the 17-inch black-painted alloy wheels wrapped in special tires.

All-terrain vehicles with 33-inch “BF Goodrich” tires and dual inflation and deflation valves. Due to the different dimensions of the new tires, the approach and departure angles, as well as the fording angle, have been increased to 33o, 28o, and 745 millimeters, respectively. And this is despite the addition of side footrests.

Apart from the Arctic Trucks emblems, the new Hilux AT33 is only available in a double cab configuration, providing considerable interior space for five people, along with all the necessary comforts and sophisticated standard equipment. Notable features include the following:

Mechanically, there is only one option: a 2.8-liter diesel engine producing 204 hp and mated to an automatic transmission. It has already been placed up for sale in Italy, with only 80 pieces available in the transalpine country, demonstrating the category of this limited edition with few units available in each market.

The latter is a true symbol in the field of vehicle preparation, capable of exploring the world’s most harsh and inaccessible regions. Since the 1990s, the Icelandic and Japanese companies have collaborated to create several Hilux capable of setting significant records on numerous expeditions.

Based on the Hilux Invincible Double Cab with a 2.8-liter diesel engine producing 204 HP and 500 Nm and automatic transmission, the Hilux AT33 Arctic Trucks retains comprehensive and technological equipment, including a multimedia system with satellite navigation, smartphone integration, and a 9-speaker JBL audio system, dual-zone automatic climate control, a Panoramic View Monitor with a 360-degree view, front and rear parking sensors, and perforated doors.

Arctic Trucks updated the Hilux with modifications to the vehicle’s mechanics, with the goal of further increasing the vehicle’s already impressive off-road capabilities. In particular, we find a unique suspension setup designed in partnership with Bilstein, 33-inch All-Terrain BF Goodrich tires with dual valves, an aluminum skid plate, and oversized front and rear mudguards. The Japanese pick-set-up up’s has been modified to increase the angles of attack (+ 4°), exit (+ 2°), and wading depth (+ 45mm), while maintaining its stability and driving comfort on the road. 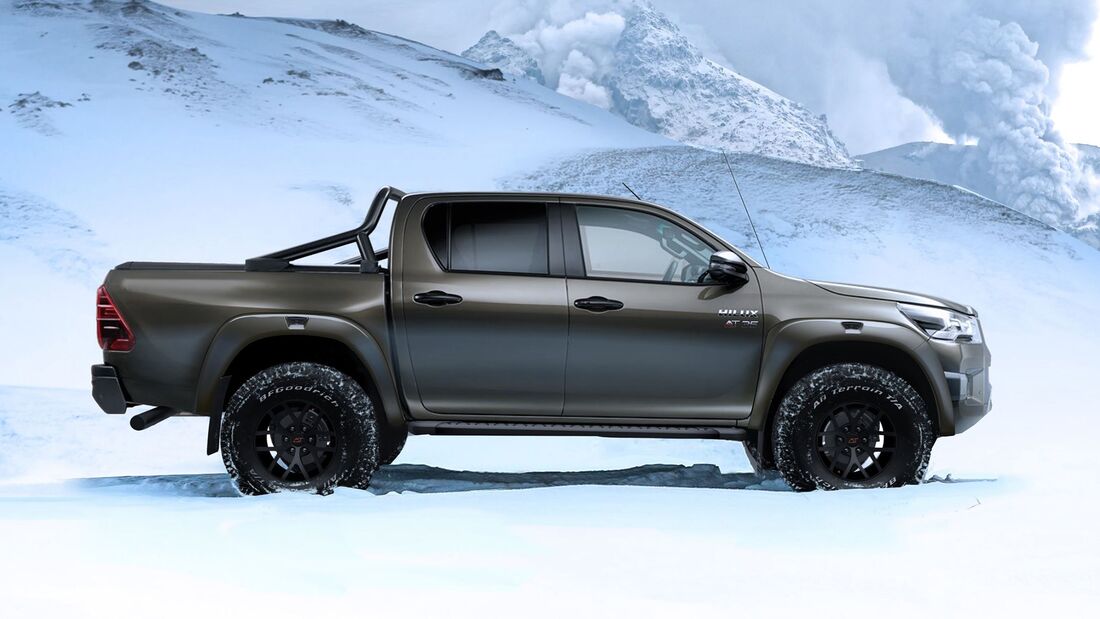 From an aesthetic standpoint, the new black 17-inch alloy wheels, Arctic Trucks emblems on the doors and tailgate, side graphics with the stylized AT logo on the sides, and finally, Arctic Trucks-specific splash guards and sidesteps all stand out. The Hilux AT33 is only available in the “Oxide Bronze” external paint scheme.

The Hilux AT33 Arctic Trucks is already available for purchase through the Toyota Professional network for 56,350 euros, including VAT and on-road costs.

The 2017 Toyota Hilux AT33 is available in three trim levels, starting with the top-of-the-line Invincible. This model is distinguished by its extensive standard equipment, which includes an infotainment system with satellite navigation, leather upholstery, dual-zone climate control, a 360-degree panoramic view monitor, front and rear parking sensors, and a JBL audio system with nine speakers. On the other hand, the only body-color available is Oxide Bronze, which is enhanced by the AT designs on the sides. A unique feature: the enlarged wheel arches are printed with the recommended tire pressures.

However, the true alterations are mechanical in nature. Toyota’s new Hilux AT33 is powered by a 2.8-liter 204-bhp engine mated to an automatic transmission and, of course, all-wheel drive. The suspension configuration is exceptional for this special edition and has been fine-tuned by Bilstein, while the 17-inch alloy wheels are wrapped in 33-inch All-Terrain BF Goodrich tires with double valves. These additions improve the Hilux’s angle of attack by 4 degrees, the departure angle by 2 degrees, and the wading depth by 45 millimeters.

Arctic Trucks’ name is self-explanatory: the Icelandic firm specializes in the modification of off-road vehicles and pickup trucks for usage in harsh conditions such as ice and snow. Favorite vehicle: The Toyota Hilux, which Arctic Trucks adapted for use in the South Pole.

To the South Pole in a Hilux

Along with custom-made items, Arctic Trucks is also offering unique “ex-works” conversions: Customers may buy a full Arctic Trucks package for new cars and then have their vehicle delivered straight from the authorized dealer, complete with tuning measures. For instance, this sort of collaboration resulted in the Nissan Navara AT32 for the German market.

Arctic Trucks has put together a package for the new Toyota Hilux with the strong 2.8-liter engine (click here to read the driving report), which is now available from British Toyota dealers. Icelanders are aware of what this means: the manufacturer utilizes the number after the “AT” for Arctic Trucks to denote the tire size in inches. This indicates that the Hilux AT35 has 35-inch tires (315/70 R 17 in metric).

Even on a rugged off-roader like the Hilux, such extra-wide and extra-high rubbers cannot be readily mounted, which is why the conversion effort is significant. On the body, comparable fender flares are added, creating more room on the frame and in the wheel arches. 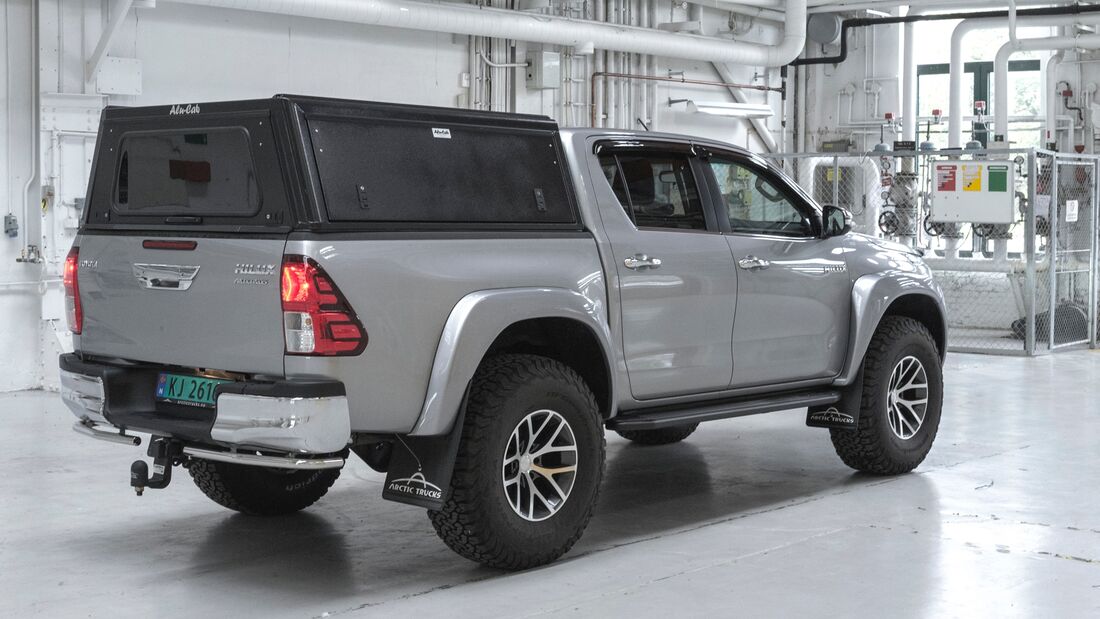 Instead of the conventional chassis, the front uses spring struts with a 40-millimeter lift and the rear has larger spring shackles for the leaf springs, which have a 20-millimeter lift. Arctic Trucks’ dampers are supplied by Bilstein.

The axle differentials are swapped to create a shorter gear ratio that is more suited to the big tires, the speedometer is, of course, calibrated, and a height-adjustable trailer hitch completes the package.

The Toyota Hilux AT35 is available at a competitive price.

Including various little extras like as customized floor mats, running boards, and extended car tools, the Hilux AT35 conversion will cost 18,780 British pounds – this conversion is now available exclusively via British Toyota dealers. Along with the approximately 21,750 euros, there is, of course, the cost of the new Toyota Hilux.

For decades, the Toyota Hilux and Arctic Trucks have been a success story. Icelanders create a gadget based on the incredibly sturdy pick-up truck that operates dependably even in the most remote corners of the world. Conversions, on the other hand, have never been a bonus.

Extreme autumn winds, freezing records, and ice that stretches for miles: Antarctica is the world’s most unfriendly continent – and hence the ideal adventure terrain for the Toyota Hilux. Since 1968, this tough pickup truck has helped establish Toyota’s worldwide image throughout all seven geopolitical continents, and together with famous SUVs, the Land Cruiser has gained an unmatched reputation for off-road capability and durability.

No obstacle is too great for the Hilux (combined fuel consumption: 6.9 l/100 km, CO2 emissions: 183 g/km), the all-wheel-drive pickup truck that scaled Icelandic volcanoes and reached the North Pole. What was lacking was the South Pole, the obstacle that had doomed so many previous missions. That is precisely why, 10 years ago, Toyota made a crucial effort with a specially equipped Hilux.

The statistics are self-evident: Around 19 million Toyota Hilux vehicles sold in more than 160 countries demonstrate that the pick-up truck, which has been manufactured in eight versions, is a real-world vehicle. Whether used as a farm and construction worker, an off-road carrier for relief groups, or a recreational and adventure vehicle, the almost indestructible robust Hilux satisfies the most diversified requirements.

In 2010, for example, when the Indian National Center for Antarctic and Ocean Research (NCAOR) sought transport vehicles for a 4,600-kilometer research trip from the Antarctic Novo Air Base to the South Pole and safely back, the all-wheel-drive vehicle was the primary option.

Toyota South African Motors (TSAM) manufactured four Toyota Hilux for this mission. TSAM is the manufacturer of the pick-up vehicle for the European market. Then came the wild-looking Hilux customizations.

Arctic Trucks, Iceland’s expert in outstanding Toyota 4×4 adaptations, equipped the rugged Hilux for all of Antarctica’s adventures, which have often proved deadly to previous expeditions. The proper selection of tires and wheels is critical for traversing glaciers and snowfields.

Additionally, the wheel suspension and drive train were revised, as were the special crawler gears. However, the 3.0-liter D-4D diesel engine (combined fuel consumption: 6.9 l/100 km, CO 2-emissions combined: 183 g/km) remained in its original condition, demonstrating its dependability on the world’s coldest continent, with temperatures as low as minus 56 degrees Celsius. 98 percent of Antarctica’s continental shelf is buried in ice, and the Hilux had to climb 3,400 meters to reach the South Pole.

The NCAOR researchers’ primary objective, however, was not to reach the pole but to explore the composition of the snow, glacial landscapes, and rock under the ice sheet. The expedition equipment, which included instruments, tools, and spare parts, was likewise large: each Toyota Hilux was required to haul a payload of 1.5 tons and a trailer load of three tons throughout the course of the almost month-long excursion, despite its unladen weight of only 2.2 tons.

Despite the fact that the supplementary heating system was turned on constantly and the Hilux was run 24 hours a day, the pick-up moving on Ferris wheels used eight times less gasoline than normal tracked trucks. Simultaneously, the expedition vehicles’ emissions were lowered proportionately – a critical factor in Antarctica.

Experts believe that what occurs in the global cold chamber has an effect on the whole planet. Despite its superior fuel economy, the Toyota Hilux completed the 4,600-kilometer journey to the South Pole in record time. The trip lasted just from November 10th to December 5th, 2010, due to the fact that the extreme tour was driven at a substantially faster average speed than any prior expedition of equal length.

This trouble-free journey through the world’s most inhospitable region was the start of another ice-cold research drive with record results for the stalwart Toyota Hilux prepared by Arctic Trucks.

Two years later, in only one study season, 10 Hilux, a Land Cruiser, and a Toyota Tacoma traveled 70,000 kilometers in the Antarctic. Three Hilux even reached 9,500 kilometers apiece during the continent’s longest excursion in history. Typical of Toyota, these dependable all-wheel drive vehicles are the world’s most popular pick-ups in their class.

Could the Toyota Hilux be a worthy replacement for the Skoda Kodiaq?