After our test of the “small” version of 476 horsepower, we got behind the wheel of the more powerful version of 598. If such an increase in power may seem insignificant today, the Audi RS e-tron GT does not encourage the knife of driving between the teeth.

In the category of electric and sports sedans, there are still not many models, but the segment has filled up quickly in recent years. If the Tesla Model S, even in its last Plaid version, cannot be considered a real sports sedan, this is also the case for the Porsche Taycan and the rest of the Audi e-trons, its two main competitors. They are definitely more powerful compared to the American sedan, but they still retain ridiculous agility and a high level of comfort.

In Audi’s case, the band’s electric and sports sedan is the RS e-tron GT. After our test of the “smaller” model, we took control of the more powerful, with almost 600 peak power, a performance almost identical to that of the Porsche Taycan Turbo S, all in surprisingly comfortable conditions. An iron fist in a velvet glove, you said? 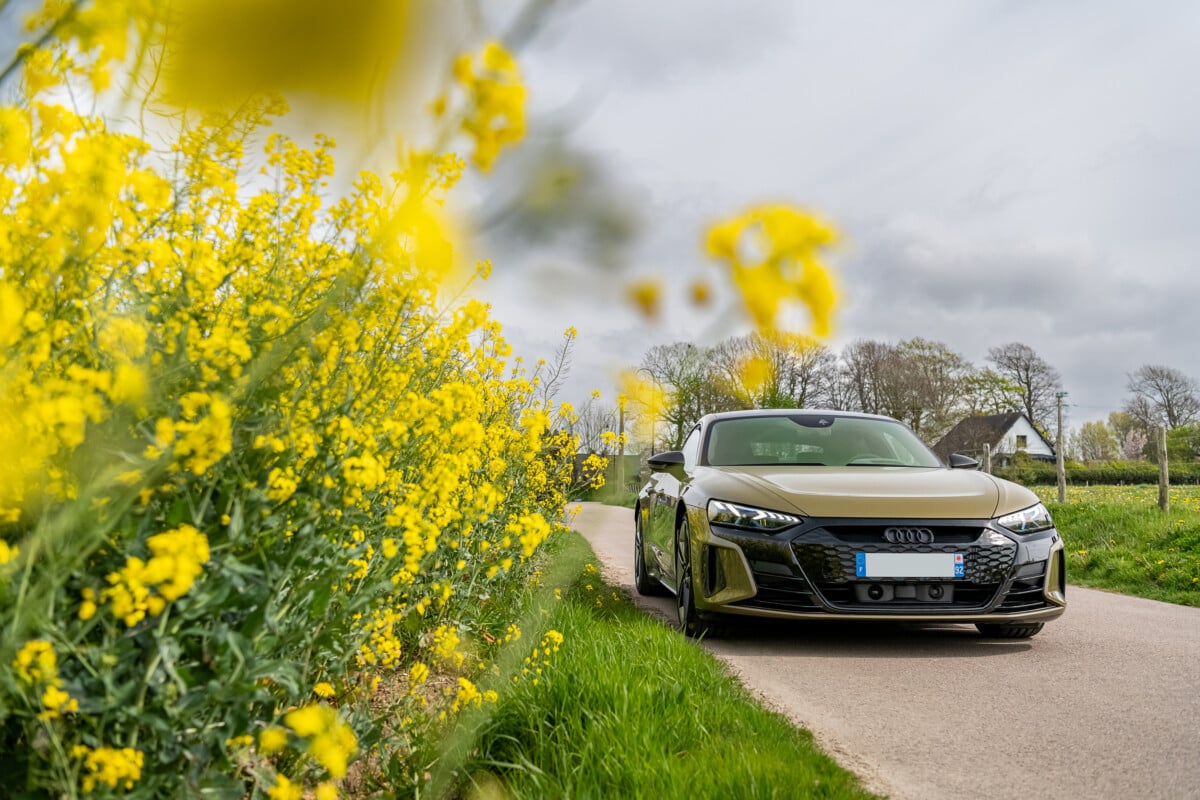 Contrary to what one might think, the Audi RS e-tron GT is a big car, very big even, as it is almost 5 meters long and almost 2 meters wide. The E-tron GT is Audi’s second electric model and is based on concept car eponym presented at the Los Angeles show in 2019.

The production version uses almost the same lines as the concept, for an impressive final presentation. If, aesthetically, the relationship with the Porsche Taycan is not obvious, technically, they are, in a few details, the same two cars.

On board, the Audi RS e-tron GT may be 5 meters long, but it is not really a reference in terms of space. In the front seats, we feel a little cramped, with a center console that reduces space on board. 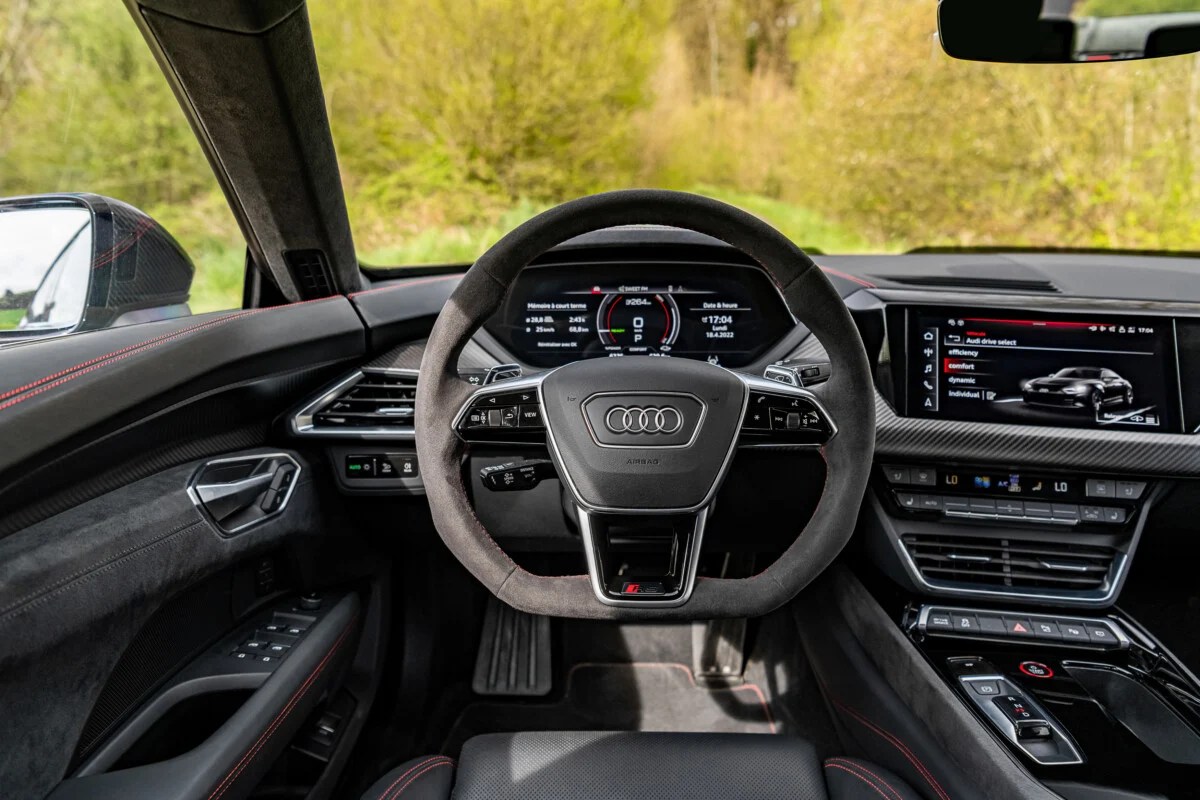 In the back, the seats are very small and the headroom is fine for an adult. Knee space is acceptable on average for such a large car. As for the trunk, it offers a capacity of 405 liters, which is not bad in itself for an electric car, but the second trunk of 81 liters in the front probably won’t be too much.

Technically similar to the Porsche Taycan, the cabin is completely different. If the Taycan wants to be more refined, especially due to the presence of three (or even four) screens, the passenger compartment of the Audi e-tron GT has two touch screens and some physical controls.

Ergonomics are generally very good and the shortcut keys like the cockpit are nice complements to the touchscreen. The screen benefits from neat graphics and well-organized menus, as usual with a ringed brand. It brings together the entire infotainment system and controls related to the vehicle’s consumption and energy. Of course, the set is compatible with Apple CarPlay and Android Auto.

In the first covered kilometers, unlike the e-tron GT quattro, its younger sister, it is clearly not obvious. Looking like a senator, the e-tron is aptly named the GT, with a surprisingly smooth ride and damping tuned down to the small onions. It’s comfortable, even in the back seats, and the harshness of the road is mitigated by the well-controlled suspension.

With the RS badge of course, it’s the sporty aspect that will impress us. And in general, as with the smaller version of the GT quattro, the RS e-tron GT is a step below the Porsche Taycan Turbo in terms of changes. Our model has an exciting level of comfort, even in “Convertible” mode with 600 horsepower under the right foot. The Taycan Turbo still excels in terms of driving sensation at sustained speeds, with Audi preferring to have it both ways and not sacrifice comfort at the sacrifice of sportiness. 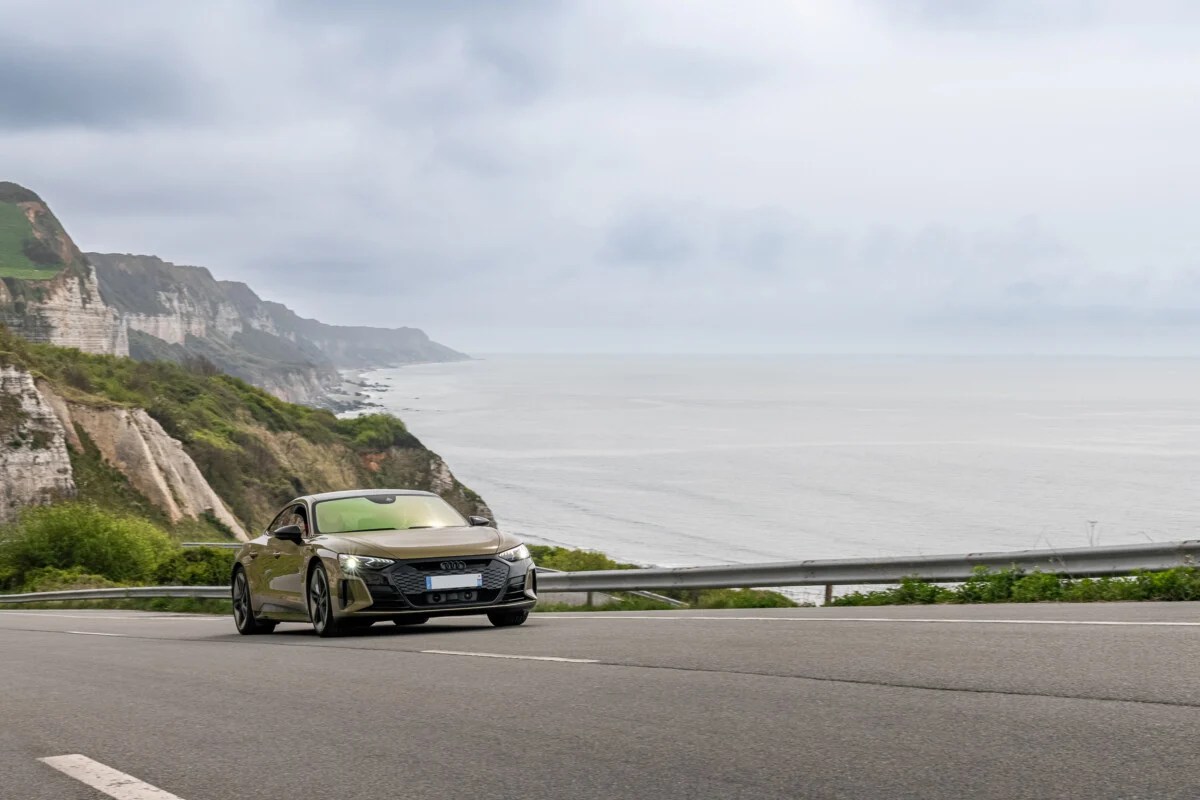 On the other hand, the speed settings have nothing of a comfortable car. When you press the right pedal, the throw is spectacular. Acceleration from 0 to 100 km / h takes 3.3 seconds, the time of the best supercars on the market.

When the Taycan is pushed to the ground, the RS e-tron GT is surprisingly playful, even if the Michelin Pilot Sport 4S tires offer better grip than the Goodyear tires we had during our first test over a year ago.’ year. Something a little more assured on wet surfaces.

Audi is less incisive of the front axle, but starts more easily from the rear axle. The e-quattro all-wheel drive allows the distribution of up to 100% of the torque to the rear axle only, which also makes this little overdrive a lot easier.

Then there is another thing to consider about this type of car, it is inertia. And despite all the technological equipment that equips our Audi (rear-wheel steering, Sport-controlled rear differential, etc.), the 2,347 kg empty weight of our test model should not be underestimated.

The Audi RS e-tron GT quattro has two electric motors; one is mounted on the front axle and the other on the rear axle. It develops 598 horsepower (646 horsepower with Overboost) and 830 Nm of torque. 0 to 100 km/h is claimed in 3.3 seconds and top speed is 250 km/h.

The powertrain is the same as on board the Porsche Taycan, only the power management is modified. The Audi RS e-tron GT has a two-speed gearbox, allowing you to have power at all times, even at unmentionable speeds. These two gears are based on three drive shafts, while the rear axle also has a controllable lock. 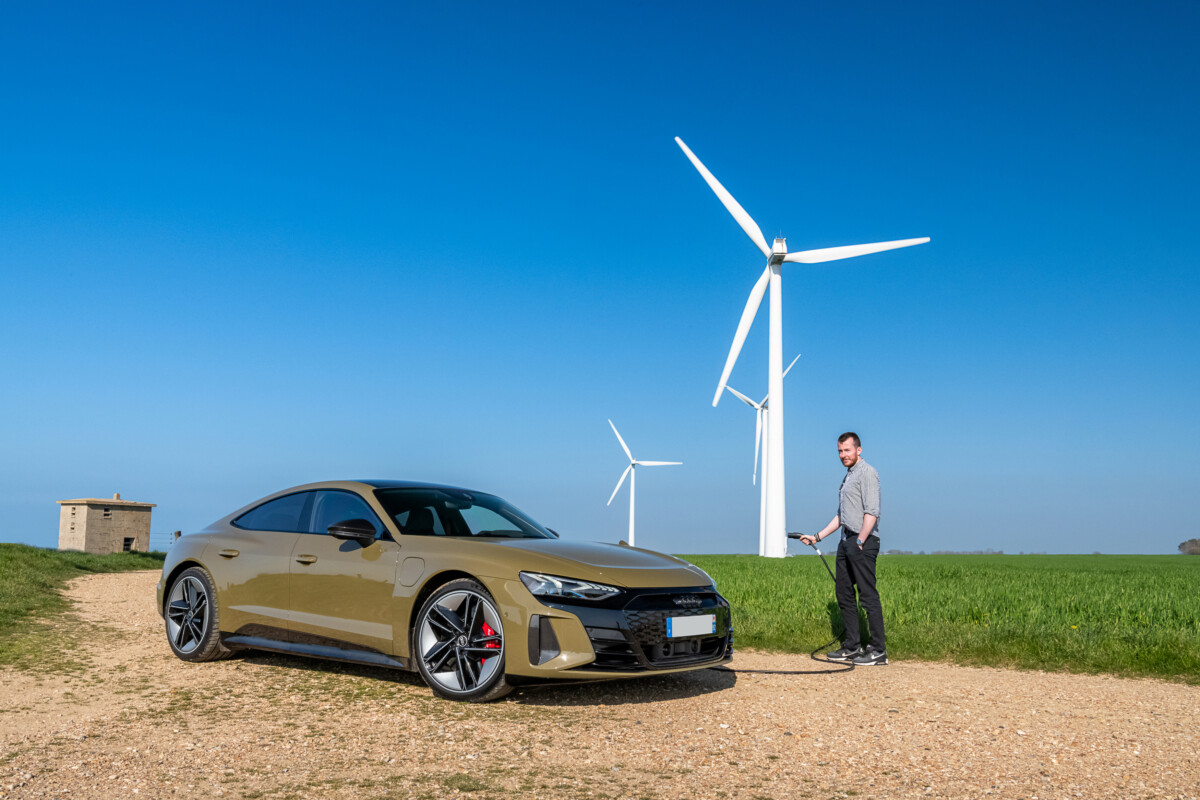 Audi advertises a recharge from 5 to 80% in 22.5 minutes with a maximum power of 270 kW. It will take about nine hours on a 11 kW alternating current plug from 0 to 100% and about thirty hours on a normal current.

In terms of the battery, the car is based on an 800-volt architecture, not 400, which allows for a more stable distribution of performance. The battery has 33 modules, each with 12 cells, ie 396 cells in total, with a total capacity of up to 93.4 kWh (including 86 kWh useful). Each module has an internal control unit to control voltage and temperature. This is connected to the cooling circuit via a heat pump, so the battery can be cooled or heated to be within a reasonable temperature window.

As for autonomy, Audi advertises 472 kilometers with one charge. In general, this is data that can be held for general use, a car without a great desire of 600 hp and 2.3 tons in standard. It should be said that its excellent Cx (drag coefficient) of 0.24 allows you to collect precious few kilometers compared to SUVs with their cinderblock aerodynamics.

Over our 700 km test, we noted an average of 23.5 kWh / 100 km, and consumption is not quite representative of daily driving. Between sporty driving on small state roads and highways over 400 km, we thought that its use would increase, but overall it remains good for a car of this size. In driving, we were able to go under 18 kWh / 100 km. On the highway, at 130 km / h with all the comfort systems on, the Audi RS e-tron GT can travel about 330 km on a charge, according to what the on-board computer told us. 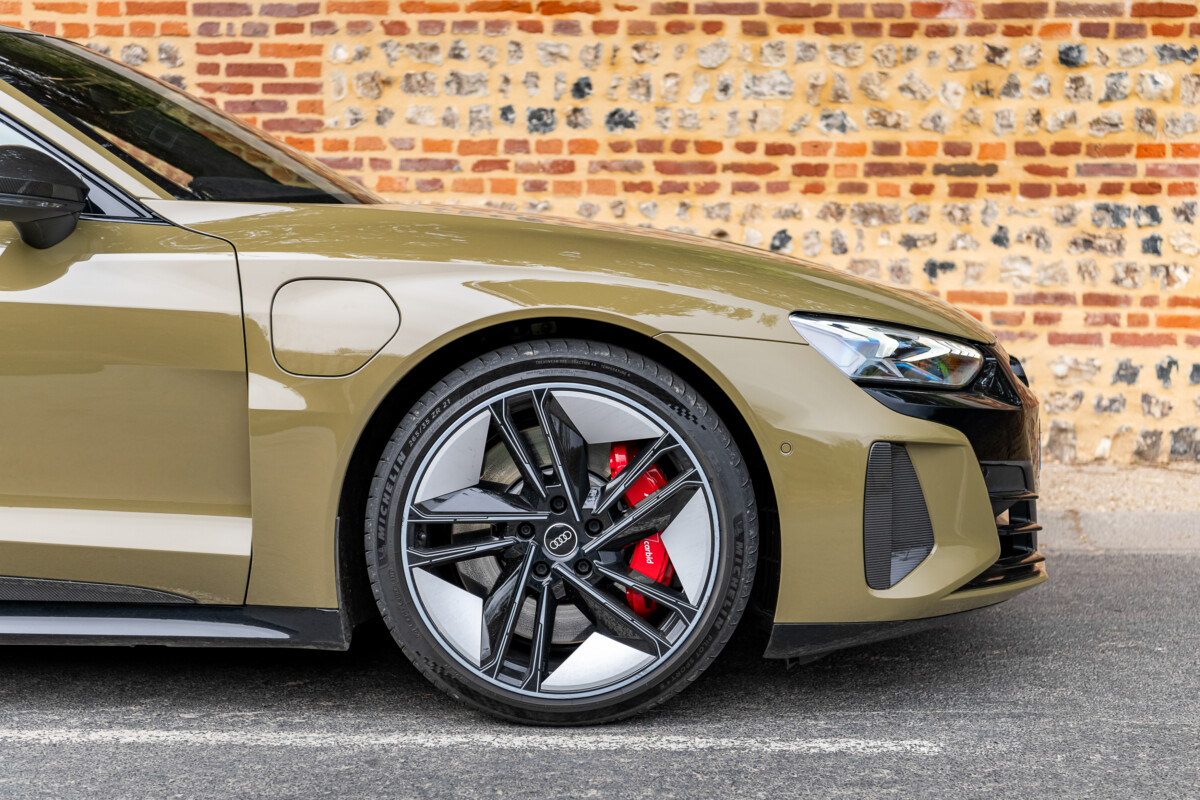 The Audi RS e-tron GT is available from 140,700 euros, almost 40,000 euros more than the base price of the e-tron GT quattro. Indeed, the endowment of the equipment is not the same, but the “small” version is not worthy in terms of performance with 0 to 100 km / h in 4.1 seconds.

The hierarchy is compelling, the Porsche Taycan Turbo is the most expensive and is negotiated from 156,334 euros, without options. On the other side of the Atlantic, there is a Tesla Model S Plaid that promises hair-raising performance at an almost “gift” price. 0 to 100 km/h is announced in 2.1 seconds, top speed is 322 km/h and the price is 119,990 euros.

What is the Reference Premium Electric SUV?