Late last month, we had an interesting (and candid) conversation with Luis Rezende, president of Volvo Cars for Latin America.

But what advantage does Luisinho have? The “best” thing we talked about is that he finds himself in one of the most innovative manufacturers, if not the most (Tesla is on another level).

Since it was a quick talk of about 45 minutes, I focused on three main points in the talk.

Since not everyone follows or knows the ins and outs of the automotive industry, I will introduce the main idea that was discussed with him so you can better understand the context.

In the United States, last year was a good year for everyone in the auto industry. But when we say it was better, it’s not “better”. It’s something like 10x(better)³.

For example, when we visited the M. Benz dealer in Los Angeles, they increased the prices of cars as a “market adjustment” (for us Tupiniquins, it would be a premium) by 35% and, however, they did not have enough cars to offer/sell.

And not only was last year good for the industry, but 2020 too. And then we had a very strong and very interesting movement from large groups of With concessions listed on the NYSE, such as: Asbury (ABG); Lithium (LAD); Penske (PAG); AutoNation (AN); Group1 (GP1) and Sonic (SAH).

And what does that mean? That groups of publicly traded traders have decided to go shopping! They decided to aggregate more and go buy more sellers.

In the first nine months of last year alone, publicly traded financiers invested more than US$3.5 billion in M&A.

This is a worldwide movement, since in the automotive industry (in the retail sector) it is important to have scale to increase your business.

So, going back to the Brazilian market, what did we have? We had Fernando Simões from Simpar (in the best Gremlins style) increasing his number of dealers, starting with around 10 stores and jumping to around 60 dealers, in a move of about R$ 800 million.

The question I asked Luisinho was to know what his opinion is about these new investor groups in formation, like Simpar, because (from the point of view of this undergrad) we should have an IPO soon, since the Simpar group is the truth, Cade still need to approve) Volvo franchisee in Maranhão.

In addition, this franchisee (Simpar) will be bigger than its sponsor (Volvo) in the Brazilian market. And there is always that fire of vanity…

Luis, in his style gentleman of course, he told us that “there is no reason not to do that [aceitar o novo grupo]”. He indicated that he already works with large groups such as Intercar (Volvo dealership in São Paulo, which is part of the Itavema group, whose owners founded Tegma and today is one of the company’s largest shareholders).

In fact, Luis was very open in our conversation, where he reached that clear voice, that not everyone has the courage to say: “for me. [Volvo] It even makes it easier: the compliance and governance part should be more strict than traditional governance”.

In short, the merger of these large groups (which may come to the Stock Market) will not make you uncomfortable! Instead, it would make his life easier.

Let’s go back to our introduction. One of the first steps that the Stellantis group (FCA merged with PSA) took, at the beginning of 2021, was to kick their dealers in Europe with a flying kick in the chest.

What did they do? They submitted a notice to all advising that the existing contract between the parties will be terminated in June 2023, and the new system will come into force.

The new system, according to people from Stellantis, is a way to anticipate several changes that have been taking place, such as: online sales; electricity; omnichannel approach with customers, as well as other control measures (control of preventive exemptions, for example).

And here in the land of Tupiniquin? In summary, there is a law that governs the obligations between the parties (the collector and the donor). And when someone decides to break the contract, he has to pay compensation. This compensation is, in general, a percentage of the income that the concessionaire has had in the last two years.

In a very strange example, it is as if the concessionaires had their 40% fine on the FGTS balance, along with a good portion of the workers. But, in the same way that labor reform made this move easier in the labor market, this movement is taking place in the distribution sector.

The calculation is simple: if the car is sold directly by the automaker, which begins to get a commission for it, and this car is no longer in the seller’s stock, then there will be a strong reduction in income (not in income).

With that, the financial liability that would have to compensate the concessionaires, drops to “practically zero”. That is, maybeall the high investment you made to build the shop, furniture, equipment and training that you thought to pay for a few years may “go bad” in the end!

And what does Volvo have to do with that?

It, at the beginning of last year, initiated the process of direct sales of all its vehicles. That is, the brand is responsible for the stock of all its cars. Overall, it took a step ahead of what the Stellantis people want to implement in Europe.

And, a few months from now, the potential liability it would have (payment funds) should be “discharged” if it disqualifies any sales, to the overall delight of the company’s legal/compliance/financial organization.

We asked Rezende, then, if this is a trend that is here to stay in Brazil.

First of all, Luis made it clear that they were not as Machiavellian as I painted them (and they were not equal, but the measure was “du caramba”, that was). He pointed out that the move to central inventory was only possible after discussions with his entire dealer network.

And he went further: “we understood that we are a niche”. If we think that, within the amount of sales (on average, they sold 1,200 cars per month last year) we had to divide between our 40 points of sale, by version/model/color, the probability that the customer arrives at that point. and not having the car he wants will be great! “Also, consider this list managed by the seller?”

Remember: Currently, the rate of floor plan [espécie de financiamento concedido às concessionárias para a compra de veículos] of service providers is about 1.4% per month. For Luis, there would be pressure to push the sale of the car to the customer. And the chance of the buyer not leaving completely satisfied will be great!

Finally, he insisted: “I need a business to sell a car. I don’t have the internal strength or scope to drive away a customer of this level”.

The opinion of this undergrad is that this practice adopted by Volvo is excellent. It increased sales, kept car prices consistent, regardless of location, and increased customer satisfaction (and, with it, loyalty).

What? has there been a decrease in the seller’s margin? Of course it is. Imagine putting a car in the range of BRL 400,000 in stock for 60-90 days with a floor plan rate of 1.4% in the morning? That financial cost alone would eat up more than half of the seller’s amount!

But, as Luis said, Volvo is a famous brand – it can do it. Now, for volume products, the story is different.

Luis said that both, car manufacturers and dealers, built history together, with all the transparency that exists in the dialogue between the parties. That’s why Volvo’s current direct sales approach has been successful.

He also said that what dealers cannot allow is that the loss of the right to compensation prevents the growth of the brand and themselves, since “with the lack of products in the world, it is very easy to throw these cars anywhere in the world.” . And then, the biggest loss is for the dealer itself, as the parent company will continue to sell the car. Already they…

In fact, there was no question here, but a student’s “tiki and teco” daydream.

What we think: what happened recently? It is true that the demand for electric vehicles is increasing worldwide and, with it, the production of batteries has been amazing. With that, every passing day they become cheaper and more available, causing the demand for this type of car to increase even more. However, the price of energy has been increasing significantly, which makes the car lose some appeal. 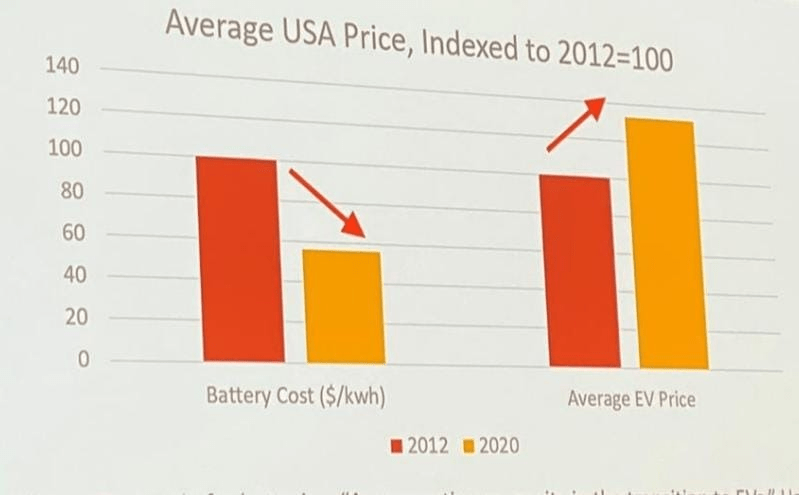 In addition, speaking in the United States, there is a certain “fear” of relying on some inputs in the production of batteries needed from China. For example: 51% of all lithium, 62% of all cobalt, 52% of all nickel and 65% of all cathode comes from there. Which would turn China into a sort of “OPEC” for these materials. Just look at the price changes for these devices, which was scary!

And finally, we got that shipwreck carrying BMW, Porsche and VW electric cars. It is thought that the fire that caused the vessel to sink started in the batteries of the electric cars – with the ship at the bottom of the sea, we will never know the exact cause of the sinking. But, if this hypothesis is confirmed, we should have a significant increase in sea freight and insurance for this type of vehicle.

From the back, Luis did not know the cause of the sinking – as I said, the battery hypothesis is more gossip than fact. He believes that burdens can increase for “n” reasons, such as war and/or global inflation, but not only in cases.

Regarding battery production, he explained that Volvo adopted a more strategic vision. They believed that the battery would be a product that could be bought anywhere. But that did not turn out to be true. And they realized that restrictions on battery supply began to appear when big players began to “play” in this segment, such as VW, for example.

What did the Volvo Vikings do? The brand built a battery factory in Sweden with the capacity to produce 500,000 batteries per year.

And then, in the conversation, there was that paddock bill. Luis explained that if I intend to sell half of my portfolio in the electric version in 2025, and the forecast is 1.2 million units, then I need 600,000 batteries. With my own factory, I guarantee to achieve my goal!

In other words, they protect themselves a lot in this scenario, because this is the CORE for their mission!

Finally: electric or hybrid? Won’t the electric continue to be a niche vehicle?

For Luis, the biggest problem is still the lack of a portfolio. He thinks that when brands like GM, Kia, among others (who have interesting products) enter this market, they tend to start. Apart from that, there is still a need to create a payment network to accelerate the demand for these products.

After a conversation that lasted almost an hour, these were the main insights we got from the president of Volvo in Latin America.

But this subject (electric cars) is a topic that has been on the agenda for more than a century, and without a defined solution. 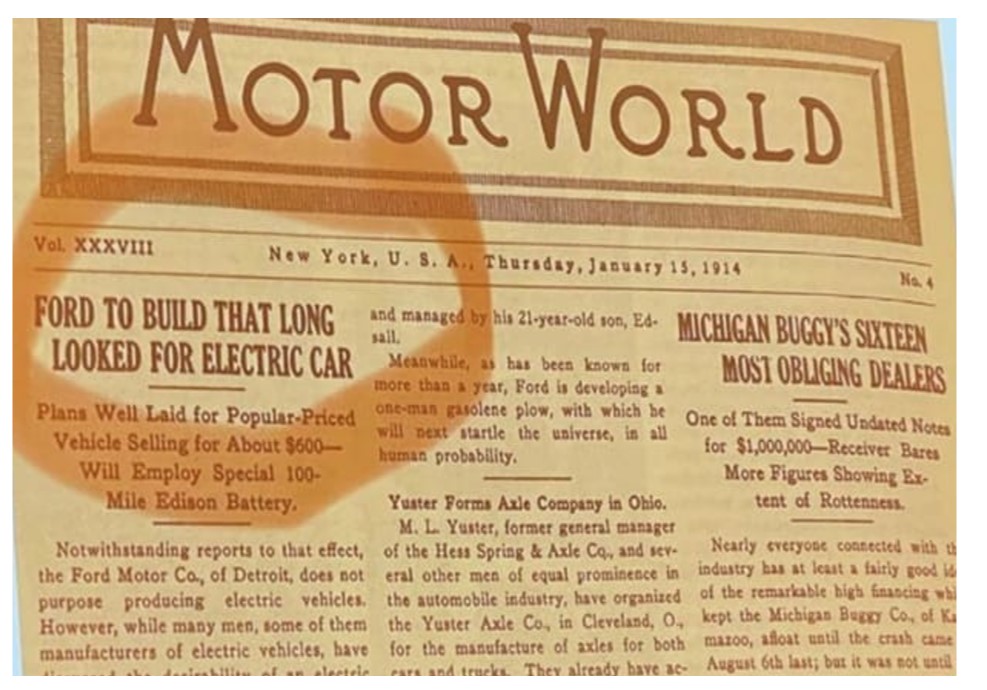 So what do you think? If you have any questions, email me here.

electric cars will use the Unreal Engine, a popular video game engine