The last example of the Chiron Super Sport 300+, created in honor of the model that set the world speed record at 490 km / h, has been released – ending the production of this limited edition of 30 cars. This Chiron Super Sport 300+, which broke new ground in outright performance, is a true engineering masterpiece. It also features, like all 300+ models, exposed carbon fiber bodywork and dual orange racing stripes. When the Chiron Super Sport 300+, then driven by Andy Wallace – Official Bugatti Driver – broke the 300 mph barrier in 2019, it caught all eyes; a production car has never achieved such speed. It made history immediately and remains to this day as a model in the endless quest for extreme performance and speed. Shortly after this success, during the event to celebrate the 110th anniversary, the brand announced the production of a limited series of 30 copies of the Chiron Super Sport 300+. The last copy has now gone to join its new owner.

Christophe Piochon, President of Bugatti Automobiles, said: “In the history of Bugatti, there have been cars that have defined their era. The racing modified Type 35, the refined luxury of the Type 41 Royale, the Type 57 SC Atlantic set new design standards and today the Chiron Super Sport 300+ reaches speeds that we thought were unattainable for a production car. Its excellence has made it famous in Bugatti history and we are pleased to present these 30 examples of the Chiron Super Sport 300+ to some of our most passionate customers. » To reach this unprecedented top speed of 304.773 mph (490.484 km/h) the Chiron Super Sport 300+ had to exceed the high standards already set by the Bugatti Chiron in terms of power and aerodynamics. A redesigned version of the popular 8 liter W16 engine increases the Chiron’s output by 100 bhp, to a total of 1,600 bhp. World-class engineers have developed a new fuel management system for the engine and transmission of this super sports car while optimizing the software that manages the engine, transmission, powertrain and turbocharger.

But power is nothing without stability, especially at speeds never before achieved by a street-legal production car. While remaining faithful to the timeless beauty of the Chiron’s design, the Chiron Super Sport 300+ has a “long tail” silhouette that increases the length of the car by approximately 25 cm, which allows laminar flow to pass over the bodywork, and thus reduce. aerodynamic store by more than 40%. The air curtains adorning the front corners of the hyper sports car dissipate the excess air pressure on the sides of the car. Meanwhile, air vents in the wheel arches and behind the front wheels direct additional pressure from each wheel arch, reducing drag while delivering less power. 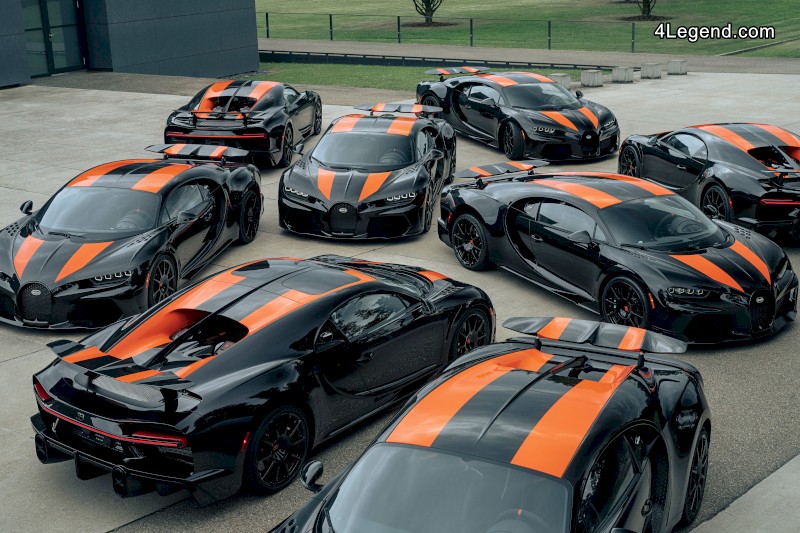 The extensive use of carbon fiber on the Chiron Super Sport 300+ extends to the engine cover and even the windscreen wiper. With a significantly reduced weight, this super sports car can push the limits of performance even further. Subtle touches, such as the Bugatti “Macaron” logo in real silver and black enamel, also reinforce the feeling of isolation and inaccessibility. Light and very strong, the magnesium alloy rims have a unique color called “Nocturne”.

30 copies of the Bugatti Chiron Super Sport 300+ have now been delivered. Each of these cars, among the fastest and most technologically advanced, represents a unique piece of automotive history. Bugatti presents the first Chiron Super Sport to its customers

How many millions are there in this picture? Bugatti is introducing a new version of the Chiron Super Sport 300+

See the 10 fastest production cars in the world, capable of exceeding 500 km per hour | Curiosity

It’s over: production of the Bugatti Chiron will end with a special series