Porsche, performance and high level of environmental awareness: That sounds like a contradiction – and yet all of this can be integrated into a sustainable future. Additionally, instead of completely replacing defective batteries in electric vehicles, they are repaired, which is also much cheaper, as the comparison shows. In addition, Porsche does not participate in the race for the largest batteries of electronic cars for good reason. And if you want to keep running your combustion engine: Porsche will soon be producing large quantities of environmentally friendly and artificial fuel, called e-fuels. Porsche’s sports path for a sustainable future is clear and is in line with enthusiastic driving.

0 grams of CO2 emissions: Porsche wants it fast and is willing to pay a lot

Porsche’s mission is clear: by 2025, Porsche will invest 15 billion euros in electricity and digital transformation. More than 800 million euros of this goes into digital placement each year. By 2030, Porsche is targeting CO2 emissions in the entire value chain. In simple language: the basic premise is that this means the emission of CO2 of 0 grams. Development in electromobility plays an important role in these goals.

According to Porsche, about half of all CO2 emissions in the life cycle of an electric vehicle are produced during its manufacture. This includes the extraction and processing of raw materials. The second major factor is operation, which is determined by the combination of energy, charge and efficiency of the vehicle, and the driving style. Recovery and recuperation at the end of the cycle tends to have lower CO2 emissions.

Among other things, the drive battery actually has a significant impact on CO2 emissions in the life cycle: about 40 percent of the carbon dioxide produced during the manufacture of one Porsche Taycan can be found back in the battery. In other words: the size of the energy storage device is largely responsible for the production equity of the electric car.

Porsche analyzed the wishes of its customers, who place great importance on driving dynamics and at the same time want short-term driving and fast charging on long-distance trips. More than 95 percent of customers drive less than 200 miles a day. Porsche studies also show that about 80 percent of the distance traveled per week is less than 450 kilometers.

Driving dynamics are often compared to a large car battery. However, the simulation of the circuit times on the Nürburgring-Nordschleife with a length of 20.832 kilometers comes with a completely different result: the inventory references were the standard Porsche Taycan Turbo S, which weighs a total of 2,419 kilograms and a battery of 85.1 kWh. In this configuration, the electric sedan completes the Nordschleife thigh in 7: 39.5 minutes.

If the battery capacity is reduced to 70 kWh, the total weight is reduced to 2,310 kg, but due to the low battery performance, the Taycan completes the seventh round of ten seconds slowly. Because of the low weight, the acceleration time from 0 to 100 km / h is reduced by 0.02 seconds to 2.90 seconds. However, Taycan needs about eight tenths of a second longer to reach 200 miles per hour in 9.51 seconds. Thus weight loss does not compensate for reduced battery performance. 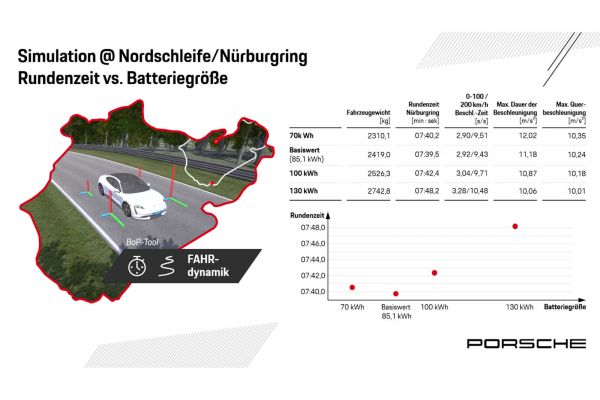 Results: Low CO2 emissions during production speak for small batteries, and operating dynamics for medium-sized batteries. Large batteries are often compared to long distances and thus short-term travel. But thanks to 800 volt technology and high-performance direct current, the Porsche Taycan can save 100 kilometers of energy in just five minutes, so fast charging is essential for Porsche.

Although some car manufacturers rely on larger batteries for their electric vehicles, Porsche goes its own way and shines a battery size of around 100 kWh with a range of about 500 km as the best balance between range, performance and sustainability. Future developments should further improve operational dynamics and further reduce loading times. Significant improvements can be expected in reducing CO2 emissions.

The second generation of electric vehicles, which will be launched in 2023 by the new, fully powered Porsche Macan, will emit carbon dioxide by 26 percent in its life cycle. A large part of recycling in battery production also reduces the need for raw materials. In addition, new cellular technologies will reduce energy consumption and higher charging capacity will further improve efficiency. 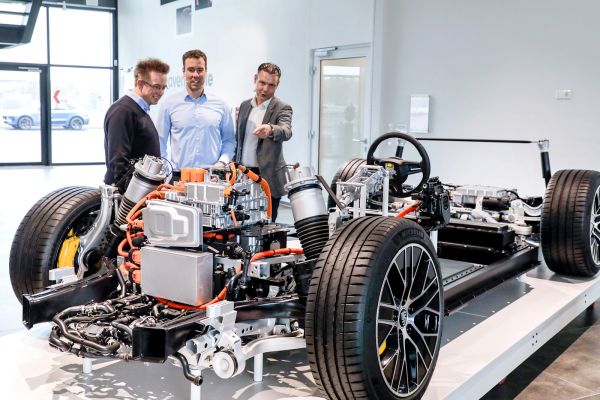 Is the battery faulty? No problem: battery repair at Porsche dealer

Many believe that high-voltage batteries in electric vehicles would have to be completely replaced if they failed, which in fact would not be sustainable. But more than that: Porsche-qualified stations can repair defective batteries, which saves resources. As early as 2024, 173 points for high-voltage support were planned for Porsche dealers worldwide, assisted by 57 high-voltage mobile specialists. For example, unusable cell modules can be identified and replaced or reduced by cable. However, if the cell is opened because of an accident, chemical substances escape so that no repairs can be made in this case.

Porsche offers an 8-year warranty or 160,000 miles on its batteries. If full replacement of the battery is inevitable, it can be as expensive as conventional engine replacement – about 30,000 euros for the Porsche Taycan Turbo S. Battery replacement, which is likely to cost around 6,000 euros if cellular modules are affected by replacement, has been proven to save more resources and cheaper – especially for the end customer after the bond expires, according to Peter Reck (Product. Aftersales Manager at Porsche) and Christian Brügger (Product Engineering Aftersales Electrics at Porsche).

In the future, older electric cars will have a rechargeable battery and replacement parts if needed. Box modules that work but are no longer suitable for automotive use can be installed in stand-alone energy storage devices. 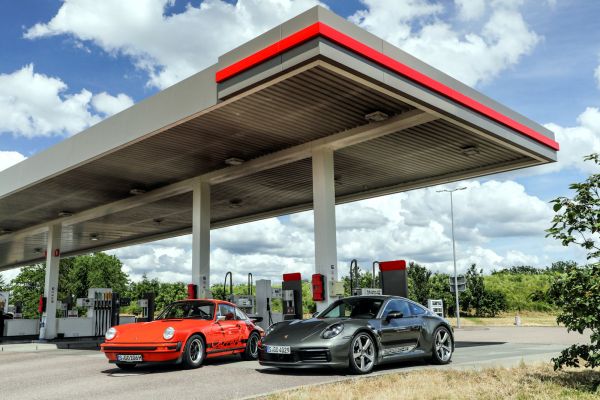 Porsche is aware that there will be a large number of vehicles with internal combustion engines around the world in the near future. But drivers for the Porsche 911, classic, other sports car and of course also regular cars with gasoline engines should be allowed to continue driving in the future. And this can be done in an environmentally friendly way if alternative energy is to replace the fossil fuels used to produce liquid fuels, as is the case with e-fuels. To this end, Porsche and several partners such as Siemens are building a large factory in Chile for the production of near-CO2-neutral electronic fuel, which will start operating in the pilot phase in 2022.

Basically, electronic energy requires only two raw materials (H2O) and carbon dioxide (CO2) for their production. To obtain hydrogen by electrolysis, a direct current is passed through water, which decomposes and collects hydrogen at a negative pole (cathode). The system draws carbon dioxide, another important barrier to the construction of electronic fuel, directly from the air. E-methanol (CH3OH) is produced from H2 (hydrogen) and CO2 (carbon dioxide) through the synthesis of methanol, and from this, in turn, through the so-called MtG synthesis, synthetic gasoline.

In a further step, the system enhances the CO2-neutral fuel by mixing it to compensate for the current level of fuel DIN EN 228 and can be used directly on any gasoline-powered vehicle or mixed with fossil fuels. With minor modifications, the factory in Chile can also produce electronic kerosene for aircraft from e-methanol. 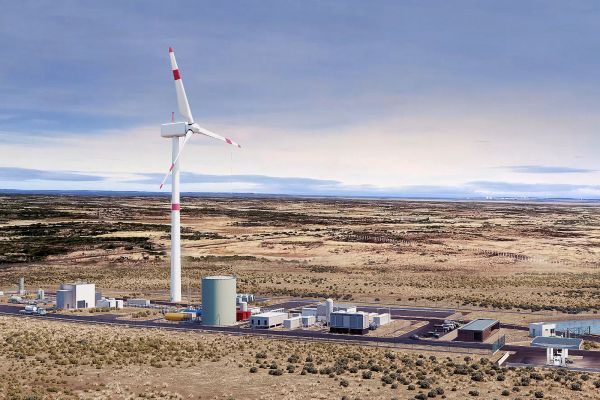 The reason for building an electronic oil factory in Chile

The processes of obtaining electronic energy require a lot of energy. But in Chile of South America, in the province of Magallanes to be precise, there are frequent strong winds. At the site of electronic energy production in Chile, the wind turbine operates at an average of 270 days a year. In Germany, on the other hand, there are only about 80 days a year. In addition, the low cost of just 15 euros per hour of megawatts for renewable energy in Chile makes electronic fuel more competitive.

By 2022, a factory in Chile will produce approximately 130,000 liters of electronic fuel during the pilot phase using a wind turbine. Porsche wants to buy this whole lot and first use it in the “Porsche Mobil 1 Supercup 2022” race series and in the “Porsche Experience Centers”. By 2024, 55 million liters of electronic fuel will be released annually by 550 million liters by 2026; approximately 700 wind turbines are required for this. Synthetic oils reach Europe and the sea. In the foreseeable future, ships will use e-methanol instead of heavy fuels to keep CO2 emissions down here as well.

Porsche reaffirms its commitment to synthetic energy and millionaire investment

A solution to keep petrol cars after 2035?

Volvo invests in the manufacture of its batteries

an oil factory was recently built to be ready

Mercedes, in the most prestigious strategy predicted Maybach SL – Experiments and News