Following a last-minute leak, the Porsche brand’s latest gem has finally made its public premiere. It is the second of four Heritage Design series items to be introduced as part of the plan. The new Porsche 911 Sport Classic aims to evoke an automotive classic while also resurrecting the aesthetics of the 1960s and early 1970s.

Production will be restricted to a small number of cars, and the external design is reminiscent of the original Porsche 911 (1964–1973). Also, it succeeds the preceding 911 Sport Classic, which was built on the 997 platform. Let’s go specifically and go through all of the major features.

It is a model that is instantly identifiable. The broad bodywork, which is normally reserved for the 911 Turbo, contrasts with the fixed rear spoiler in the form of the iconic Carrera RS 2.7 “ducktail,” and the double-vaulted top adds to the new Porsche model’s unique character. The body hue is a nod to the Fashion Gray paint used on early Porsche 356s. 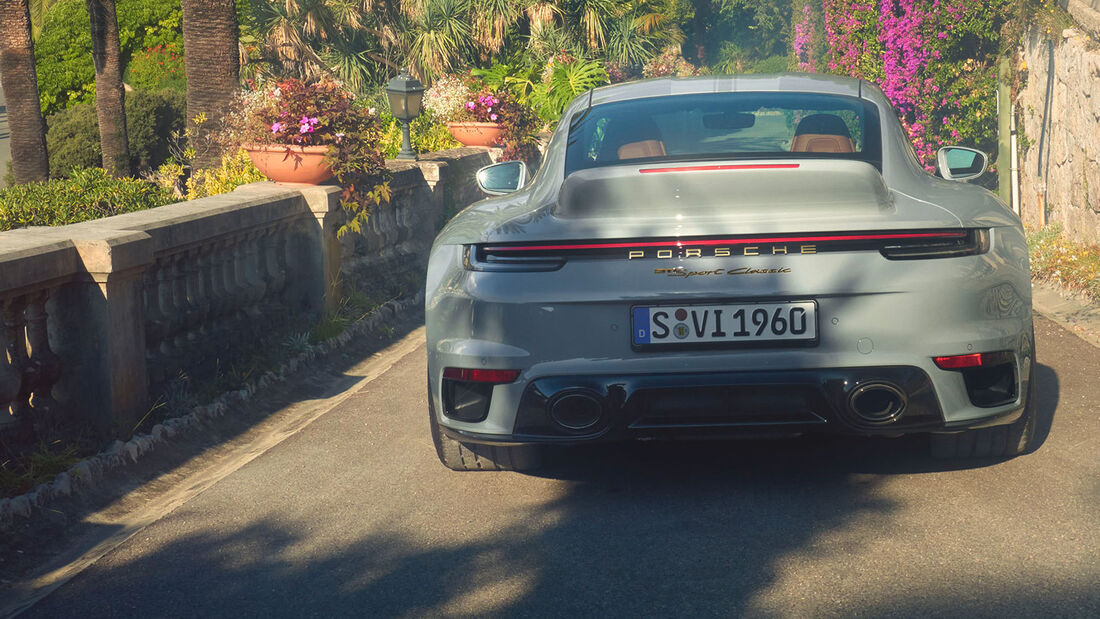 In addition to Sport Gray metallic, the Porsche 911 Sport Classic is available in Solid Black, Agate Gray metallic, Gentian Blue metallic, and a custom color through the Paint to Sample option. To the body’s tone, we must add the Gray Sport double stripes painted on the hood, roof, and rear spoiler.

Leaving aside the outside, entering the building immerses us in a rich, pleasant, and warm atmosphere. The unusual Pepita design appears on the door panels and seats’ fabric. A strong contrast is created by the two-tone semi-aniline leather upholstery in Classic Black/Cognac.

There is additional news in the mechanical department. The Porsche 911 Sport Classic’s “heart” is a 3.7-liter six-cylinder twin-turbo boxer petrol engine producing 550 horsepower. It is coupled to a seven-speed manual transmission and drives the rear axle. This is the most capable manual 911 on the market today.

The manual transmission has a ‘heel-toe’ mechanism that adjusts for the difference in engine rpm while downshifting by delivering a short rev-rise before entering the lowest gear. The engine is heard via a typical sports exhaust system that has been modified for a really distinctive sound experience.

Another important factor in modifying the Porsche 911 Sport Classic is the suspension. It utilizes the same platform as the 911 Turbo and 911 GTS versions. Porsche Active Suspension Management (PASM) is included as standard equipment, along with adaptive dampers. Additionally, the running gear reduces the riding height by ten millimeters.

As with its 997 series predecessor, the 911 Sport Classic is defined by its fixed ducktail at the back, which was also visible on its forefather. In comparison to modern 911s, the Sport Classic has a double-dome roof with small indentations that extend into the hood.

Otherwise, the large cheeks and aprons of the turbo variants demonstrate the 911 design. Rims like foxes spin in the wheel arches on the exhibit. Porsche now sells the 911 Sport Classic solely in “Sport Gray Metallic,” but starting in October 2022, the 911 Sport Classic will also be available in black, blue metallic, and another shade of gray. Double stripes painted in lighter sports gray on the front hood, roof, and rear spoiler emphasize the sports car’s appearance. Porsche also allows for custom colors.

The Sport Classic must and should also be distinguished on the interior from its series equivalent. Porsche provides the iconic Pepita cloth pattern for the inside of the doors and middle areas of the seats to accomplish this. Additionally, clients may pick between a black or cognac two-tone leather inside. Sport Classic emblems with the serial number, distinctive door sill panels, and digital cockpit displays are also included.

Also, the drive does not have to be concealed inside the collector’s 911. Due to the fact that the six-cylinder Biturbo boxer engine produces 550 horsepower from its 3.7-liter displacement – combined with the seven-speed manual gearbox – the 911 Sport Classic is the most powerful manual 911 in the current Porsche lineup. 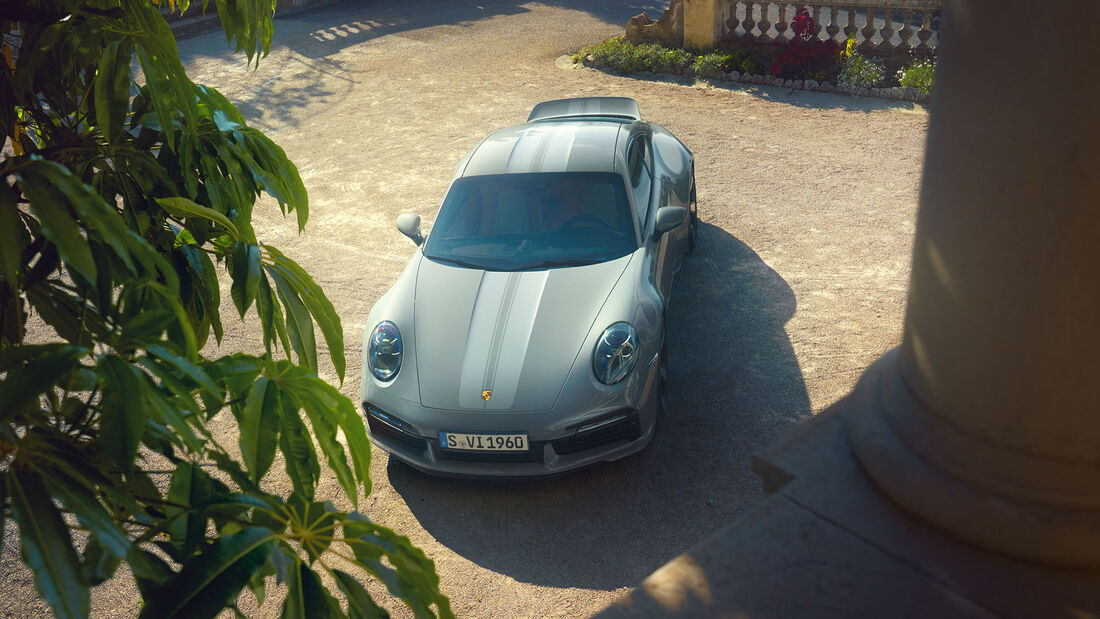 Porsche Active Suspension Management (PASM), whose dampers adjust in response to dynamic changes, is also included to ensure that the performance is appropriate for the road. PASM comes fitted with sports suspension and a 10-millimeter lowering. When shifting down, the transmission’s double-declutching mechanism (auto-blip) compensates for the speed variations between the gears. Additionally, a sporty sound is provided by a sports exhaust system tailored specifically for the vehicle.

The Porsche 911 Sport Classic will be available in July 2022 and is currently priced at 272,714 euros on the Porsche pricing list. In comparison to the previous model, the new one takes a drink from the price bottle: the 997 Sport Classic retailed for 201,682 euros at the time. After all, Porsche Design has created a special chronograph for purchasers that closely resembles the collector’s item.

From a delicate little ballerina to a fairly hefty bourgeois, the Porsche 911 has grown through the years. The 911 Sport Classic aims to rekindle nostalgic fond recollections.

To be sure, the naysayers will proclaim that Porsche has once again discovered a method to earn a lot of money with a limited series. Because, indeed, this Porsche 911 Sport Classic is a limited edition of 1,250 units, signed by Porsche Exclusive Manufacture. This 911 with a vintage style costs an arm and a leg: €280,603.00 plus VAT!

That is more than double the cost of a standard 911 Carrera. It exceeds the price of a Porsche 911 GT3 (€178,595 including VAT, NDLA). In summary, Porsche intends to profit from this 911 Sport Classic.

What makes her unique?

These reproductions are clearly inspired by the 1960s/70s aesthetic. Oh, don’t get your hopes up; this is not a ballerina (the 911 901 130hp weighed around 1100 kg), but it does possess an air of prudence and refinement. Already, it has the 911 mythical “ducktail” rear spoiler. Additionally, it has a double hump roof.

On the other hand, with a large 911 Turbo-style body and a big open front bumper, it is not discreet. It is shown in Gray Sport Classic but will also be available in black, quartz gray (darker gray), and gentian blue. Two white stripes (painted) run across it, and the doors are emblazoned with a large number 60.

Porsche has adorned the inside with the Pepita pattern. An instantly recognizable “houndstooth” design that shines out in a cabin as contemporary as the latest 911s. The remainder is upholstered in semi-aniline two-tone black/Classic Cognac leather. The inside may be totally black as an optional extra. It is less glistening. 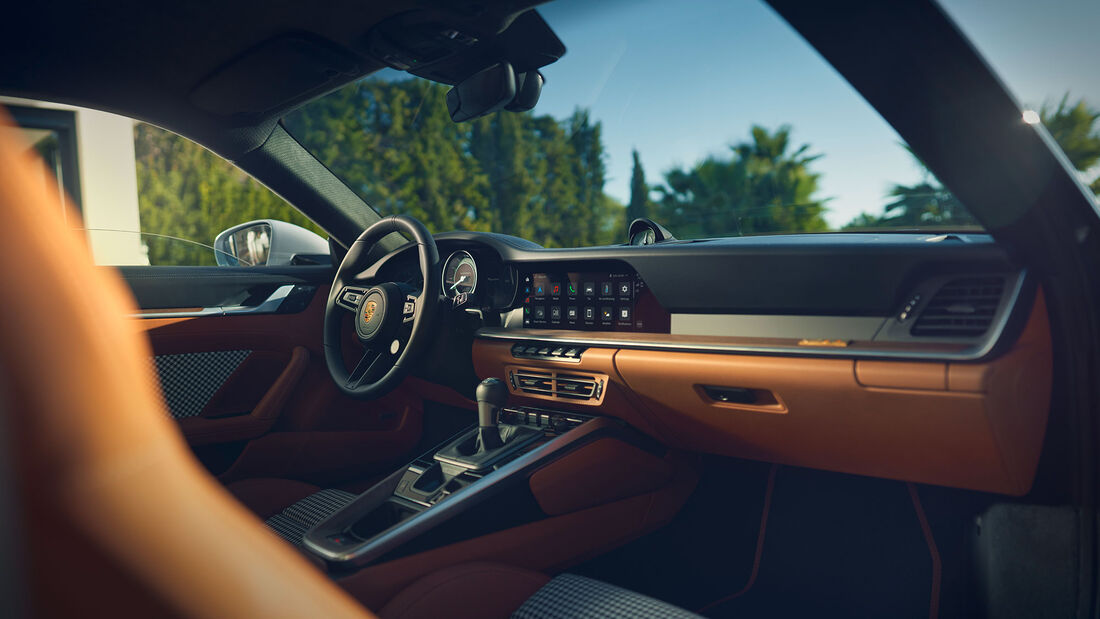 Porsche has equipped this 911 Sport Classic with a manual transmission to maintain this tribute to the past. This will satisfy the illustrious “purists” who despise the PDK. The 3.7-liter Biturbo flat six-cylinder engine produces 550 horsepower in this configuration. The manual transmission’s seven speeds transfer power only to the rear wheels. There will be commas made of rubber…or spinning!

Porsche promises a chassis inspired by the 911 Turbo and 911 GTS with tiny onions. It comes standard with PASM (Porsche Active Suspension Management) (it would be petty to provide it as an option, wouldn’t it?). Only Sport Classic rims are available. They absorb a little amount of the Fuchs spirit without adding anything more.

Due to the car’s limited production of 1,250 units and the fact that not everyone, even the wealthy, can invest €280k in an ‘Improved Beetle,’ Porsche intends to make a selection of interior items from the new 911 Sport Classic available as part of the Heritage Design Classic pack for almost all 911 models. Porsche is not insane.

Apart from the necessary liquid cooling system imposed by contemporary mechanics, this 911 is arguably the closest to the collectors’ favorite vintage and sports 911s. In spirit, at least, this 911 Sport Classic operates on an entirely another level in terms of technical specifications and performance.

Thus, Porsche unveils the second model in the “Heritage Design” story, which started in 2009 with a 997-based model and will conclude in 2020 with the Targa 4S Heritage Edition inspired by the 1950s and 1960s. This time, the time period is changed.

A Porsche 911 Sport Classic based on the Carrera RS 2.7

Porsche advances from one inspiration to the next for this second special edition, in this instance from the 356 to the 1972 Carrera RS 2.7, one of the most renowned Porsche 911s in history. The most astute will have spotted the pleasant small nods to the past, such as the iconic fixed “ducktail” rear wing, the double roof boss, and the rims with a design reminiscent of the legendary “Fuchs”: everything is there!

Regrettably, those who believed they could afford the “ducktail” as an option on a more traditional 911 were disappointed: Porsche has reaffirmed that this feature will stay restricted to the 911 Sport Classic.

And it’s not simply a matter of commercial preference: on this 911, it adds to the car’s aerodynamic balance, since it pairs with a front bumper with a distinct blade, highlighting and supporting it. Obviously, the configuration of this relatively unique 911 is unsuitable for a Carrera or GTS.

Inside, two-tone black/cognac leather upholstery complements the special “Sport Grey” metallic exterior color. Additionally, lucky clients will get a Porsche Design-designed to watch to complement their 911 Sport Classic. The strap is composed of the same leather as the chairs. 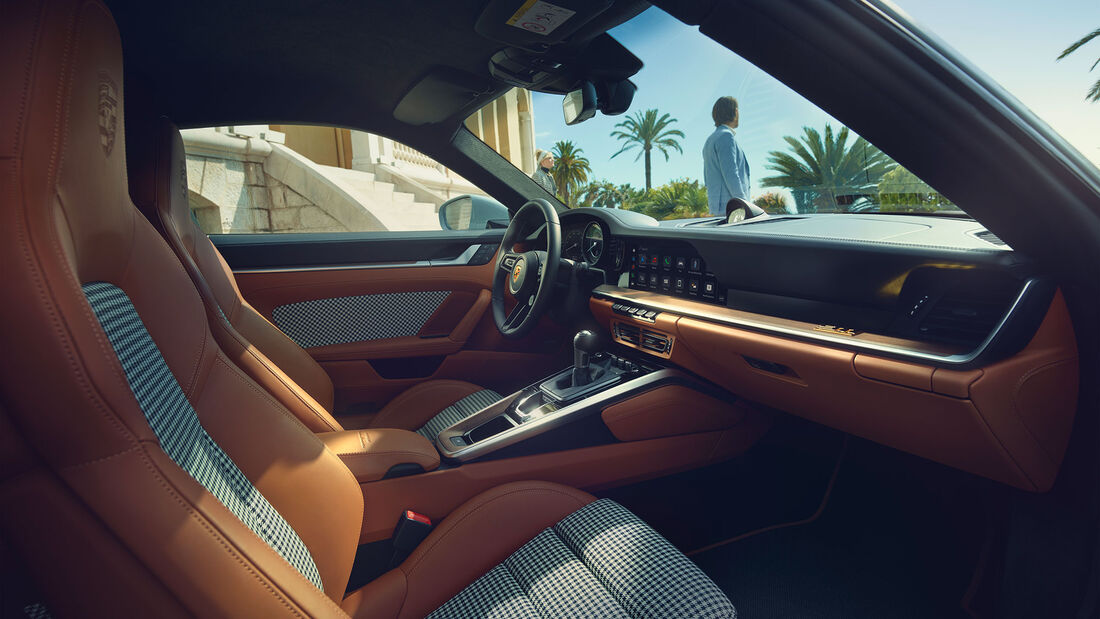 The 911 Sport Classic is a “false” turbocharged automobile!

Thus, the basis is a 911 Turbo (thus the broad hips), but with some very distinctive features: in place of the PDK gearbox (which has been standard on the Turbo since the 997 Phase 2), we discover a seven-speed manual transmission. reports. And to keep it from succumbing to the flat six’s strain, Porsche reduced its power but also, and most importantly, its torque: 550 horsepower and 600 Nm, compared to 580 hp and 750 Nm for the traditional Turbo.

The excitement does not end there, since, unlike a Turbo, this 911 Sport Classic has. a propulsion system! Thus, you have the ideal recipe for every “purist”: manual transmission, large engine, and rear-wheel drive.

According to rumors, the prototype Porsche 911 Sport Classic comes with hints of retro design

50 Years of Porsche Design for the Porsche 911: The Name Says It All