The more affordable version of the new KIA Sportage 2022 with a gasoline engine and an ECO badge enables KIA’s redesigned small SUV to stand out in a competitive category. Is it adequately equipped? How much do you charge? Is it beneficial? Learn the answers to these and other frequently asked questions.

The new KIA Sportage 2022 is already being marketed in Spain. KIA has activated the necessary gear to begin commercial production of the long-awaited fifth generation of its famous compact SUV. The Sportage, a key model for the South Korean manufacturer, has been completely redesigned. From design to mechanics to technical equipment, the premiere.

Under the idea of maximizing sales in the new Sportage’s first commercial phase, the business has developed a broad and diversified offer. Among the several available models, the entry-level Sportage with a gasoline engine and an ECO badge is without a doubt the most affordable. However, is it adequately equipped? Is the engine responsive? Let us go into depth and address these and several more concerns.

It’s essential to keep in mind that the new Sportage range is divided into four trim levels. When we enter the configurator, we are presented with the Concept, Drive, Tech, and GT-line finishes. We will get access to one of the endings depending on the mechanisms selected.

From the Drive finish, we may access the engine that directs our attention. A variant that stands out for its price-to-performance ratio.

In terms of the mechanicals, this variant of the new Sportage is powered by a 1.6-liter T-GDi gasoline engine with four cylinders in line that produces a maximum of 150 CV and 250 Nm of torque. A block mated to a six-speed manual transmission and front-wheel drive.

The engine’s major feature is that it is electrified by 48-volt mild-hybrid technology (MHEV), which enables the KIA SUV to carry the DGT’s ECO environmental certification with all of the associated mobility benefits. Motorization that enables the Sportage to accelerate from zero to 100 kilometers per hour in 10.3 seconds and attain a peak speed of 189 kilometers per hour.

The proportions are the primary distinction between the worldwide Sportage and the Europa version. While our SUV measures 4515 millimeters in length, the worldwide model measures 4501 millimeters. Each market has a single version. In other words, Europe receives just the short wheelbase, while the rest of the globe gets only the long.

The Sportage builds on Kia’s new design language, which began with the EV6 electric crossover. It is titled “Opposites United” and is designed to imply a link between natural and technological components. The style is unmistakably striking and lends the new Sportage an edgier, more assertive presence.

The front is defined by the imposing radiator grille, the top portion of which retains the brand’s signature tiger-nose. No less remarkable are the lights with boomerang-shaped daytime running lights.

Headlights using matrix LED technology are available as an option. Kiathe GT-Line tweaked the styling somewhat for the European variant. Rather than chrome clasps, the bottom portion of the apron is embellished with ornamental elements in the vehicle’s color. 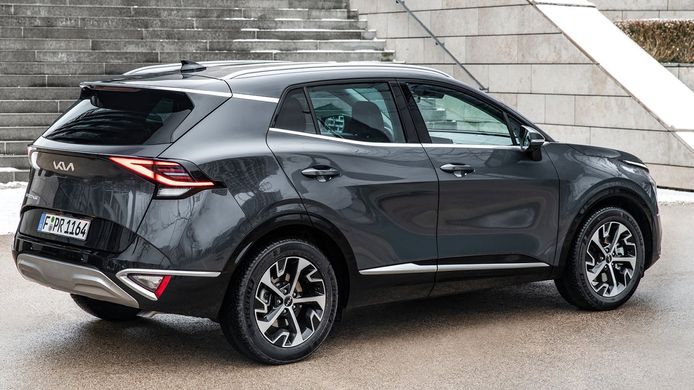 The bottom border of the window rising from the B-pillar is especially prominent from the side. It optically lengthens the Sportage by tapering towards the top. Kia has modified the D-pillar on the Europe model. Rather than a huge chrome feature, it is painted in the body color, interrupting the ornamental window strip that continues only on the roof edge spoiler. Speaking of the roof, the GT-Line now has a contrasting finish for the first time.

The back is almost as stunning as the front: the rear lights are practically identical to the front and are likewise styled as open brackets to the outside. The continuous strip is only decorative and does not illuminate.

There is a suggestion of underrun protection on the rear apron, but no false exhausts. As with the Hyundai Tucson, the wipers have been relocated under the rear spoiler. There are between 591 and about 1780 liters of baggage space behind the tailgate. The baggage space is somewhat smaller in the hybrid variants.

The inside is where the argument for updating is most visible. The pre-series vehicle’s material quality and processing look to be highly strong, and a Harman Kardon sound system is optional. The cockpit seems far more contemporary than its predecessor, owing largely to the curved glass panel familiar from the EV6.

Nice: Kia did not cheat here by installing two angled displays, but instead chose a single curved glass without an intermediary junction. However, underneath it are two independent displays, each measuring 12.3 inches diagonally. Two circular instruments are shown in the digital cockpit, the design of which varies depending on the driving mode.

In the GT line, the test vehicle was fitted with electronic damper control. Even in regular mode, the SUV’s developers have adjusted it so precisely that practically no rolling motions are detectable in tight turns. Despite this, a decent amount of residual comfort has been retained, and the steering is delicately calibrated and adjustable with excellent feedback. Our test vehicle is equipped with all-wheel drive, a 1.6-liter petrol engine producing 180 horsepower, and a seven-speed dual-clutch gearbox.

Even though the 1.6 recognizes its loss of cubic capacity with a loud scream while dashing down a highway ramp, it swims well with this performance, and the gearbox works flawlessly with the 48-volt onboard network. When the traffic signal changes from engine to 30 km/h, nothing rumbles because they have so effectively integrated everything. When you let off of the gas pedal, the Kia even coasts, then the engine shuts down – and restarts instantly when you step on the pedal.

Andreas May’s conclusion: Kia sets an example with the small SUV! Modern layout, top-of-the-line cockpit with the finest connection, and a combustion engine powered by a 48-volt electrical system, which will be available in the future as a plug-in hybrid. This Sportage is not simply a rival to the VW Tiguan; BMW, Audi, and Mercedes are all welcome to have a look!

In terms of infotainment, Kia incorporates the current iteration of their UVO system, which has blue and purple symbols evocative of 1980s neon advertising. The system is simple to run and straightforward to use; it responds instantly to touch instructions; updates are performed “over the air.” A unique feature is the control panel below, which Kia refers to as “Multi-Mode Touch.” 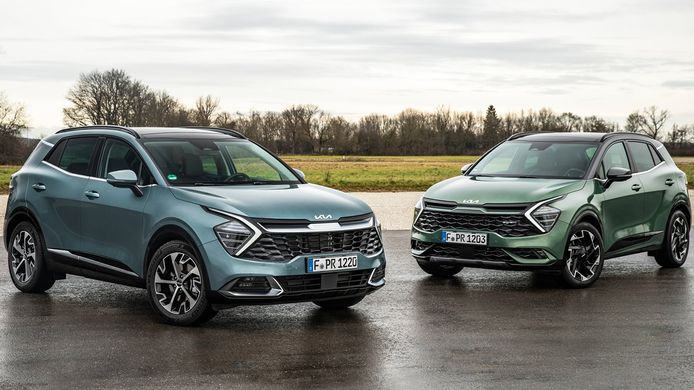 It is essentially a control panel for the air conditioning; the temperature is still regulated by traditional rotary knobs. The temperature control panels, on the other hand, vanish when a finger is pressed, and navigation and radio shortcuts for the infotainment screen display instead. This works fairly nicely the first time you try it, despite the fact that it seems to be quite redundant. Gear selection is now accomplished using a rotary control next to which the last remaining buttons are located.

The 2017 Kia Sportage’s back seat is rather roomy, with adequate room for people. Only the headroom is somewhat constrained, however, this is mostly owing to the optional glass roof. The coat hooks in the front head restraints are convenient since they allow you to hang coat hangers without obstructing your view out the side windows.

Kia has appropriately enhanced the driving and safety aids. Additionally, when the Sportage blinks, the region in the blind spot is displayed as a picture in the digital cockpit. There includes navigation-based cruise control, a 360-degree camera for the outside display, and a remote control capability for directing the car into parking places from the outside.

Highway Driving Assist is also offered, which combines cruise control and lane departure warning. Additionally, the emergency brake assistance now operates at intersections and when reversing. Additionally, the automobile automatically stops when it senses an obstruction when changing lanes.

As is customary, the fifth-generation Sportage is built on the Hyundai Tucson’s basis. Additionally, he takes up the driving duties from him. This translates to two 115- and 136-horsepower diesel engines and two 150- and 180-horsepower gasoline engines for the European variant.

Each of the more powerful models has mild-hybrid technology, with the petrol engine serving as the weaker engine as an alternative. Additionally, a complete hybrid with 230 horsepower is available. If you wish to charge the vehicle yourself, the 265-horsepower plug-in hybrid is available.

Both diesel engines and the entry-level petrol engine are also available with a manual gearbox, while the other engines come standard with either a double-clutch or an automated torque converter. Most engines are available with all-wheel drive and unique off-road driving modes.

A pure-electric model is out of the question since it would compete with the EV6. It should be noted that it is not yet apparent if all drivetrain configurations available in Europe will be offered in Germany. (Information critical to the environmental bonus!)

The European Sportage is scheduled to hit the market in early 2022. The beginning price has not yet been announced by Kia. Taking into consideration the customary price hikes associated with model changes, the fifth-generation Sportage should start at roughly 25,000 euros – including the seven-year warranty or over 150,000 kilometers that Kia is renowned for.