There are just three variations available in the new BMW 2 Series Active Tourer lineup, which the Bavarians want to expand with additional models. In the next months, the new version of the Premium minivan will launch significant new features.

The new BMW 2 Series Active Tourer is poised to make its market debut. Since last autumn, it has had pricing and can be set and bought, despite the fact that manufacturing began in November at the German facility in Leipzig with just three variants available.

Despite its tiny size, the German brand’s approach has remained consistent over the years, gradually growing to include more alternatives that are more tailored to consumer demands. The new Series 2 Active Tourer has all the characteristics necessary to reclaim its position as a category leader, with sportier proportions and a design that complements the new, more contemporary range of Munich automobiles. Utilizing the start of the new year 2022, the new model will expand its presence with the addition of new equipment and engines. 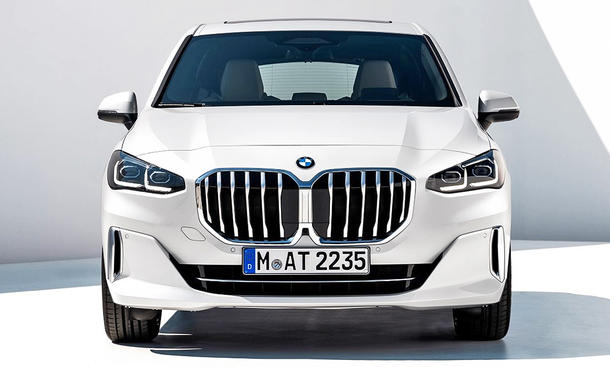 The most intriguing innovations will begin arriving in March, starting with the all-wheel-drive xDrive and ending with the new 223i xDrive Active Tourer, the advantages of which are detailed below. This variant has a 2.0-liter four-cylinder gasoline engine coupled with 48-volt MHEV technology, producing a maximum power output of 218 horsepower as a consequence of the thermal engine’s 204 hp and the 19 additional hp provided by the electric motor. Along with the eight-speed automatic gearbox, the four-wheel drive does not obstruct optimal efficiency.

Additionally, the minivan enhances personalization options by introducing a new metallic paint to the color pallet, “Piedmont Red.” The innovations do not stop there; they extend to optional equipment with new driving helpers, with the “Driving Assistant Plus” emphasizing the new features.

The technology performs tiny steering wheel adjustments up to 180 km/h to maintain the 2 Series Active Tourer in the middle of the lane under all traffic circumstances. Additionally, the assistant may feature, for an additional fee, active cruise control with a “Stop & Go” function that automatically limits the vehicle’s peak speed to the posted limit, while also highlighting overtaking restrictions on the digital instrument panel.

You didn’t think of the BMW 2 Series Active Tourer when you thought of sporty, dynamic, and available with over 300 hp? To be quite candid, neither do we. However, with the second generation, Munich is the most practical of all cities! BMW wants to bring the product range’s black sheep closer to the brand’s core for die-hard fans and is investing heavily in the family van.

Orders for the new 2 Series Active Tourer will open on February 26, 2022. This, however, is true only for conventionally propelled vehicles. You must wait till summer 2022 to drive partly electrically. Then and only then will plug-in hybrid vehicles be accessible.

BMW’s new family van is already available at a discount on the Internet. The Munich automobile is already available for less than the stated price on carwow.de (a collaboration partner of AUTO BILD). A glance at internet specials, on the other hand, cannot damage the BMW 2 Series Active Tourer.

The new Active Tourer is significantly different from its predecessor in terms of appearance. The substantially enlarged kidney is now octagonal in shape and contains components of the driver assistance sensors as well. 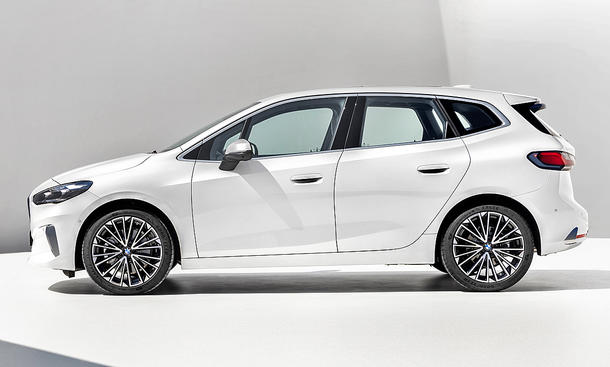 Standard LED headlights, which may also be chosen with matrix technology – no laser light is used – provide proper perspective. The somewhat less steep A-pillar is visible from the side, which will help the 2 series seem more streamlined in the future. The van takes the flush-mounted door handles from the electric i4.

The BMW is equipped with 16-inch alloy wheels as standard; 19-inch wheels are available for an additional fee. It will not have a visible tailpipe in any model variant, and the Munich-based business will also forego optical panels. If you choose matrix LEDs up front, you will always have blacked-out taillights, although LED technology is also common on basic lights.

Inside, you encounter a universe that is radically different from its predecessor. The 2 Series is the first non-electric vehicle to sport the BMW iX and i4’s new cockpit layout. The innovative curved display cockpit integrates a huge instrument cluster with a center console touchscreen.

The package includes the newest version of iDrive and Windows 8. In all model types, the steering wheel is built as a sporty version, with controls taken from the iX.

The overall sensation of space is open, but in the front row, it is engulfing, which is characteristic of BMW – excellent. The gear selection and driving modes are housed in the free-floating center console, whereas the 2 Series Active Tourer is devoid of an iDrive controller.

The inside undergoes significant changes: the new curved display replaces the iDrive controller.

The rear seat bench’s adjustable backrest adds up to 90 liters of storage capacity.

There is plenty of room in the rear; the rear seat backrest can be adjusted in many configurations as standard, providing extra loading capacity (+90 liters) in daily use. Additionally, the bench may be relocated. Trunk capacities ranging from 406 to 1455 liters are attainable depending on the model type and powertrain. Regrettable detail: Despite the increased standard equipment over the predecessor, seat heating remains an option.

The second row of the two-seat Active Tourer has an open feel to it: knees and head have more than enough room. 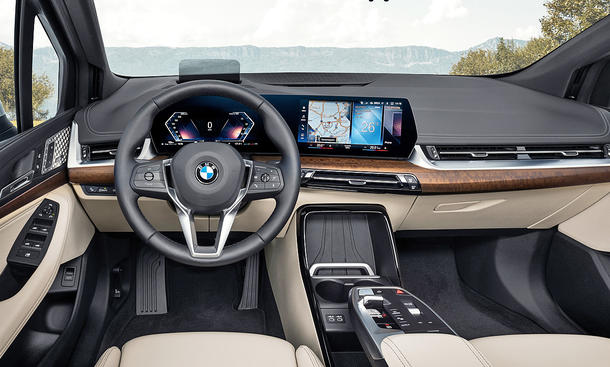 BMW equipped the new 2 Series Active Tourer with the newest version of iDrive and Operating System 8. This implies that the operating system, which was initially presented in the BMW iX, is now being utilized in a combustion engine car.

Unlike in the middle and higher classes, however, BMW’s family van does not have the popular iDrive controller. The system is controlled at this location using touch or voice input. The air conditioning controls have also been relocated to the 10.7-inch central display as part of the new infotainment system.

Different theme worlds may be accessed using the new “MyModes” feature. The modes essentially replace the prior selection of traditional driving modes, but they also regulate the vehicle’s ambiance in addition to its attributes.

BMW Maps is always included with the vehicle and utilizes cloud-based route guiding. 5G connection enables data interchange between BMW servers and other BMWs on the road to be lightning quick. The Active Tourer is ready for the next decade with the assistance of new mobile phone technology.

Plug-in hybrids offer an all-electric range of up to 80 kilometers.

BMW’s drivetrains include traditional combustion engines and two plug-in hybrids. Additionally, the majority of petrol and diesel engines are mild hybrids, owing to 48-volt technology and an integrated starter generator in the gearbox.

The performance ranges from 136 hp in the 218i (three-cylinder) to 218 hp in the 223i (four-cylinder); the sole diesel option is the 150 hp 218d (four-cylinder). All 2-series Active Tourers come equipped with a new seven-speed double-clutch.

All-wheel-drive vehicles will be available later this year from Munich. The two plug-in hybrids will be ready in summer 2022 with a 14.9 kWh battery and a range of up to 80 kilometers on electricity alone.

They are always equipped with xDrive due to the electric motor on the back axle. The charging power has been raised from 3.4 to 7.4 kW, ensuring that the battery is fully charged in only 2.5 hours. The entry-level 225e has a system output of 245 horsepower, while the top-of-the-line 230e has 326 hp.

Toyota Avalon 2022, Has Been Debuted