New 2023 Lamborghini Huracan GT3 EVO2 is powered by a V10 engine and with a huge wing. Lamborghini fires the Huracán GT3’s next developmental cycle. Sant’Agata Bolognese’s new race vehicle has been extensively refined in several aspects, including aerodynamics and the V10 naturally aspirated engine. In 2023, the GT3 racing vehicle will make its premiere at Daytona.

The Evo2 is easily distinguishable from Lamborghini’s first evolutionary stage, which debuted in 2019 and was based on the EVO road version. On the top of the new race vehicle is an air scoop with a spherical snorkel integrated. Side air intakes have been eliminated. According to Lamborghini, the new method improves the efficiency of the intake system. The temperature of the intake air is lowered by six degrees.

The snorkel directs the airflow to the V10 engine. This results in an even more responsive natural aspirated engine that is already wide awake. “Because the power is managed via the BoP, the roof air plenum was designed largely to optimize airflow and driveability,” explains Leonardo Galante, technical director of Lamborghini’s race division.

A roof fin is linked to the rear air scoop. This rear fin improves the vehicle’s balance and stability in curves and straights – and is part of a comprehensive aerodynamic package being developed by Lamborghini engineers for the Huracán GT3 Evo2. Normally, you would not see a fin-like this in GT3, but rather on prototypes. 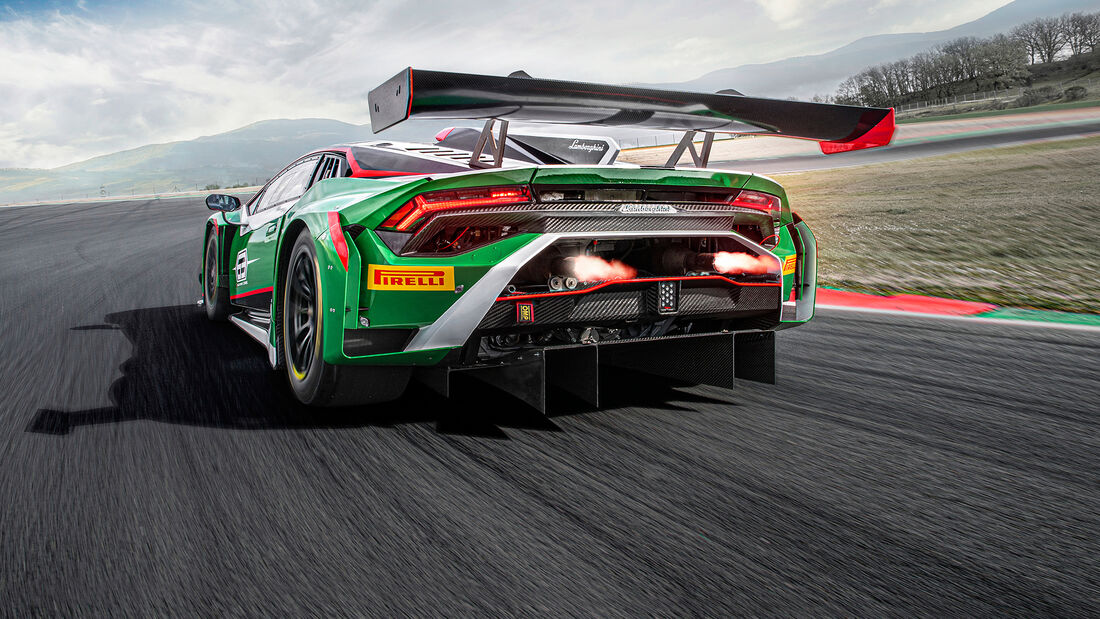 Changing the basic model provided the technicians with the necessary flexibility. The new racing vehicle is based on the Huracán STO road sports car, which has a V10 engine producing 640 horsepower and a rear-wheel-drive configuration. Due to the Balance of Performance, the racing model has less than 600 horsepower (BoP).

The development took over the Squadra Corse racing section. For the time being, let’s focus on the engine before moving on to more aerodynamic improvements. Lamborghini presents ten newly developed electronically operated throttle valves that improve the V10’s efficiency when used in conjunction with titanium valves. The complete system is secured to the engine through four bolts. This should simplify maintenance work.

The body is constructed entirely of carbon fiber. The specs are replete with the term “efficiency.” Trimming was then performed on the new front splitter, diffuser, and underbody. Also, the contact pressure should be increased. This is accomplished via the employment of a carbon fiber underbody with a Zylon coating (which protects against damage) and a newly built diffuser. Two goosenecks secure the Huracán GT3 Evo2’s strong rear wing. The additional supports should enable more accurate wing adjustment.

Each new racing vehicle should be safer than the previous one. Lamborghini has previously conducted testing on the Essenza SCV12 with the roll bar with two extra columns and the new carbon-kevlar honeycomb side panels. They provide additional protection in the case of a side hit. Lamborghini uses a ring of screws to secure the plexiglass side windows to the door liner. This results in an increase in stiffness.

Sprint and long-distance races are appropriate applications. That requires strong brakes. In coordination with the electronics department, new brake calipers and pads were fitted. The ABS and traction control systems have been tweaked to allow even novice drivers to more easily handle their GT3 racing vehicle when there is limited traction.

Pirelli P-Zero tires measuring 325/680 18 in the front and 325/705 18 in the back are fitted to the Huracán GT3 Evo2. The Lambo technicians concluded: “The Evo2 represents a significant jump, even if it is not immediately apparent.”

Lamborghini has enhanced its existing GT3 Huracan and unveiled an evolutionary stage for usage in racing beginning in the 2023 season. The Italian sports vehicle will make its track debut in the 24 Hours of Daytona in January 2023, with teams such as GRT and T3 Motorsport.

The Lamborghini Huracan GT3 EVO2 is based on the road-going Huracan STO and is the newest development of the 2019 racing vehicle. Customers may anticipate a reworked aerodynamic package and an entirely new engine intake system. The EVO2 package is available as a kit for the GT3 Huracan’s current version. Deliveries are anticipated to begin in the second part of 2022.

While Lamborghini is rejuvenating its top customer athlete, Italy’s Ferrari will introduce a whole new model based on the Ferrari 296 in 2023. BMW debuted its new BMW M4 GT3 this year, while Audi debuted a second Evo version of the Audi R8 LMS GT3. GT3 racing continues to grow in popularity and could experience an improvement with the planned debut of GT3 cars at the 24 Hours of Le Mans in 2024, rather than GTE cars. 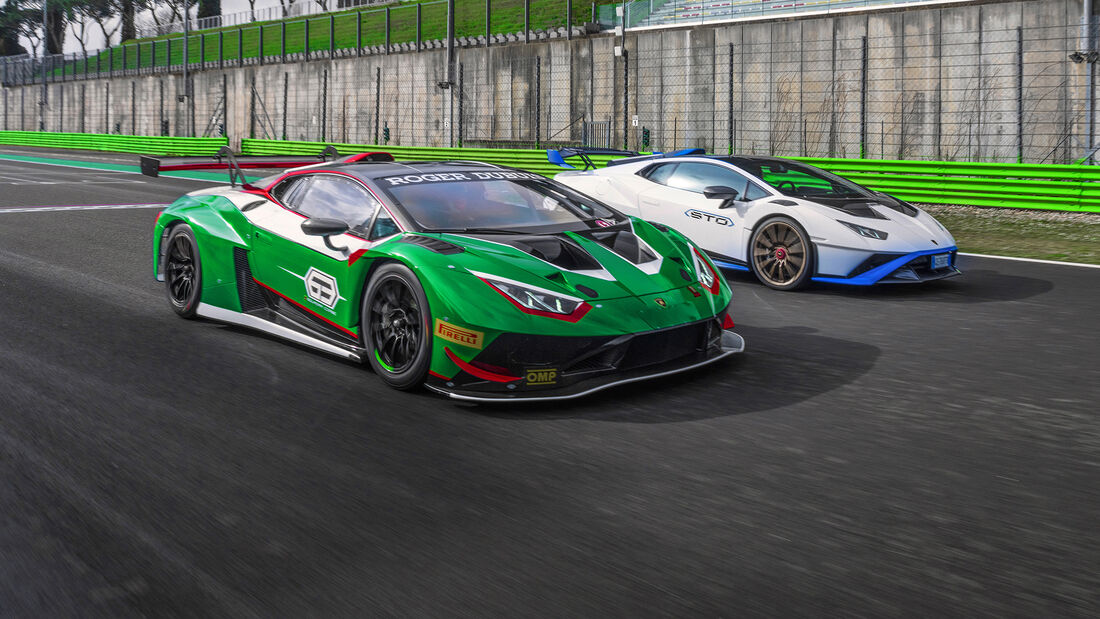 Giorgio Sanna, Director of Lamborghini Motorsport, explains: “The new Huracan GT3 EVO2 is not a rehash of the present model. It is a new initiative that serves as the foundation for technology transfer between Lamborghini’s Motorsport division and the rest of the firm.” Lamborghini is developing the Evo2 package in order to achieve the objective established in 2015 of selling 500 GT3 Huracans to clients globally. The exact number has not been revealed so far.

Electronically driven throttle valves will be used for the first time under the hood of the Huracan EVO2 in 2023 to improve the V10 engine’s efficiency. The hexagonal air scoop and rear fin are taken from the Huracan STO and are meant to contribute to a more efficient intake system and a more balanced car. The air scoop is attached to a snorkel, which serves as a replacement for the side air intakes. The Lamborghini Squadra Corse built the whole system, which is placed on the engine using just four screws.

The new splitters, diffuser, and Zylon-reinforced underbody are all meant to increase aerodynamic efficiency and downforce over the existing GT3 EVO. Also, the new kit features the rear wing, which is placed on aluminum alloy supports inspired by the STO. In comparison to the EVO model, the redesigned supports enable more accurate wing adjustment.

Also, the braking system has been improved with new calipers and pads developed specifically for endurance and sprint races by Squadra Corse. They were created in conjunction with the required traction control and anti-lock braking systems in order to make the automobile simpler to manage when the grip level is low, even for well-heeled amateur drivers.

In fact, there’s a very valid reason why the hexagonal roof scoop may appear familiar: it was copied from the STO. It’s connected to a snorkel that’s been installed in lieu of the top side air intakes, and the rear fin is derived from the most powerful Huracan ever built for the open road. In line with expectations, the EVO2 with its improved aerodynamics conforms entirely to the most recent FIA technical rules.

The engineers have equipped the naturally aspirated engine with ten electronically operated throttle bodies in order to increase the efficiency of the V10, which is equipped with titanium valves to do so. The whole system is secured to the engine with just four screws, a technology that was first utilized on the extreme Essenza SCV12 race car. It makes it far simpler to get access to that region and do maintenance and repair work within.

Everything from the ceiling to the floor is constructed of carbon fiber, which has been coated with Zylon fiber to increase its strength. It has been upgraded by Lamborghini’s racing division, which has included the addition of two rear pillars and honeycomb side panels composed of carbon fiber and Kevlar. For the Huracan GT3 EVO2, the plexiglass side windows are now secured to the door panel with a number of screws, allowing it to brag about its structural integrity. 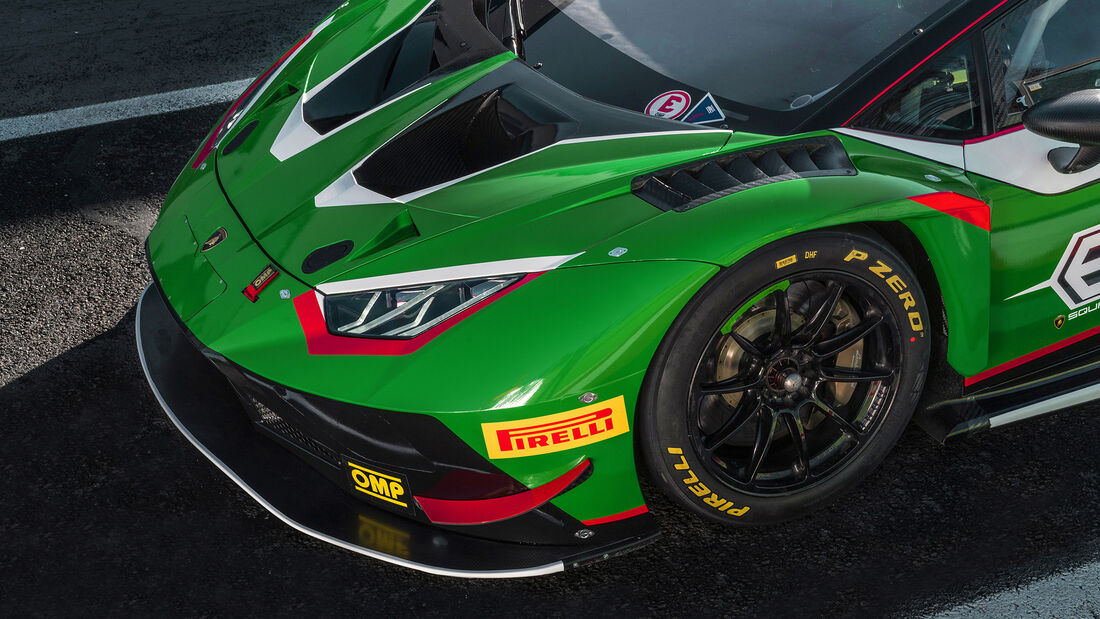 The wheels, on the other hand, are encased in Pirelli tires and are supported by updated brakes that have new calipers and pads that are more durable than before in both sprint and endurance races. A number of other systems, including the traction control and anti-lock braking systems, have been modified by Squadra Corse to make the car simpler to operate in low-grip situations.

Customer deliveries are expected to begin in the second half of this year, with the car making its racing debut at the Daytona 24 Hours in January 2023. The Huracan GT3 EVO2 is not the last Huracan modification, since the Steratto, a high-riding road vehicle, will be released in a few months to complement it. It will be the last edition of the ICE-only supercar, since any possible following models will be hybridized, much like the supercar’s predecessor.

It is the new roof scoop, which provides direct fuel to the car’s 5.2-liter, titanium-valved V10 engine and has enabled Lamborghini to cover up the air intakes at the trailing edge of the window apertures to a large extent. The new roof scoop is the most significant STO-inspired modification.

While the engine hardware for the Evo2-generation GT3 is substantially the same as that for the Huracán road car, separate throttle bodies are also included for increased responsiveness.

Outright power, on the other hand, will be down on the 631bhp totals of the Huracán Evo and STO showroom vehicles – roughly 580bhp is the maximum allowed by the rules. The power is sent to the rear wheels via the car’s six-speed sequential gearbox, which was provided by Hör.

The Evo2 is a racing vehicle developed and produced on-site in Sant’Agata by Lamborghini’s Squadra Corse racing company. It has a complete carbon fiber body with updated splitters, diffuser, and underbody, among other characteristics.

Downforce has been increased with the goal of improving lap times, though as with previous iterations of the Huracán GT3, stability and predictability remain top priorities, and Lamborghini intends to maintain the car’s reputation as one of the most forgiving machines on a GT3 grid that includes both professional and amateur drivers alike. The use of an upgraded multi-stage traction control system is beneficial in this regard.

It will be possible for teams presently running the Huracán Evo GT3 vehicle, which included significant upgrades over the original Huracán GT3 car in terms of ingress/egress and mechanical access into the drivetrain, to upgrade to Evo2 standard. The Huracán Evo chassis serves as the foundation for both vehicles.

In addition to several series, the Evo2 will participate in the British GT Championship, where it will face off against cars like the Audi R8 LMS GT3 Evo II, Bentley Continental GT3, Mercedes-AMG GT3, Porsche 911 GT3 R, and the new BMW M4 GT3, among others.

Why To Buy the 2021 Lamborghini Huracan STO