Like the arrival of a new car brand Once an event, this is not really the case anymore today. With Chinese manufacturers now having the maturity needed to face the European market, new labels are flourishing! We recently saw the return of MG, and the birth of Aiways and Seres. The turn has come today for Lynk & Co. Awaiting arrival, probably 2022, for Ora, XPeng and Nio.

The name of Lynk & Co is now completely unknown in the Old Continent and the many eyes of passers-by who squinted to better read the letters written on the back of the SUV 01 during our test testify to this. But behind this new brand, there is a big name in the automotive industry, as it is a joint venture between Volvo and its Chinese owner Geely.. Lynk & Co is headquartered in Gothenburg, Sweden, but manufacturing is handled in Ningbo, China, where Geely has several factories and a research and development center. “We had plans to produce the 01 in Ghent in Belgium”, believes Alain Visser, CEO of Lynk & Co, “But the chain is already struggling to meet the success of the Volvo XC40, with the recent addition of the C40 100%. electricity does not give us a chance anymore. “

Lynk & Co, the “Netflix of Cars” for its CEO Alain Visser

At first glance, the Lynk & Co 01 is just one compact hybrid SUV among many others. It is through its marketing method that this new model intends to differentiate itself. “In China, Lynk & Co is a brand like any other, which sells cars in a traditional way”, resumes Alain Visser. “There, buying a car is cool, for many customers it is their first car and our studies have shown that they would be disgusted to rent or share their cars, while in Europe, on the other hand, we want to present ourselves as Cars. Nextflix”. The brand focuses on a an all-inclusive rental formula (maintenance and insurance, regardless of the driver’s profile), without commitment, for 500 € per month. And any user has the possibility, through the menu on the screen, to offer his car for delivery to other “members” who do not have a car but would like to use it for a few hours. They can find available cars through a smartphone app.

“We aimed to attract 9,000 members in Europe in the first year, we already have 30,000, including 4,000 in France!” Satisfied Alain Visser. “Our members are young, 35 years old on average, and a good part of them have never owned a car before or come from premium brands”. The non-legal formula (you can cancel from one month to the next) seems completely new, in a context where many brands put forward. lease more traditional. This involves a few characteristics, starting with a gray card in the name of the manufacturer and not the customer. “The fines are coming to our house and I have a team of twenty people full time to deal with the tickets!”. This is the flip side of this formula, as Lynk & Co always charges administrative fees. With increasing traffic laws, especially regarding paid parking in big cities, this can be a double risk for customers. “We will still make sure not to charge administrative fees for invalid tickets (for example disabled cardholders who still receive parking fines, editor’s note)”, assures Alain Visser.

If the monthly rental formula reaches success beyond expectations, it is not the only way to get Lynk & Co 01. “It’s as if Spotify also sold CDs”, laughs Alain Visser. “The customer can always buy a car from us in the traditional way and possibly call one of our partners for financing. But at the moment, leasing is recommended for 95%. However, here again, the offer is attractive and a one price of €41,500 with high quality equipment (panoramic sunroof, heated front seats, hands-free access and start, reversing camera, etc.), Lynk & Co 01 is a little more expensive than its counterpart MG EHS (€ 36,200 in Luxury Premium) and more affordable than traditional brand rivals (€45,650 for the similarly equipped Citroën C5 Aircross Hybrid Shine Pack). It’s also around €10,000 less than the Volvo XC40 T5 Recharge which this new model shares a lot of technically, starting with its CMA platform.

A cousin of the Volvo XC40, it’s pretty cool

Despite the good price/equipment ratio, Lynk & Co 01 is not a cheap car. His presentation, already, is lovely. 4.54 m long, 1.86 m wide and 1.69 m tall, this SUV skillfully combines modest proportions with a few details of originality. This is the case with the headlights integrated into the grille, while the daytime running lights are placed on the bonnet. The 20-inch rims, two cells that are painted blue, recall the fantasy of the Opel Adam. And the textual rear lights, illuminated even during the day, give a legal look to the rear. Like the Hyundai Tucson or Citroën C5 Aircross, this newcomer is on the edge between unity and symmetry. Just the right dose to grab attention without procrastination. 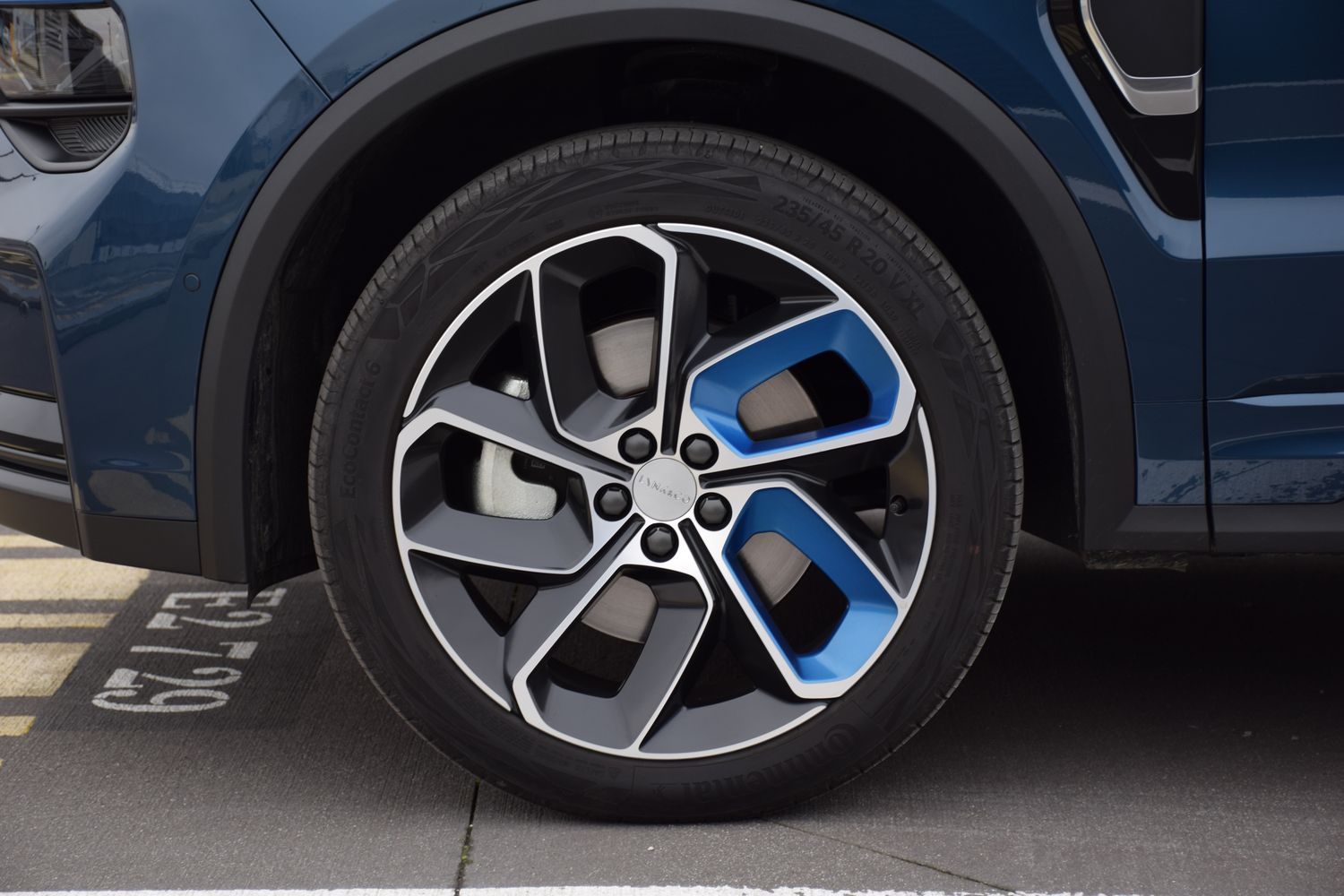 A nice surprise is going on inside. Lynk & Co denies being a premium brand, and this is reflected in the recycled nylon upholstery, which is not very pleasant to the touch. Not yet! The seats are as stylish as they are comfortable and we appreciate the top stitching in two shades of blue that runs through the cabin with instead of plush materials. The wrap-around center console even makes the atmosphere more pleasant than the mid-range versions of the Volvo XC40. Hospitality appears to be generous for the unit and, surprisingly, the trunk is not disconnected from the battery, which is very suitable in the central tunnel. The volume advertised by the brand, 466 liters, seems hopeless to us. It probably doesn’t include the double bottom (almost unique in plug-in hybrids), which extends under the entire holding floor and allows easy storage of two charging cables. 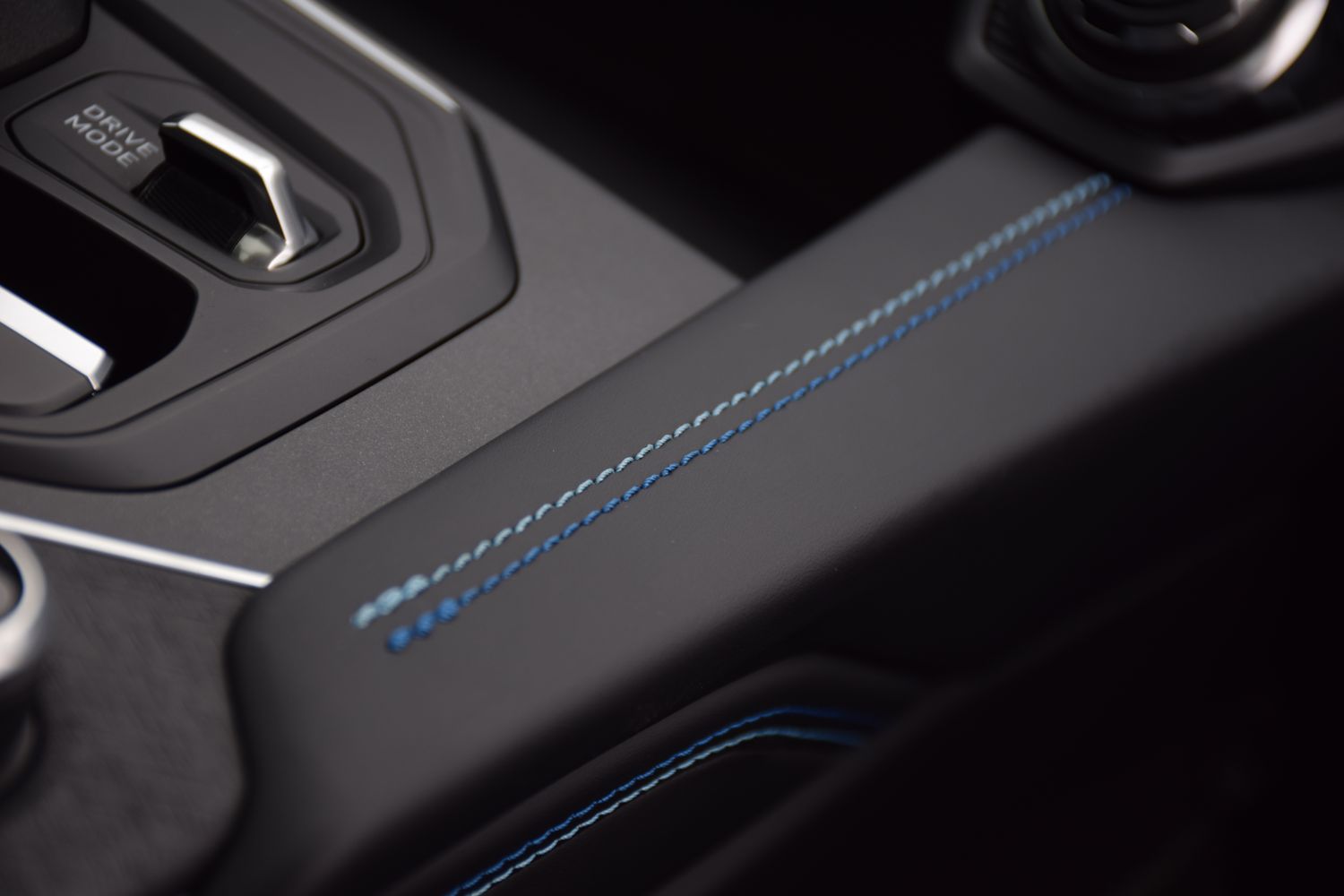 A large 12.7-inch central screen sits in the middle of the dashboard. If it is of good definition, it faces a the program is very slow (whether at start-up or during handling) and correct ergonomics, but still perfect (why, for example, have you set the routing in the “audio assistance” menu?). Fortunately, there is physical climate control, and a very neat design. And we are pleased with the integration of Spotify directly into the application, which makes it possible to do without a Bluetooth connection to listen to music in streaming, as long as you have a subscription.

This first interesting contact continues on the road. If the Lynk & Co 01 shares a lot with the Volvo XC40 T5 Recharge, it is distinguished by its large battery, 17.6 kWh including the useful 14.1 kWh (against 10.7 kWh for Sweden). As a result, freedom is more clear. We were able to travel 70 kilometers without burning a single drop of petrol, since the heater is standard (optional on Volvo) you don’t need to start the internal combustion engine to heat the passenger compartment. It’s simply the best value in the category. Certification in electrical mode is very accurate. Despite the modest power (82 bhp), its position on the gearbox shaft of the two-design CEVT gearbox allows it to work in second or fourth gear. As a result, the liveliness seems adequate for urban or suburban use. Desire comes from the speed of charging: with the charger on board which is limited to 3.4 kW, it takes 4h30 for a full charge. So we get only a few kilometers of freedom when we connect our car during the competition in the shopping center. Today, a charger of 7 kW or even 11 kW seems the minimum acceptable level. 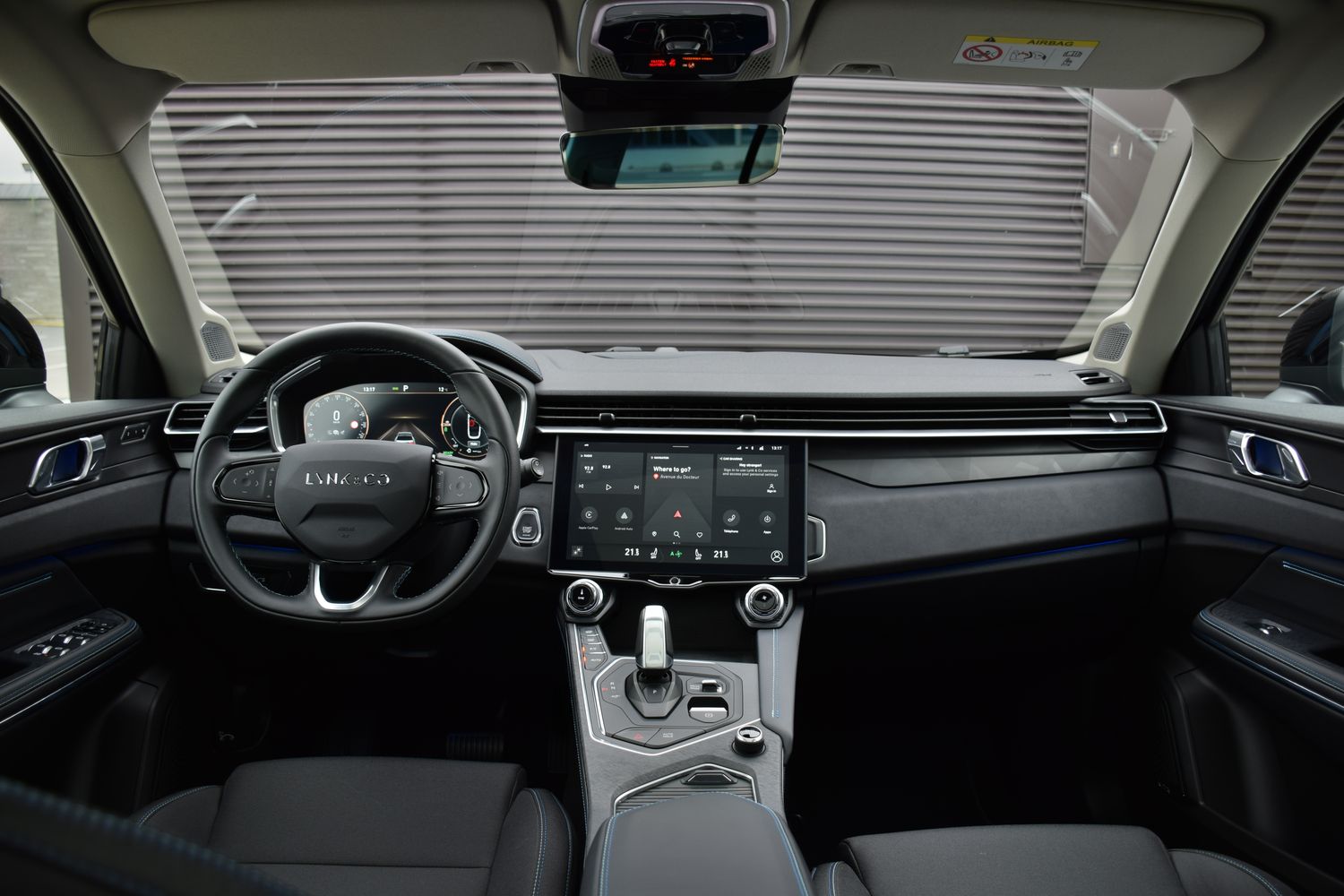 The other side of the coin of this self-proclaimed freedom is that the entire battery is used when the hybrid mode engages by default. There is no buffer left to ensure the boost when re-rolling, which loses color after the battery is empty: 7 seconds left from 80 to 120 km/h compared to 6 seconds when the battery is full. Fortunately, the smoothness remains in place thanks to the seven-speed dual-clutch automatic transmission, while the three-cylinder petrol engine of 180 hp shows convincing expansion. Also, this Lynk & Co 01 is not equipped with the bridle that limits the XC40 to 180 km/h: the top speed here is 210 km/h. Still, if you never charge your car, you don’t see the promised 262 hp. Another nuisance, the start of the city is sometimes done only by the electric car, even if the battery is almost empty. In this case, the three cylinder comes to play in disaster after a few seconds, with bad vibration. In hybrid mode, we identified a average consumption of 8.6 l/100 km on a mixed routewhich seems to be correct.

If a number of start-up brands offer examples on the market and progress that is sometimes hesitant, this is not the case with Lynk & Co. The 01 shows a remarkable homogeneity. The character is completely inspiring and of fascinating lightness. The few vibrations seen around town are more associated with the large 20-inch rims, supplied as standard, than the suspension which does its job well, despite the lack of controlled damping. Speed ​​bumps are absorbed with disconcerting ease and the body supports in the dynamic limits of driving perfectly, without the anti-roll bars having an excessive effect. So the road record is excellent and we only regret the slightly soft steering affected by a little balance, while the transition between regenerative and physical braking could be more fluid. But we know worse from some of the more prominent competitors. 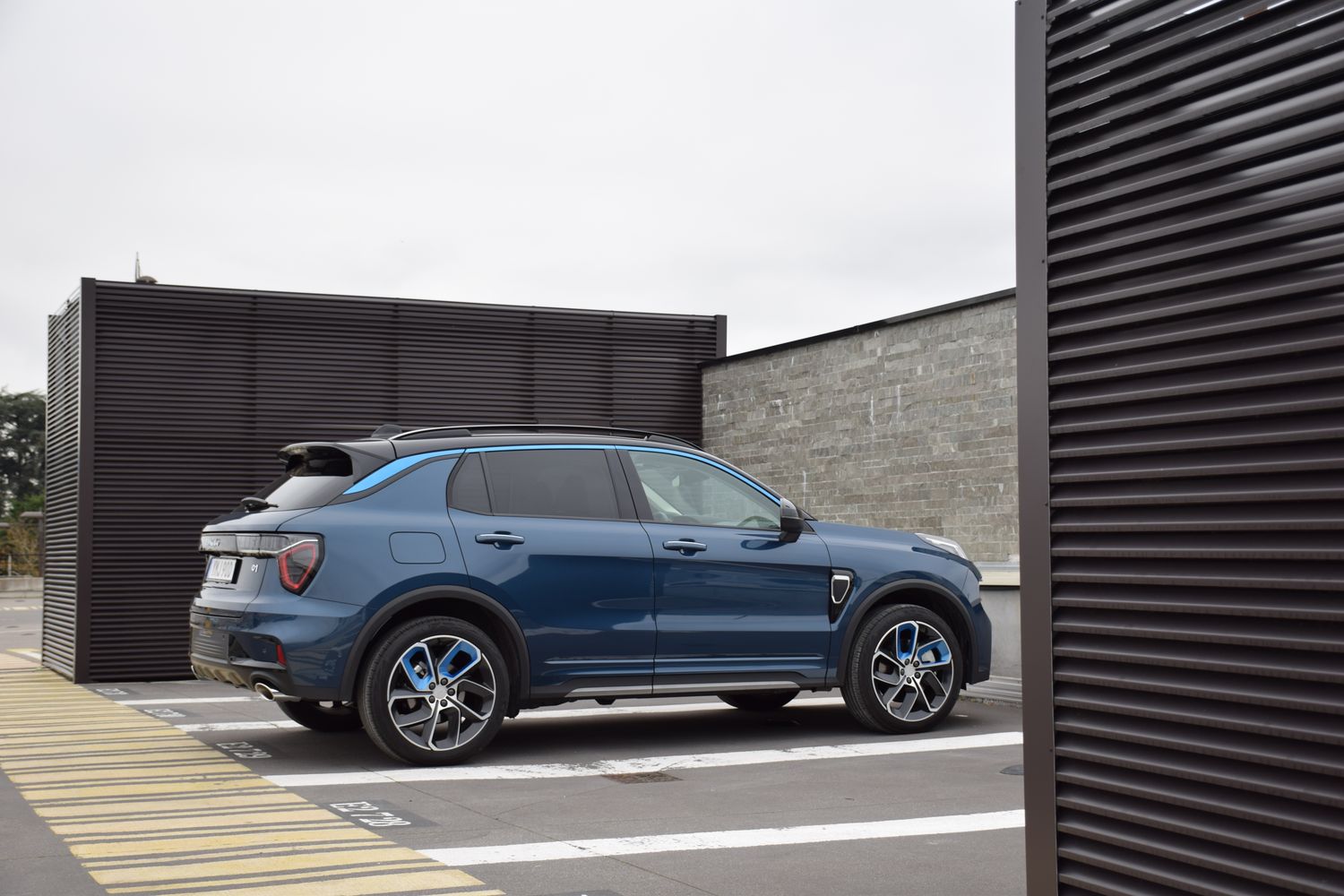 This Lynk & Co 01 is therefore very surprising. The Sino-Swedish brand communicates its original marketing position… To the point of compensating for the characteristics of its plug-in hybrid SUV. “Drive the perfect car” is exactly what is written on the hidden page of the Lynk & Co. website. We will dare to go further, to prove it. 01 is the best choice in its category, including traditional purchases. No worries about maintenance, as the Volvo network is involved. So the biggest flaw of this model concerns its lack of customization possibilities: there is a choice between two colors, blue and black, and that’s it. This will not change as the Lynk & Co company has no plans to launch in Europe the other five models that are already sold in China (compact 02, sedan 03, SUV coupé 05, SUV 06 city and SUV 09 family, while waiting for the 7-seat SUV, 07). “Our goal is not to give our customers a choice, but to offer a new way of approaching mobility”, concludes Alain Visser. “If we launch the second model, it will be 100% electric”. It is very bad for those who hoped to make a real deal with another kind of physical work…

The first months of the connected car Lynk & Co – High-tech

Lynk & co, a hybrid SUV that can be rented

which hybrid SUV is best?

Volvo is killing the XC40 hybrid in Brazil, angering Audi and investing in a charger 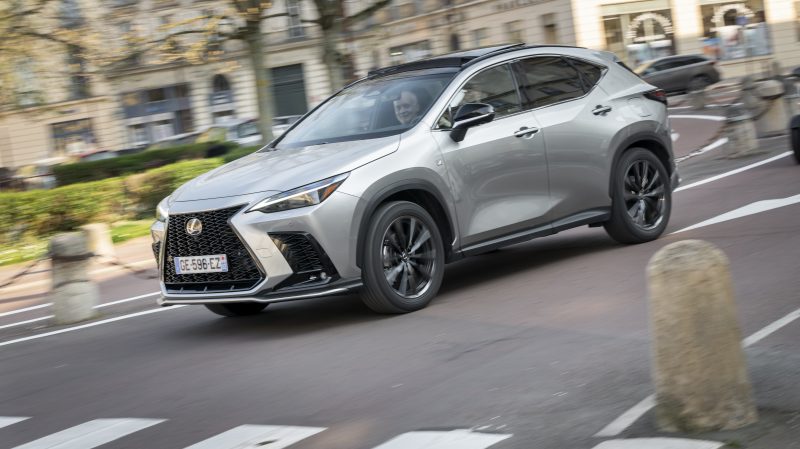