The Lexus RX was at the forefront of the luxury SUV segment and pioneered the plug-in hybrid system, but the model was never a commercial success on this side of the Atlantic. . Unlike the rest of the world, because since its inception in 1998, no less than 3.5 million copies have found a happy owner in general. As the saying goes: Once a Lexus, always a Lexus.

However, the average European prefers the German alternative from Audi, BMW or Mercedes stable. Could the fifth generation of Lexus finally change their minds? Toyota’s luxury subsidiary is expanding its range, as the standard hybrid version (RX 350h) is joined by a plug-in hybrid (RX 450h+) and a sports variant (RX 500h Turbo).

The new Lexus RX uses a language called “The Next Chapter” also shared by the more compact NX and the 100% electric RZ. The new grille is an eye-catcher: the front end is a little less dramatic, but still eye-catching. If it’s good? It mainly depends on the color of the body. Either way, we think the rear is the most successful, with its blacked-out C-pillars suggesting a floating roof. The taillights are now integrated with a light strip, giving the new Lexus RX a more aggressive look than its sleeker predecessor.

The new Lexus RX is built on the GA-K (Global Architecture K) platform that the NX is also based on, although it has been heavily modified to accommodate the larger body dimensions. For example, we see a longer and more pronounced wheel, so there is more room for additional suspension arms. Engineers also worked on body stiffness and weight. At 4890 mm, the new model is the same length as the previous Lexus RX, but its wheelbase has increased (+60 mm).

The use of stronger materials, including aluminum and resin as well as steel, means body parts such as side beams, doors and front fenders are lighter. Thanks to this nutrition, the new Lexus RX weighs 90 kg less than its predecessor, has a 15 mm lower center of gravity and wider tracks: 15 mm in front and even 50 mm in the rear. The Lexus RX 500h will be offered only in the F Sport Performance version, a recognized equipment level with redesigned bumpers and special 21-inch rims.

The dashboard of the new Lexus RX follows the principle of Less is More, with a clean and functional interior, very refined. Clean finishes, beautiful materials and beautiful design create an oasis of calm. This feeling is further enhanced by excellent soundproofing, a Mark Levinson audio system (unlike the NX, also available on the RX 450h+ plug-in hybrid) and Lexus Climate Concierge, an umbrella system that controls climate and heating and ventilation. of the front seats according to the appropriate temperature.

The Lexus Link multimedia module and multi-function steering wheel with Touch Tracer touch controls are all identical to the Lexus NX. It takes a bit of trial and error to get used to, especially since you have to look at the heads-up display instead of the central touchscreen, but we wouldn’t say that’s forging a blacksmith. Of course, the new Lexus RX comes with adjustable mood lighting, always-on connectivity and Apple CarPlay (wireless) and Android Auto (wired) connectivity. Another positive: the RX has a digital rearview mirror that ensures a clear field of vision.

The battery pack is now mounted in a sandwich module under the floor, which means that the load capacity of the hybrid and plug-in versions remains the same. The loading floor is flat and the tail section is low, making loading and unloading easier. But the trunk of the new Lexus is still not very spacious, with a maximum volume (under the luggage cover) of 461 liters. Especially the rear passengers benefit from a longer wheelbase. The rear seats can be adjusted; a seven-seat version is not planned. 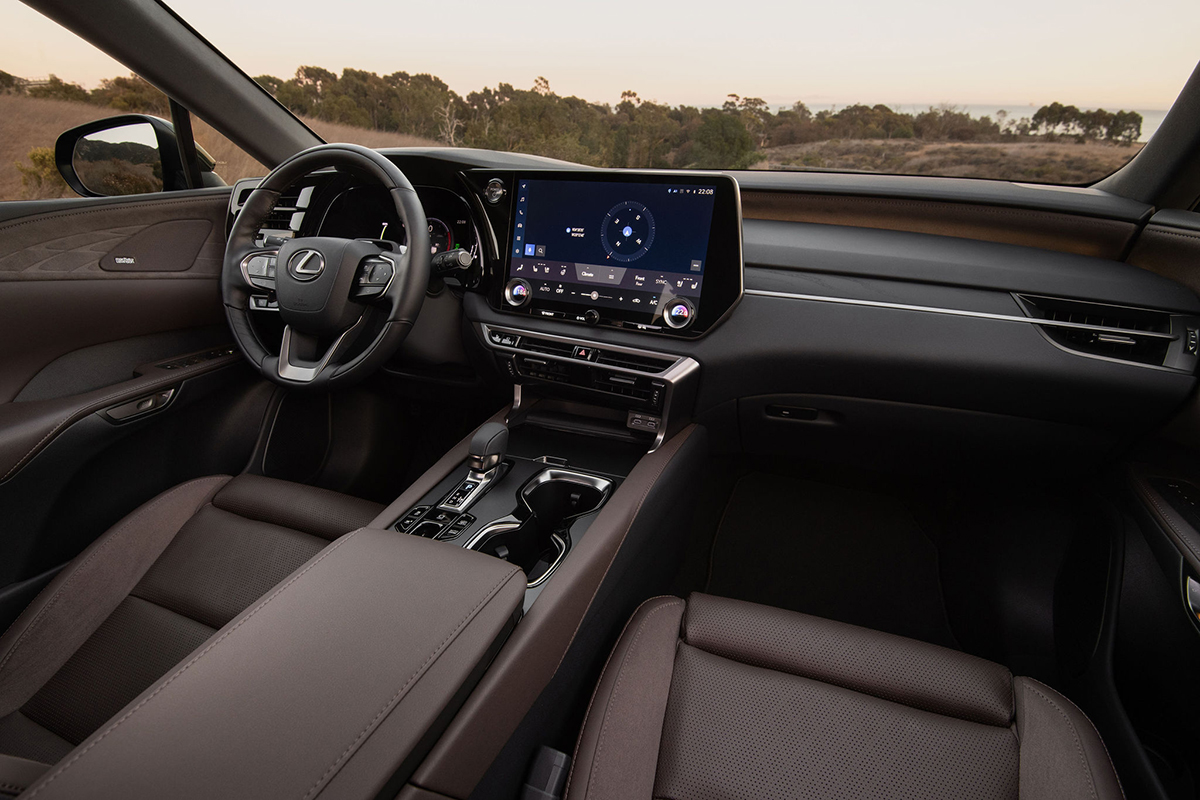 The Lexus RX 350h, which is now equipped with a 250 hp 2.5-liter 4-cylinder gasoline engine, is again an entry-level model. The plug-in hybrid system also includes a metal hydride battery and two electric motors, with the E-Four’s electric drive coming as standard. The race from 0 to 100 km / h takes 7.9 s. The average consumption of Lexus RX 350h is 6.3 l/100 km. This translates into CO2 emissions of 142g/km.

The Lexus RX was the first SUV with a hybrid drivetrain, but this fifth generation is also the first to be offered with a plug-in. The RX 450h+ plug-in hybrid hybrid combines a 2.5-liter gasoline engine with two electric motors, powered by an 18.1 kWh lithium-ion battery. The Lexus RX 450h+ has an average fuel consumption of 1.2 l/100 km, equivalent to 26 g/km of CO2. Running from 0 to 100 km / h is achieved in 6.5 s.

The 500h is also new to the Lexus RX lineup. It’s not just a higher quality and more powerful version. The E-CVT of the 350h and 450h+ has been replaced by a six-speed automatic transmission, while a different engine hides under the hood. A four-cylinder engine with a displacement of 2.4 liters to which a turbo was added. This results in a system output of 371hp and a peak torque of 550 Nm. With a 0-100km/h sprint time of 6.2s, the RX 500h is no faster than the 450h+. But it is more powerful, mainly thanks to the Direct4 technology inherited from the electric Lexus RZ. 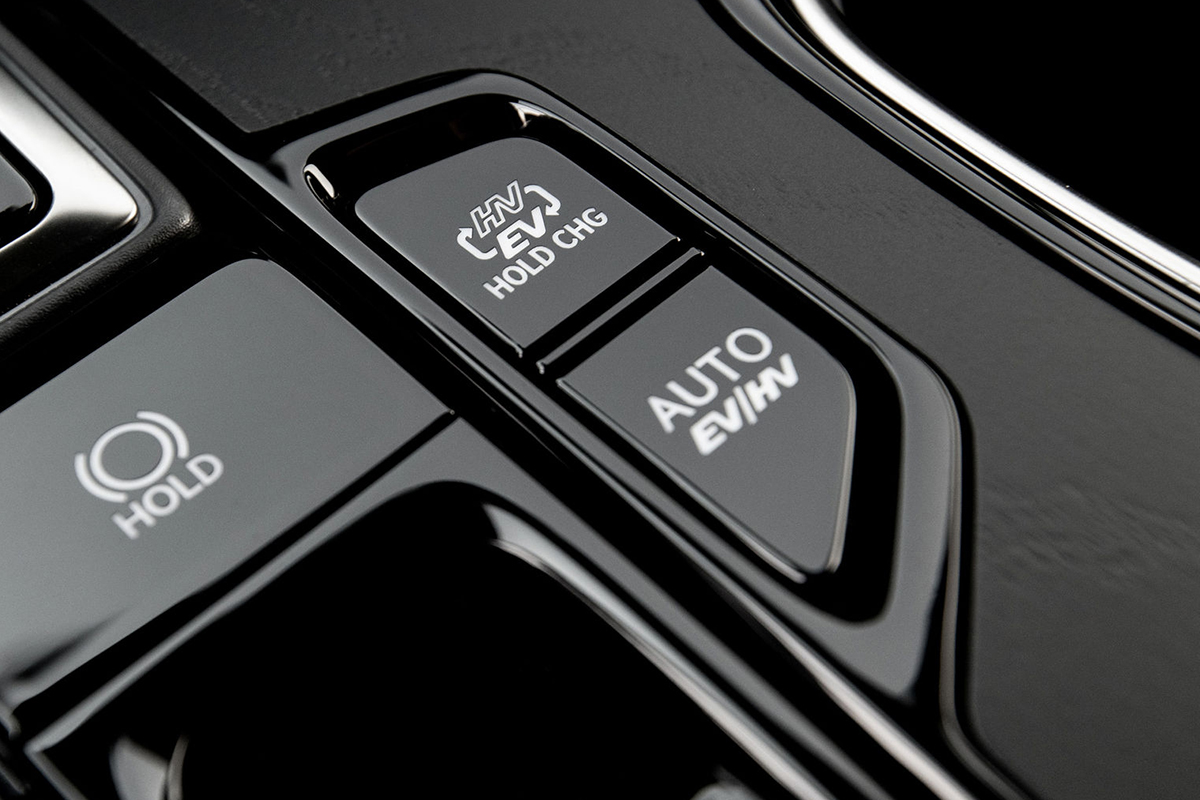 The batteries are placed under the floor of the occupants, so they have no effect on the interior space or the trunk. The Lexus RX 450h+ has a 6.6 kWh onboard charger. Under good conditions, 2.5 hours are enough to fully charge the battery.

The Lexus RX 450h+ battery promises a range of 65 kilometers and a top speed of 130 kilometers per hour in electric mode. When the batteries run out, the plug-in hybrid easily switches to the self-charging drive system, keeping fuel consumption and CO2 emissions within reasonable limits.

The Lexus RX 450h+ always starts in EV mode, at least until the batteries run out. Buttons on the center console allow the driver to manually select the hybrid drive mode, so the petrol engine comes in to save extra energy when needed. HV mode maintains the battery’s charge level, so you have power left to enter the low-emission zone. You can also charge the battery pack via the combustion engine, if absolutely necessary.

The Lexus RX 450h+ has a heat pump that draws heat energy from the outside air to heat the cabin, reducing the effects of climate on the electric range. So-called Shiftmatic transmission paddles control six levels of engine braking.

The suspension of the new Lexus RX combines a MacPherson strut system at the front and a multi-link system at the rear. Thanks to increased body stiffness and reduced weight, the hybrid SUV is faster, without sacrificing comfort. Especially in combination with the adaptive variable suspension (AVS), standard on Fair and F Sport models, which controls the damping of each wheel individually and offers a choice between Normal and Sport modes. The chassis now exhibits a balance of power that was lacking in the previous generation Lexus RX.

Lexus is also very proud of the vehicle’s Braking Position Control, which ensures the new RX’s brakes are strong and linear. The RX 500h F Sport has larger brake discs and six-piston aluminum calipers. It also has a rear axle with Direct4 technology, inherited from the electric Lexus RZ, which manages the driving forces not only between the front and rear axles, but also between the rear wheels themselves. The rear electric motor is also more powerful, which, along with the six-speed automatic transmission, makes the powertrain more responsive.

The Lexus RX 350h is a pleasant and economical companion, but the stability on board is disturbed by the annoying behavior of the e-CVT. The RX 450h+ then drives more comfortably, even when the batteries are not fully charged. Thanks to this extra power, the hybrid version of the plugin is fast and quiet. And due to low batteries, the impact on handling is minimal, even if we see that this SUV is not a featherweight. 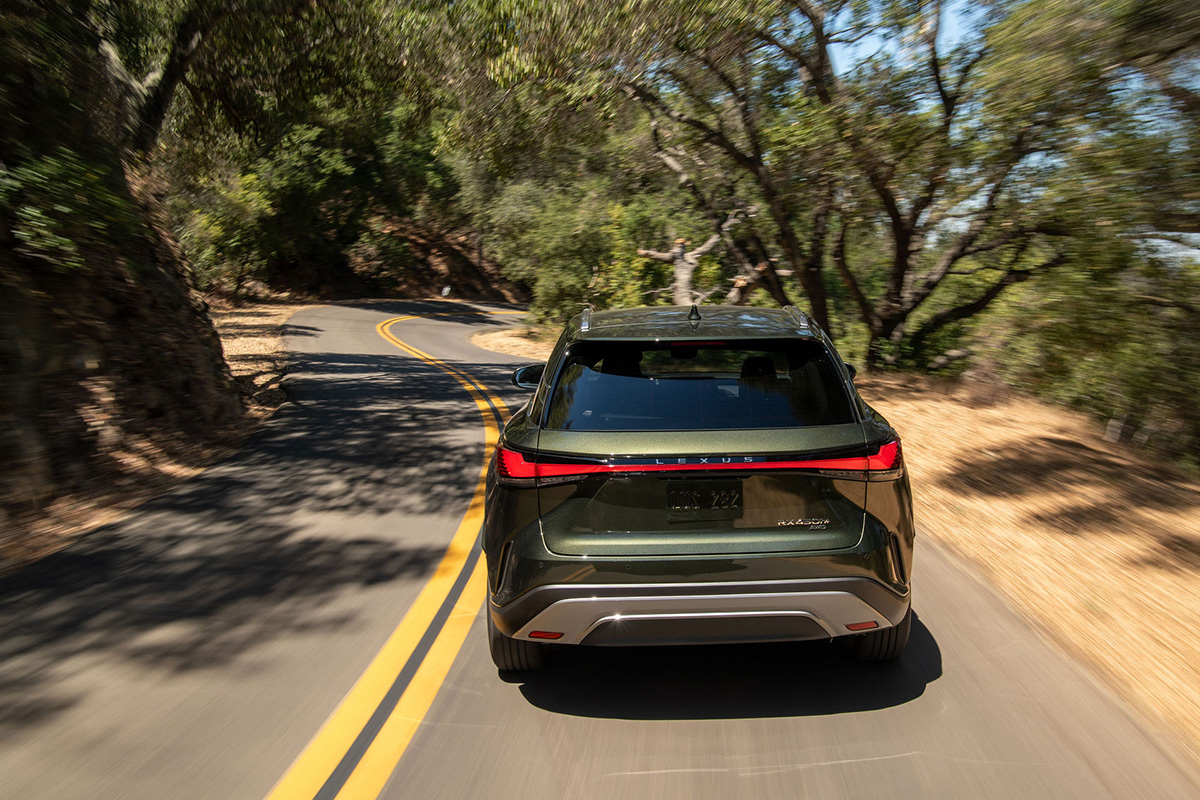 Production of the new Lexus RX will begin in the summer of 2022, and European models will again roll off the production lines in Japan. The launch is planned for November, and the first deliveries will begin in January 2023.

Although you can already reserve a copy through the website, not all prices of the new Lexus RX have been announced yet. But the Belgian importer is still giving clues. The RX 350h Performance Line is available from €77,450, the 450h+ and 500h F Sport Performance Line from €87,040.

Lexus Belgium expects the RX 450h+ to take the lion’s share of sales, but the 500h could also attract surprising interest. 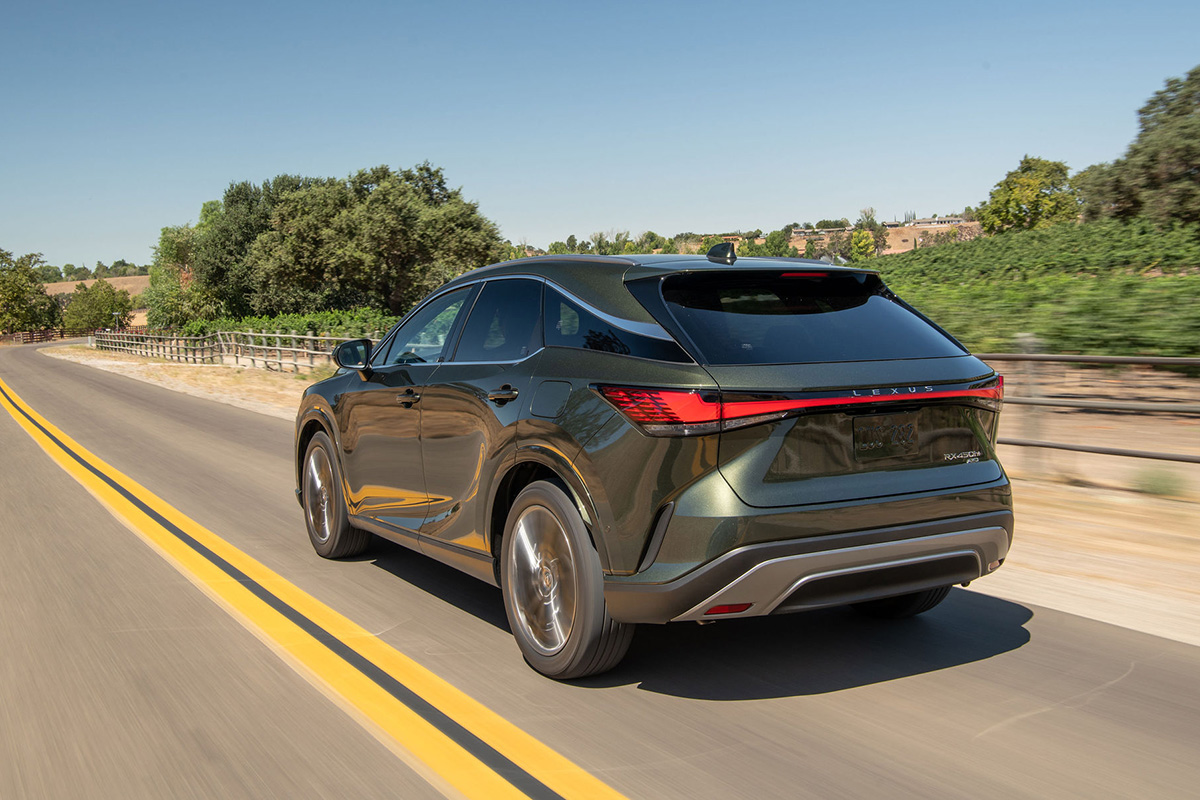 The new Lexus RX retains the characteristics of its predecessor, but increases its attitude. The RX 450h, a rechargeable hybrid, is aimed more at professional buyers, the RX 500h, sporty, at younger customers. This family extension gives a new impetus to the SUV by combining the familiar luxury and comfort with an additional touch of change. At 350, however, it has a lot of potential, so it is easily replaced by two new versions.

Still, the Lexus RX is a little weird, with a body design that won’t appeal to everyone and a multimedia system that uses different values ​​than what we’re used to from the German competition. We can see this as a weakness, but it is also a strength of this fifth generation. Talents are not lacking, you just have to know how to adapt to his natural behavior.

Review: The NX 450h is the SUV that Lexus owes to Brazil

Lexus SUVs have more electronics in the 2021 lineup

Unusual. He updates the F1 cemetery and handles their restoration