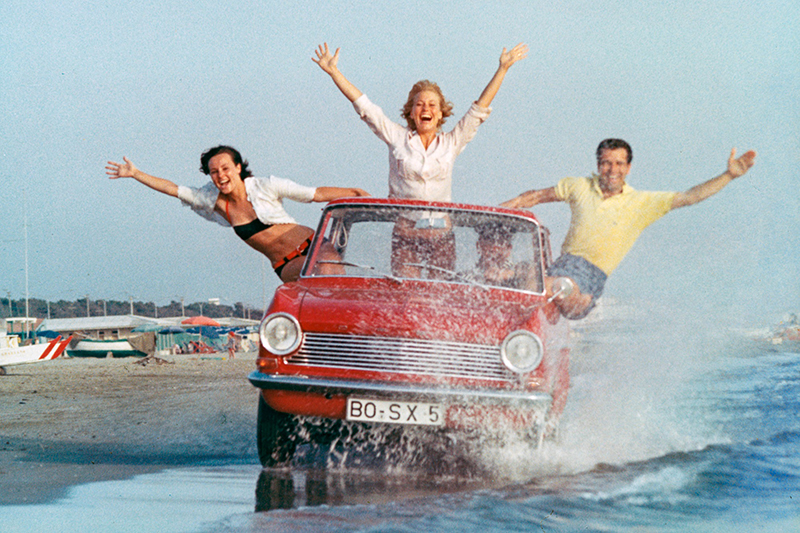 In 1936, Opel was the first car manufacturer to bring to market a small, family-friendly and, above all, affordable car: the Opel Kadett. With its metal unibody body and light weight, this model was a pioneer. However, the pioneer of today’s segment of the compact model was actually the Opel Kadett A from 1962. A large boot, interior space for four, a lively engine and low maintenance costs were the keys to success. Undoubtedly, the best example for the so-called “German Economic Miracle”. Opel produced around 650,000 Kadett A between 1962 and 1965.

60 years ago, Opel – which this year celebrates 160 years – ushered in a new era with the Kadett A, similar to what the brand is doing again today with the sixth generation Astra. The best-selling subcompact continues Opel’s tradition of democratizing innovation and, for the first time, is available in hybrid electronic versions. In 2023, the Astra range will be enhanced with battery-electric versions. In addition, the new five-door Astra and Astra Sports Tourer offer advanced technology such as IntelliLux® Pixel Light Light, glare-free headlights, consisting of 168 LED elements. The new Astra is also a design statement for the German brand, bold and authentic thanks to the new “face” of the brand, the Opel Vizor. Inside, the cabin has a Clean Panel, a high-quality interface, intuitive and fully digital.

Opel Kadett A: a car with an economic miracle

After the war, Opel revised its model range. In the years of the economic miracle, practical and affordable cars were in high demand. In 1962, Opel built a brand new production facility in Bochum specifically for the Kadett A. The first post-war Kadett rolled off the assembly line in October 1962.

The new Kadett was a prime example of lightweight construction. The Saloon weighed only 670 kg, the Caravan, which followed shortly after, only 720 kg. Furthermore, the Kadett was very affordable, with prices starting at 5075 Deutschmarks. Engineers kept production as simple as possible. The bodywork consisted of only 12 main parts; the side panels were made from a single sheet of steel. The Kadett A’s low maintenance costs were also due to its design. Thanks to the maintenance-free suspension and steering linkage, the model did not need grease nipples. Maintenance and spare parts costs have been carefully calculated. A 10,000 km inspection, including materials, costs only about 30 marks.

Sleek, simple, innovative and comfortable in front of the competition

The Kadett offered all the advantages that, in the 1960s, made it a desirable model: elegant design, high flexibility, innovative technologies and practical features. The waist was low and the wide glazed surface gives a good look. The interior space surprised drivers who were previously used to small cars. It was quite possible for four people to travel comfortably.

In addition, the oil filler cap was on the outside, an innovation that was not available from any other German manufacturer at the time. “You will never smell gasoline in the trunk,” in a direct message to Wolfsburg. Most of the cargo was therefore only for storage.

With its modern water-cooled front engine, the rear-wheel drive Kadett offered another design advantage over the Beetle. Initially, the 993cc four-cylinder engine made 40hp, and from 1963 it was also fitted to the new Kadett Caravan. The powerful, short-time engine attracted attention thanks to its spontaneous delivery of power and elasticity, allowing the Kadett to reach a maximum speed of 120 km / h. The 1.0 liter S engine with 48hp, used for the first time in the new coupé from 1963, could even reach a top speed of 130 km/h.

According to one brochure of the time, “When the Kadett is cornering and on uneven surfaces, it maintains unusual stability, always staying in its lane.” Balanced weight distribution and a new rear axle contributed to neutral and secure dynamic handling.

A car as wide as a minibus: The first caravan

The great advantage of the Kadett A generation was that the entire family of versions, saloon, coupe and station wagon, could be built on the same platform. At the 1963 Geneva Motor Show, about six months after the sedan debuted, Opel presented the Kadett A Caravan, Germany’s first compact station wagon. A much-appreciated option was the rear-facing child seat, which allowed up to six occupants. Opel quickly became the market leader in the segment. In the mid-60s, in Germany, almost all vans, used as a second car in the family, were Opels. Since then, a car (“gari”) similar to a van (“van”) – that is, “car-a-van” – has been part of all new generations of Kadett and Astra.

Opel presents the Astra XS, a show car based on the new Opel Astra plug-in hybrid

The “grandfather” of our Chevette: the Opel Kadett A turns 60

Chevrolet Kadett: the icon of the 90s has more tradition than meets the eye

Ypres Rally: Thierry Neuville (Hyundai): “I feel that we can go faster”