The race to develop the most sophisticated electric vehicle has just recently started. The Chinese automaker GAC Motor has unveiled their newest concept vehicle, one of the most futuristic in recent memory, along with an inventive interior idea. A conceptual plan that will not make it into serial production in its entirety.

The design has always reigned supreme; it is one of the highest qualities that shine through all models on the market, having been largely advanced through suggestive concept cars from which very specific details and features are derived, although on occasion, and depending on public acceptance, go entirely to production, bridging the usual gaps in security regulations. This will no longer be the case, according to the innovative technology shown by the Asians at GAC Motor.

The Chinese are well aware that differentiation is critical, particularly in the area of electric vehicles, and much more so if they want to acquire a foothold in the European market’s zero-emissions offer. The GAC Time Concept is reminiscent of Mercedes’ Vision EQXX, the German automaker’s vision for its electric future. Both have a similar aerodynamic lateral design with an arched roofline that, in the case of the GAC, virtually becomes much more stretched, resulting in an extremely low drag coefficient of only 0.191x, with distinct shoulders along which it runs. 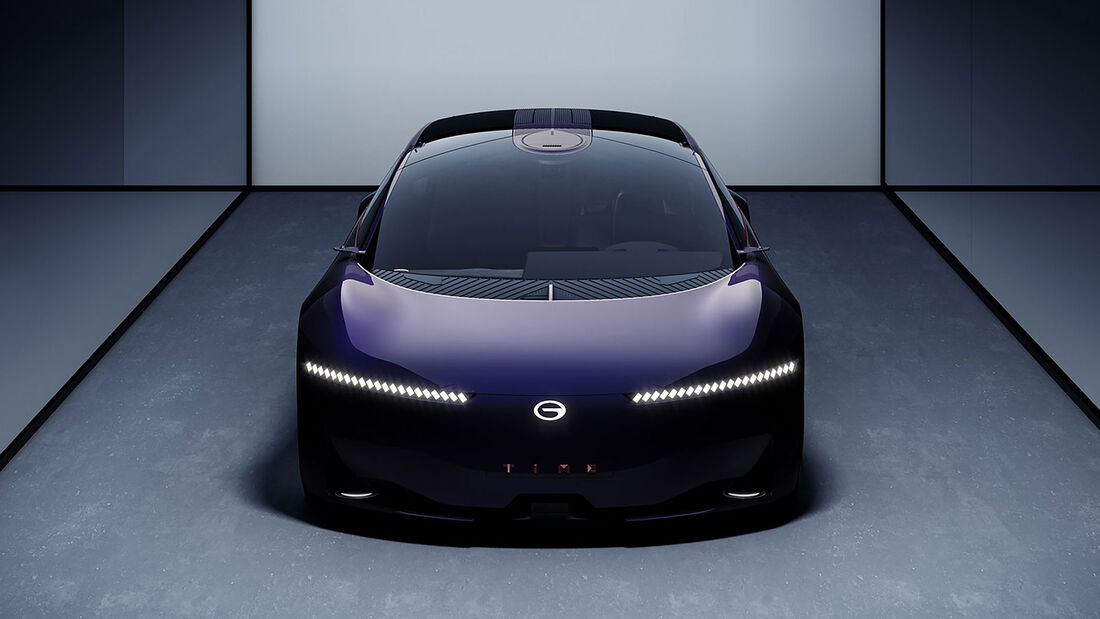 This proposal provides some very remarkable aspects, such as the complete lack of pillars. As you can see, the construction is composed of a single component that spans from the windshield to the back, supporting a massive glass roof. Retractable door handles and high-resolution cameras in lieu of rear-view mirrors. Also, the headlights are confined to a narrow band of LEDs, a level of discretion that is not present at the back, where the light groups display a variety of applications in three dimensions.
The attention to detail extends to the wheels, which include an integrated cover and hence cannot be classified as alloy wheels. Additionally, the panel that fills the area includes unusual illumination that flashes with various light effects. Both, as the inner area, which is entered by a pair of doors on the left side, and as a reverse-opening, which provides ample space but only seats three people.

The GAC idea has a single driver seat with floating digital instruments, while the right side structure features an “L”-shaped seat for two passengers. GAC is committed to an unmatched level of tranquillity on board, which is why they used LED lighting to create a warmer environment: ambient lighting is combined with rose gold details and the interior floor’s wood, as well as dimming the panoramic roof, which can replicate the Rolls-Royce‘s roof. What GAC has withheld are the technical parameters for this electric idea, while the company recognizes that this is not critical information to know given the concept’s non-production status.

The transition from internal combustion engines to electric vehicles heralds a new era in automotive engineering. However, the new era requires a new design, according to Chinese automaker GAC, which is highlighting its concept of an all-electric luxury sedan with the Time Concept.

Aerodynamic efficiency is critical for extending range, particularly with pure electric propulsion. The Time Concept is said to have a drag coefficient of 0.191 due to its highly elongated teardrop form. The cabin starts well in front, where the flat windshield merges into a similarly flat roof arch that stretches far beyond the back.

The lateral window line likewise follows this arch, since there are no visible supports. The whole body looks to have been smoothed out. No door handles are provided; instead, tiny rearview cameras offer a vision of the back. Also, the rims are aerodynamically coated. The front LED headlights are composed of several separate parts that function as running lights when the vehicle is started.

The rear-end light display is even more amazing. Under the tear-off edge, light strips pulse, visually mimicking a three-dimensional tunnel effect. When the wheels revolve, they provide additional light effects; space scenarios or three-dimensional turbine blades may be projected.

The Time Concept features just left-side doors. They open in opposing directions without the need of a B-pillar and, when combined with an upward-opening roof piece, give broad access to the inside. The driver sits in the front passenger seat. GAC offers an L-shaped seating landscape for a maximum of two persons, with one passenger sitting and the other laying down.

A lively mood is created with light hues, rose gold accents, and a hardwood floor. A pond with small wave motions is produced by light underneath the driver’s seat. The expansive, dimmable glass roof and LED ambient lighting, which can also create a starry sky on the roofline, guarantee that the appropriate mood lighting is always available.

In front of the driver, seemingly free-floating digital gauges contrast with a tiny tree placed at the dashboard’s border.

Apart from the requirement that it be entirely electric, the designers have made no mention of drive technology. Additionally, it is clearly evident that the Time Concept will not result in a Chinese manufacturing model. Individual features and concepts, on the other hand, are likely to appear in future GAC models. 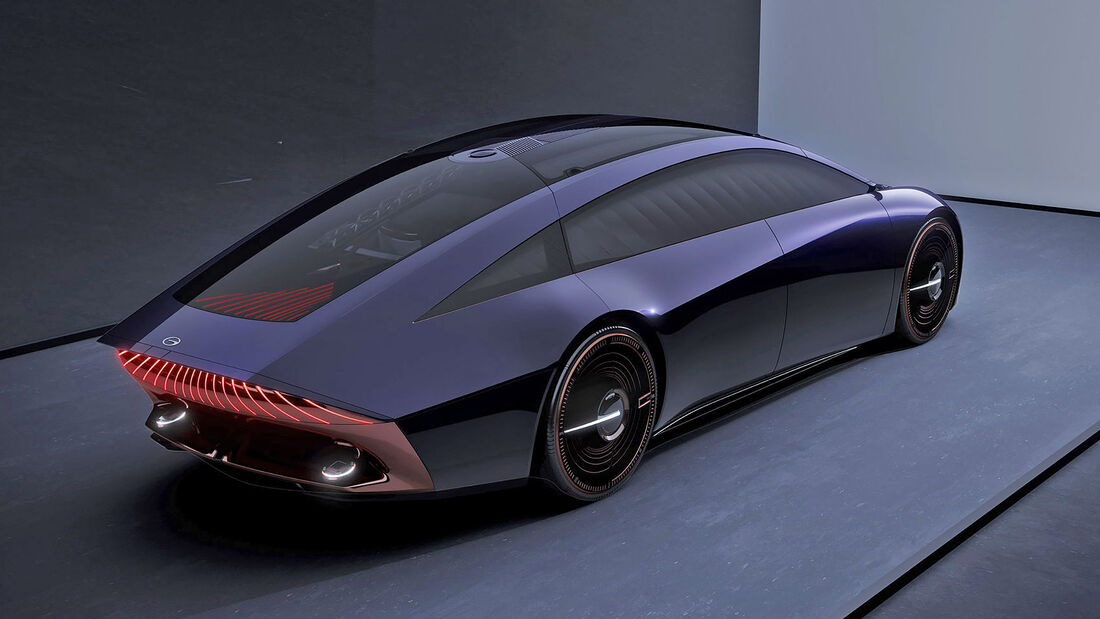 The Teardrop design language on the blade has a teardrop-shaped form with rounded edges and smooth surfaces. It has a short hood that slopes sharply toward the windshield. The roofline, too, is sloping, extending to a lengthy rear end. The aggressive look is reminiscent of Mercedes-EQ Benz‘s vehicles.

Technology and design are inextricably linked.

This model’s design incorporates technology to provide a more contemporary and beautiful appearance. For instance, the wheel arches employ holographic projection technology to create a three-dimensional picture, while the headlights include moving LED blocks dubbed Time Ripples. At the back, several LED strips provide an equally appealing light signature.

The doors are suicide-opening, and a portion of the roof has been elevated to permit access to the inside. This creates a really intriguing and adventurous picture. Inside, the contemporary appearance is still rather appealing. To construct it, they chose to give a living room with a very comfortable design and based on figures such as the Klein bottle or the Möbius strip, both of which are implausible but produce a very attractive impression.

Due to the fact that this is a conceptual design, some of the design elements are not totally feasible. The driver’s seat is situated in the center of what seems to be a pond. Of course, this is not water, but a design with a crystalline wavy grain. The instrumentation and infotainment systems are controlled through a series of OLED displays.

The steering wheel is a yoke design, which is becoming more common in this sort of vehicle. The back seats resemble a couch that links to the front and provides an abundance of comfort for the passengers. They are upholstered in white and have wood inserts for an added touch of elegance.

Concerning its merits, GAC has refrained from disclosing details about the powertrain or batteries. Yes, it has stated that it is equipped with a battery of radars and sensors capable of doing level 4 autonomous driving. It’s worth noting that this is a research model and so will not be produced, however many of the technology and design features may make their way into other prospective models.