After spending months trying to learn more about Land Rover’s new Defender, the company behind it has finally revealed it to the public at the Frankfurt Motor Show.

Finally, yes, because for months, we have been bombarded with drawings and pictures of cars covered in mystery. There was this surprise appearance of a model on the set of the next James Bond, but hey…

So, we are not surprised by the end result, but we are happy about it. Bringing a beautiful model whose design has never changed was no small task for the designers. The defender had to be modern at all levels, but also develop a style reminiscent of its glorious past.

The new version is assembled on a new platform that takes the code name D7. The latter is intended to be more stable and stable, allowing the car to cope with adverse conditions. In addition, due to the presence of aluminum in the structure, it is light. Despite everything, the lightest version of the model still weighs 4815 pounds.

At the launch of the model, scheduled for next spring, two body types will be available. First, a short-wheelbase three-door version, the Defender 90. A standard-wheelbase, five-door version, the Defender 110, will also be on the menu. An extended wheelbase variant, the Defender 130, is expected to be added to the nomenclature towards the end of next year. This will develop an eight-seat configuration. Note that the 90 can be ordered with six seats while the 110 can seat seven, if it is the buyer’s desire.

Under the hood, two mechanics will also be present. The base engine is a 2.0L turbocharged 4-cylinder good for 296 horsepower and 295 lb-ft of torque. Alternatively, it is a turbocharged 3-liter inline-6, the engine taking advantage of the limited hybrid, which is offered. The latter suggests a total of 395 horsepower and 406 lb-ft of torque. And finally, the Defender will be able to finish 0-100 km / h in less than 6 seconds.

The only transmission offered is an automatic type and has 8 gears. It is mated to a 2-speed transfer case and permanent all-wheel drive. 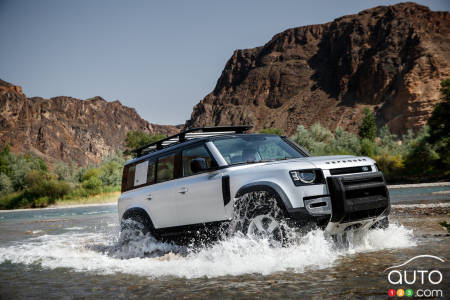 When it comes to off-road capability, the Defender will sit 0.8 inches higher than the brand’s other products, which translates to 11.5 inches of ground clearance. Approach and departure angles are 38 and 40 degrees respectively, allowing for very aggressive attacks. Towing capacity is 8,200 pounds and if you’re going to cross a river, you can venture out if the river has a maximum height of 35.4 inches.

In addition, the car will benefit from the latest generation of the Terrain Response system, which provides a number of electronic devices for off-road driving. On board, the latest evolution of the company’s multimedia system will also be included.

We will of course have more details once the car is in our hands for testing. We can predict the last big disappointment, which will be given for some $ 50,000 on the other side of our border. For Canadian prices, you’ll have to wait. 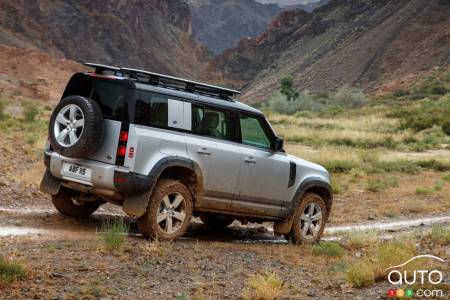 Land Rover Defender debuts the 007 version in the new film, but Brazilians will only see the SUV in the cinema | versions

Ford Transit 2023 finally arrives in Brazil in a van version, but it still has a chassis | versions