Rewind to February 6, 1967. In the 24 hours of Daytona, where the first round of the world championship of sports prototypes took place. A year after Ford beat the Scuderia in the Le Mans endurance race, Ferrari is fighting hard on American soil.

The red “giant” put the Ford GT40 army through their paces and took over the entire stage in a dominating old-school display. Victory goes to the 330 P3/4 designed by Mauro Forghieri, driven by Lorenzo Bandini and Chris Amon. Maranello’s trophy cases are full to bursting, but this victory has been given a place of honour. And it serves as inspiration for this Ferrari Daytona SP3, the third member of the so-called Icona series that started in 2018 with the Monza SP1 and SP2.

The bulging wheel arches and wider windshield are those of a 1960s sports model, but the beauty is all about aerodynamics. Don’t look for wings, tea trays or live flaps; the lines had to be kept as clean as possible.

Most of the downforce is therefore provided by the floor, which pulls the Daytona towards the ground at high speed. Ferrari won’t release specific numbers, except to say the SP3 produces more power than competing supercars, which are loaded with spoilers.

The lateral placement of the radiators encouraged the engineers to create air intakes whose openings were in the doors. The breeze collected through these vents circulates around the body of the Ferrari Daytona SP3, reducing the power train and pushing the stern more strongly downwards. This option is also the origin of a certain position of the side mirrors, which are located on the front fenders. Not only because they do not block air flow, but also because this placement improves visibility.

Designers also worked on lighting fixtures. The front ones can be lit, the aft ones consist of thin LED strips that slide between the rear horizontal slats. It’s nice to look at, but it’s the two centrally placed exhaust pipes that draw all the attention to them.

When the heavy gullging doors are opened, you watch the carbon air that comes out between the front wheels. As if you are tasting the real example of sports. The monocoque is closely related to the basic structure used by the LaFerrari Aperta, but the knowledge gathered in Formula 1 allowed many improvements to be made that would make the Ferrari Daytona SP3 even lighter and more rigid.

Getting into the plane requires some agility: first you have to put your buttocks on the narrow seats, then push your bent body and legs back into the narrow cockpit. That’s no small feat and certainly not if you’re wearing a hat either. Removing the targa roof makes things a little easier. The copper carriage, light as a feather, is in one piece and cannot be blown away. If it rains on the way, you can take the emergency hose ahead. But then you can not go faster than 120 km / h.

The Ferrari Daytona SP3 does not have separate seats; these are an important part of the basic structure. A deliberate choice that should further improve the on-board feel by transmitting the vibrations of the power train to the driver through the spine. Fortunately, the steering wheel and pedals are adjustable, so you can quickly find a comfortable driving position in the forward-mounted cabin. As your feet are on the front axle. The curved windshield and digital rearview mirror, which the Daytona inherits from the 812 Competizione, need time to adapt.

The lower-level dashboard gets the full instrumentation that Ferrari introduced on the SF90 Stradale, including a less cluttered menu logic and more responsive touchscreens on the multifunction steering wheel. It’s no longer square, like in the LaFerrari, and it’s reduced in diameter, but it still houses a lot of controls, so you don’t have to take your hands off the wheel while driving. 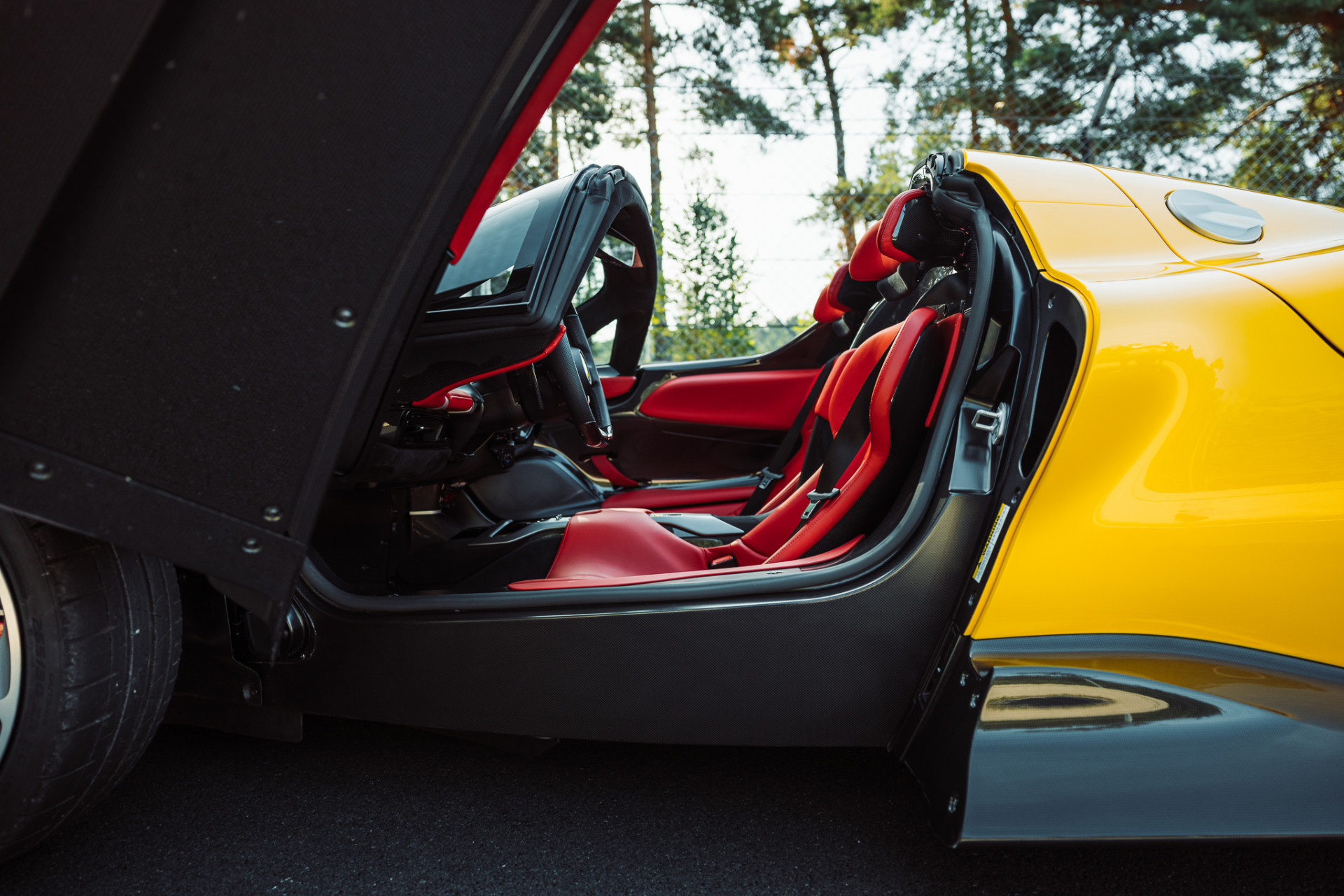 The 6.5-liter engine is another evolution of the LaFerrari hybrid, but free of its complicated electric module and heavy battery. The power is not there, however: even without electric assistance, the engine develops 840 hp, the maximum power of which is reached at 9250 rpm. A maximum of 697 Nm is also available at high revs, as it is only released at 7250 rpm. 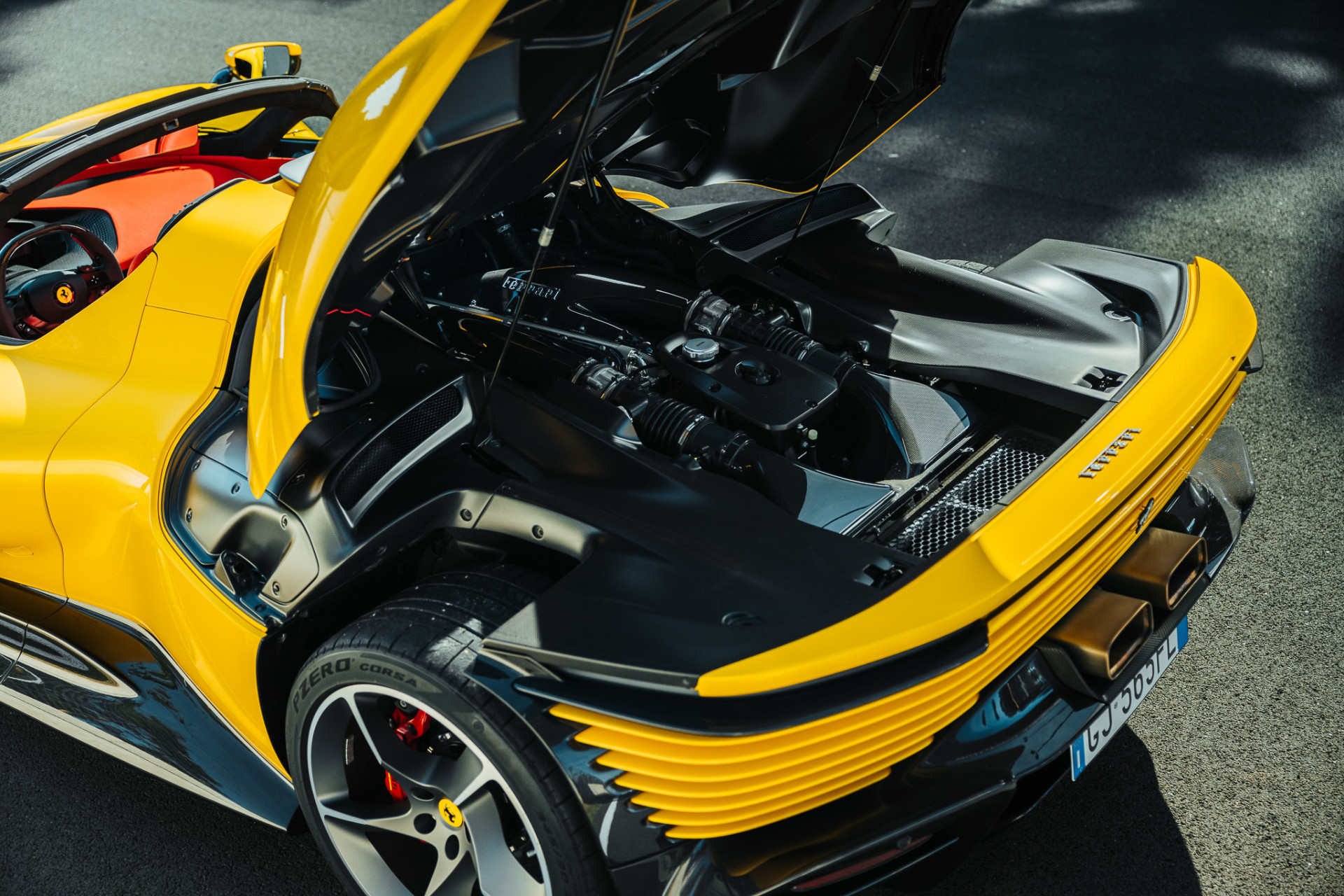 Once the V12 is at room temperature, we push the needle of the digital tachometer to 9500 rpm. It’s like hitting a soprano in the balls. The smooth sound of the Ferrari Daytona SP3 is somewhat reminiscent of that of an F1 supercar, but with less volume. The soundtrack is better than anything you’ll find on Spotify, with subtle nuances throughout the rev range. Absorbing noises and mechanical sounds add depth to the concert.

And kudos to the sound engineers, because it’s not the exhaust but the Ferrari Daytona SP3 engine that rules the show. The gearbox delivers the numbers, as a special setting allows the seven-speed robotic gearbox to shift particularly aggressively. Still in race mode, the V12’s brief but violent intervention is akin to that of an F16 breaking the sound barrier.

Although we weren’t able to fully exploit that performance potential at Circuit Zolder, this Ferrari is in its element on the closed track, with a nimble chassis that needs little prodding to get off the beaten track. The steering is heavier than late Ferrari models, requiring you to work hard to steer the Daytona from curb to curb.

This is also due to the special arrangement of the program. Although the Ferrari Daytona SP3 has the latest generation of electronically controlled driving aids, the tuning steps are hidden to make the driver feel responsible for holding the reins of this bouncy horse. The same goes for the specially developed Pirelli tires, which slip a little before losing grip. They provide a beautiful driving sensation that awakens your senses.

More than the 296 GTB or even the 812 Competizone, you feel like you’re driving a racing car, not a super fast toy that slides faster than its shadow. The Daytona SP3 is another type of Ferrari that requires a lot of dedication and respect. 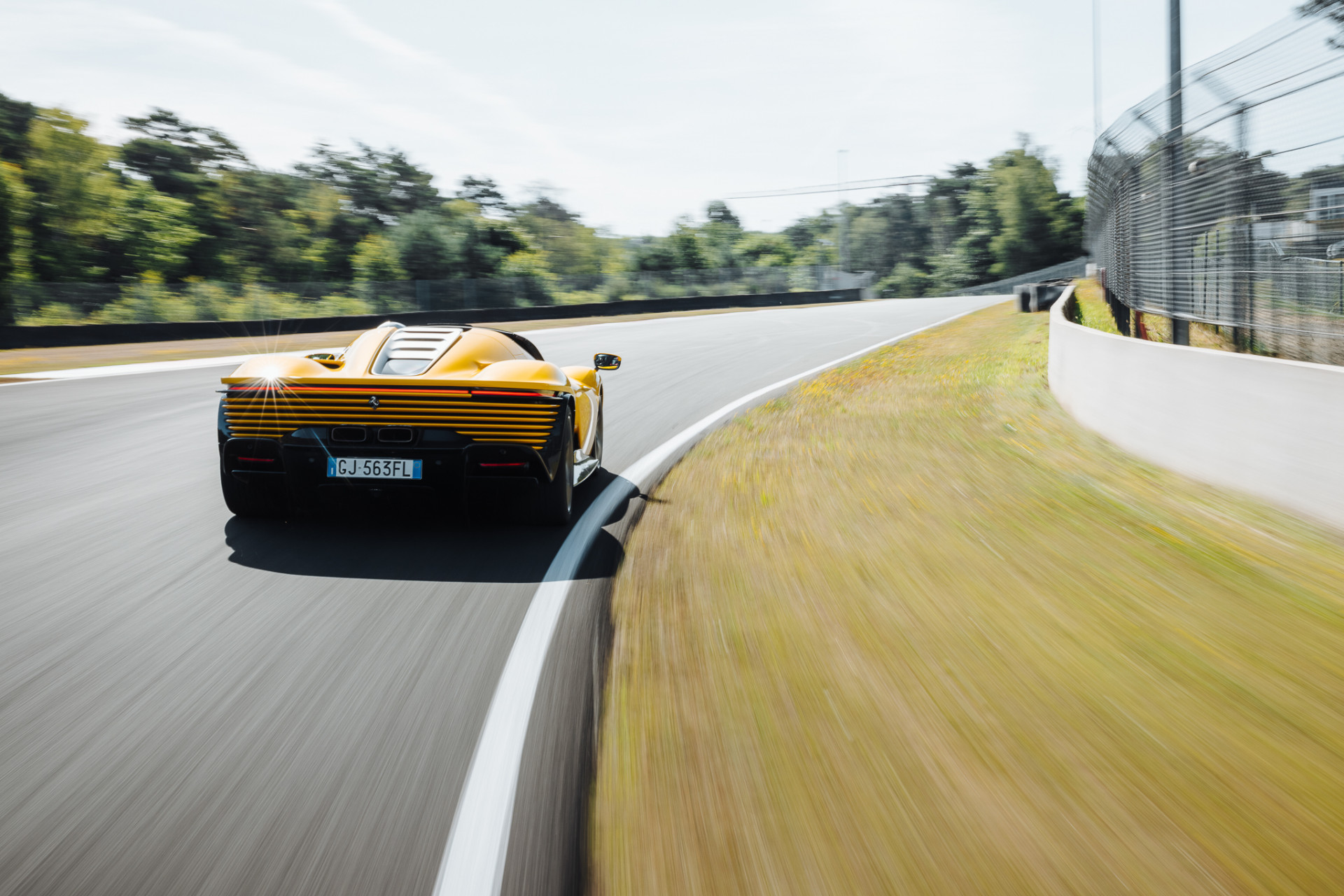 The Ferrari Daytona SP3 is built in a limited edition of 599 copies. Although Maranello is asking around €2 million for each car, all models have now found an owner.

Ferrari first knocked on the door of SP1 or SP2 owners and they all responded positively. The lucky 499 owners who already have a Monza in their garage will soon be able to park a Daytona there. The remaining 100 SP3s will go to Ferraristi who ran out of Monza’s SP1 and SP2 at the time. 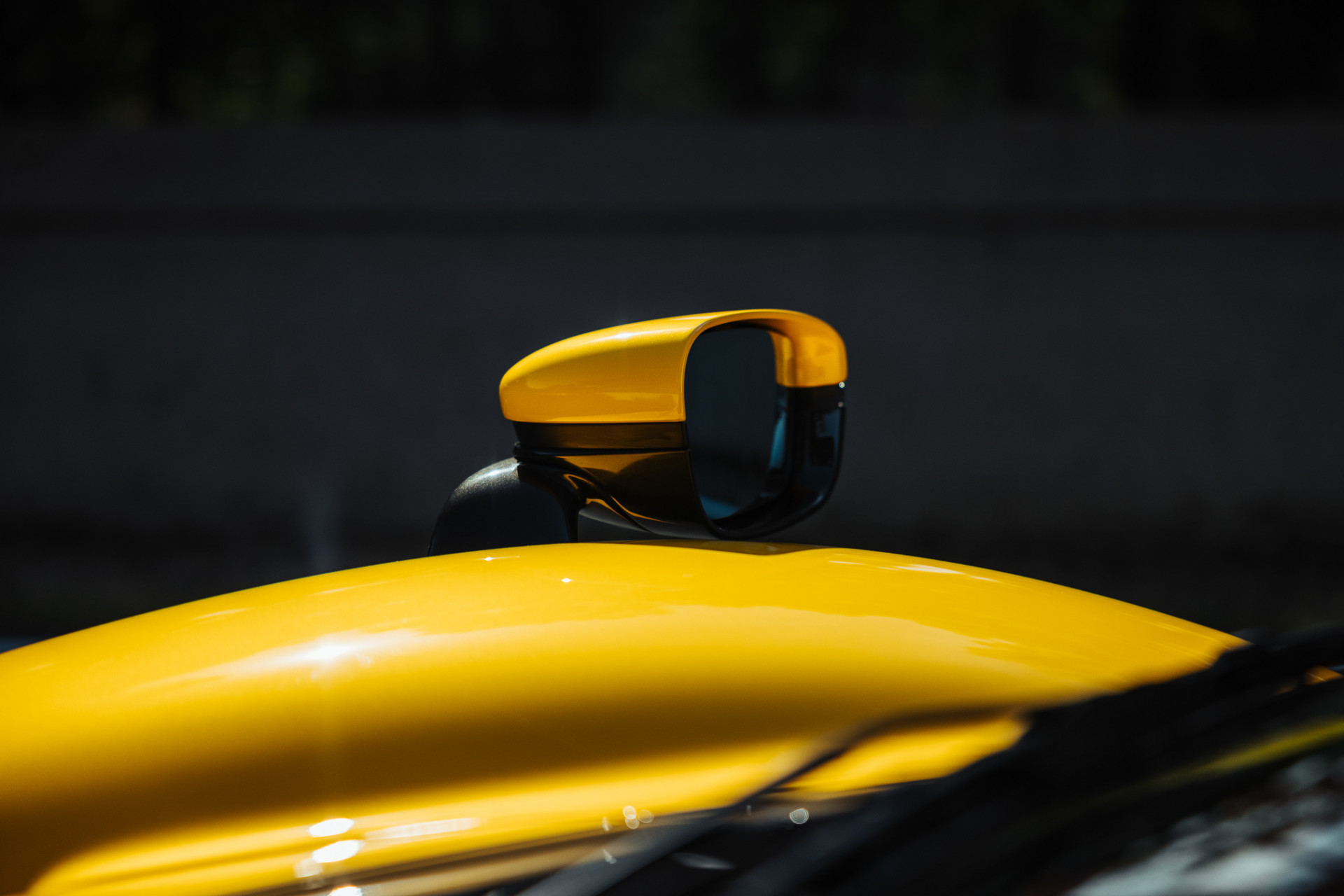 Maranello is now developing plug-in hybrid sports cars, will soon launch an SUV and is testing all-electric drive technology. But every once in a while, they look in the rearview mirror at all the beauty they’ve created over the past 75 years. And then you have a masterpiece like this Ferrari Daytona SP3.

Volkswagen SP, a car loved and adored for 50 years

This ‘leather’ Ferrari shows that even the Swiss have bad taste

Alfa Romeo Giulia and Stelvio 2022: a new version of the Veloce