A Volvo C40 recharging the battery at the Cajati gas station, between São Paulo and Curitiba

It’s been a year since Volvo announced that it will sell only electric cars in Brazil, becoming the first brand to ditch the combustion engine in its models. Selling cars of this type since 2018 – first it had the XC90 Plug-in Hybrid -, the Swedish manufacturer has already installed more than a thousand current (AC) charging stations here.

Now, it begins to spread direct current (DC) devices on the highway, which speeds up charging.

“At that time we needed to design hybrid models, which in the city are generally powered by electricity and on the road use their gasoline engines. Today, with the expansion of 100 percent electric, we need more powerful chargers to serve these vehicles on the highway” , explained João Oliveira, director of Operations and Innovation at Volvo Car Brasil, to Forbes. 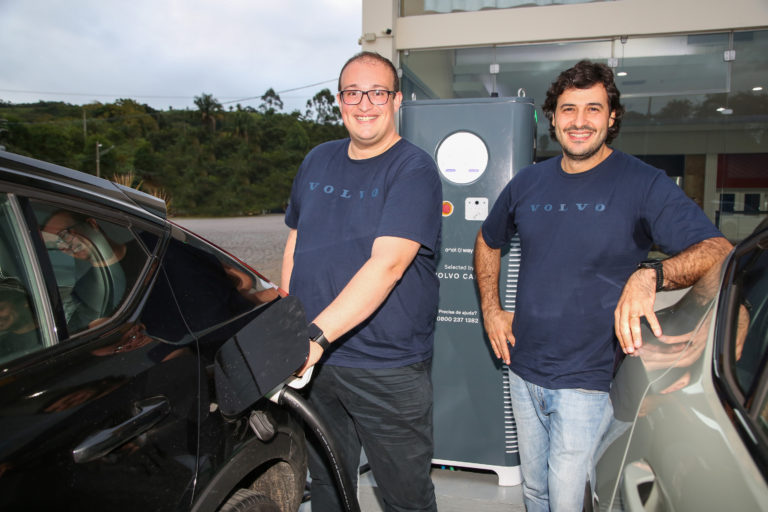 The first of these new charging stations was installed about two weeks ago on the highway Régis Bittencourt, in the São Paulo municipality of Cajati, more than 230 km from the capital, thus facilitating the journey to Curitiba (PR). With a capacity of 150 kWh, it is capable of recharging an electric XC40 in about 45 minutes, according to Volvo.

In June, the second will be collected on the Botucatu section of the Marechal Rondon highway, in the interior of São Paulo. “We send the equipment there and deal with the procedures to make the energy available to the local worker”, explains Oliveira.

The first phase of the expansion of DC facilities will also include the cities of São Carlos, Penápolis, Avaré, São Sebastião, Ubatuba, Taubaté, Cubatão, Jacareí and Leme; and mining companies Oliveira and Pouso Alegre. There will be a total of 13 units, covering 3,250 kilometers connecting the capitals of Paraná, Rio de Janeiro, São Paulo and Minas Gerais. Each of the points will be able to charge two cars at the same time.

Volvo is still studying whether the next of the remaining four stages — which will begin in the second half of the year — will cover the Northeast or the Midwest.

“We broke the expansion into phases not for access to resources, but for learning. Once the first phase is completed, we will understand consumer behavior and from there we will confirm our strategy, replicate what we have already done or adjust for the next phase”, he explains Oliveira.

The executive also revealed to Forbes that crossing over to battery autonomy specifications and a map of pre-installed charging stations is key to the expansion.

“In Registro, for example, there is a Volkswagen charger. I will not install another one there because it will not benefit the user at all. In that sense, there is no competition. The more the design, the better it is for the user, who will feel more comfortable using the technology”, he reflects.

What counts in the race for power stations is brand reinforcement. Therefore, the equipment, built and installed by companies in the energy sector, has the mark of this or the manufacturer. Volvo’s appear in Waze as “Volvo Fast Charge Electropost”.

The five stages, which will include between 13 and 15 charging stations each, will be completed in three years, calculates the director of Volvo.

During the opening of the Cajati fast charger, Luis Rezende, president of Volvo Car Brasil, warned: “this is just the beginning. Our plan is very bold and comprehensive, we will install fast chargers throughout Brazil to allow interstate and interstate travel for electric vehicle owners. And that applies to customers of Volvo and other brands.

Volvo is adding charging stations with fast chargers across the country

Electric, the Volvo C40 is an attractive, well-equipped SUV coupe that arrives in Brazil for R$ 420 thousand | versions

Volvo begins installation of its electric vehicle charging network in Brazil; free for all

A Brazilian pays R$ 6.2 million for the most expensive SUV in the world, the Rolls-Royce Cullinan Black Badge | cars

Lamborghini is bringing another Aventador Ultimae coupe to India