More than 200,000 Americans have ordered an electric version of the F-150 pickup, the best-selling vehicle of all types in the United States. The craze is so strong that the manufacturer had to find ways to push the walls and triple its production capacity in a few months. Without managing to reduce delivery times to a reasonable level. Can the Ford Transit – Europe’s best-selling car – expect similar success?

The Transit electrification is an opportunity for a comprehensive overhaul of its design and layout.

In the Ford Transit family, there has already been a variant with a 100% electric engine for a year. But this E-Transit there (already sold more than 8,300 copies in the United States and Europe) is a huge beast, with a total weight authority in charge that goes from 3.5 tons to 4.25 tons, for 1,758 kg of useful load. While the Ford E-Transit Custom that was launched with much fanfare on September 8 weighs only 1,100 kg. Less bulky, its body still has the capacity to house 5.8 to 9 m3 of goods.

Another major difference, where the E-Transit battery swaps with the existing body, the unique E-Transit Custom body strives bend to the battery contour, optimized for form as much as capacity. The floor is designed as closely as possible, tight like “vacuum plastic packaging”, explains Ted Cannis, Director of Ford Pro. As a result, it is lower than that of the current Transit Custom with a diesel engine. Work that contributes to reducing the overall height of the vehicle to less than 2 meters, to facilitate access to the underground car parks.

With its 74 kWh battery, the E-Transit Custom surpasses the Renault Master ZE with its 52 kWh.

The launch of the Ford E-Transit Custom is an opportunity for the new Ford Pro organization to highlight a range of connected services, which are vital in supporting business customers in their transition to electric mobility. “We advise you in defining the number of stations and charging power to be installed”, says Ted Cannis.

Whether fleet managers or technicians, Ford Transit supporters betray their concerns. “Ford Transit users have told us about their fear of running out of power and wasting time at charging stations,” says Usha Raghavachari, Director of the innovation lab. Therefore the choice of a battery with a large useful capacity, which 74 kWh must ensure official limit of 380 km (WLTP cycle). This is more or less four times the distance the average European car driver travels each day. The Renault Master ZE with a 52 kWh battery can hope to reach 190 km on the combined cycle, or 244 km maximum in the city.

The Ford E-Transit Custom’s lithium-ion battery pocket cells are borrowed from its American cousin, the Ford F-150 Electric. They have an energy density 12% higher than that of E-Transit cylindrical cells. Proof that things are changing fast when it comes to electric vehicles.

Connected to a 125 kW fast charger, the 400 volt battery gets a full charge. from 15% to 80% in 41 minutes. Hard time to enjoy his lunch break. On the other hand, it takes 7.8 hours on a household power station, via the Ford E-Transit Custom on-board charger (11 kW on AC). Needless to say, fleet managers and drivers can view the battery charge level and declared range remotely (on a computer or smartphone).

Ford E-Transit Custom is a mobile office, customized according to customer preferences

The discovery is puzzling for an electric vehicle as expected as the Ford E-Transit Custom. However, it is a safe bet that the performance of its battery and its motorization (choice of 100 kW or 160 kW, ie 136 horses or 218 horses) will make the impression to be less intelligent and the importance of fittings in its cabin.

For once, the presence of the delivery driver will be the envy of the sales representative. Because no luxury sedan or stylish SUV offers steering as smart as the Ford E-Transit Custom. A valve at the very bottom of its mouth is used to hold a laptop wedge or touch pad. Even more powerful, the steering wheel bends flat to accommodate trays and used as a picnic or work table. “This is the interpretation of the need expressed by many of our customers”, affirms Usha Raghavachari. 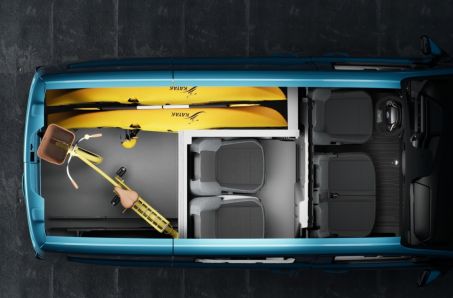 Other equally sensible equipment is intended to include other variants of the Ford Transit, as they seem to make sense. This is the case with the “L-shaped” partition, which leaves room for two passengers behind the driver and two of his neighbors, while strengthening to preserve the full advantage of the maximum loading height (3.45 meters). A simple idea but, again, never seen before.

Ford E-Transit Custom leaves a choice: to drive a regular car or a single pedal

Passenger space is also increased. The length of the overhang has been reduced by bringing the wheels forward, for the immediate benefit of space on board. The Ford E-Transit Custom boasts a flat floor, as well as a clutter-free dashboard (the parking brakes and gear selector are electrically controlled). Even the steering wheel makes an effort to insert into the stomach: the planned contour of its lip facilitates the installation of the driver. Finally, the great need for storage space is pushing a safety cushion to move from the dashboard to the ceiling. A trick that appeared in 2014 on the Citroen C4 Cactus. 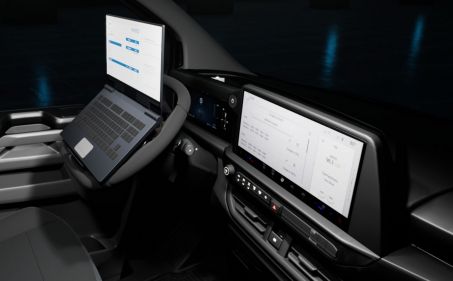 The trick is not only structural: artificial intelligence is also used. For example, as soon as the transmission shifts to P (parking), the “Delivery Assistant” turns on the hazard warning lights, rolls down the windows and locks the driver’s door as soon as he gets out. “When you know that a delivery person gets in and out of the car up to 200 times a day, this saving of a few seconds ends up making all the difference”, summarizes Usha Raghavachari. Another convenient time saver, the end of the hunt for keys: “There is no need to have copies made. The car owner can send a temporary digital key to the smartphone of his employees.” 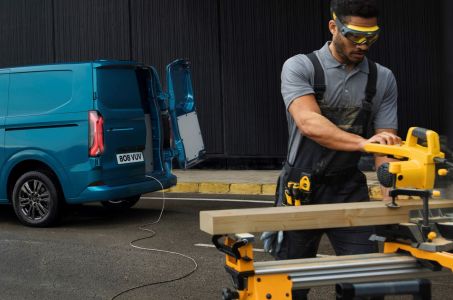 The Ford E-Transit Custom will be gathered from autumn 2023 at the Ford Otosan plant in Kocaeli, Turkey. Prices have not been disclosed. As always, the manufacturer with the Blue Oval has chosen to reveal its car very early, “to give its future customers time to understand its advantages and prepare for their switch to electricity by installing charging stations”, justifies Ted Cannis.

We bet that the competition will take advantage of this time to respond and adopt better batteries. This is all that the non-governmental organization T&E wants, which has calculated that putting one million electric commercial vehicles on Europe’s roads in five years will reduce CO2 emissions by 5.6 million tonnes in 2027, equivalent to the total annual pollution of Spanish cars. It’s nothing.

Bugatti presents the first Chiron Super Sport to its customers

5 Ford cars that are still sold in Brazil

Ford launches an electric car with 2,000 hp and reaches 100 kilometers per hour in less than 2 seconds | Electric and Hybrid

The connected ball will make it easier to detect the offside