Until now, they had only disclosed the unique equipment and costs of the components that would be used to outfit the bodywork of the Romanian brand’s most significant models, as well as drawings of the tuning exercise. However, the Dacia Duster by PRIOR Design is now a reality, and you can already see how the Romanian SUV’s new widebody will appear.

PRIOR Design is used to producing custom kits for the most sporty and luxury automobiles on the market, which is why they stunned us last year with an extraordinary move. Daring with one of the market’s best-selling cars, the Dacia Duster. The Romanian has never distilled sportsmanship; it is not one of his characteristics, nor was it the low-cost manufacturer’s objective. However, German tuning professionals believed that it was possible.

Indeed, they have devoted themselves, since the announcement of the construction of the “widebody” for the Romanian brand’s SUV, to demonstrating the most aggressive outcome via a series of renderings. A project that is already a reality, as seen by the video and photographs below. And there is no question that the end outcome will astound you, just as it would if you discovered it on the street since it will really shatter necks. 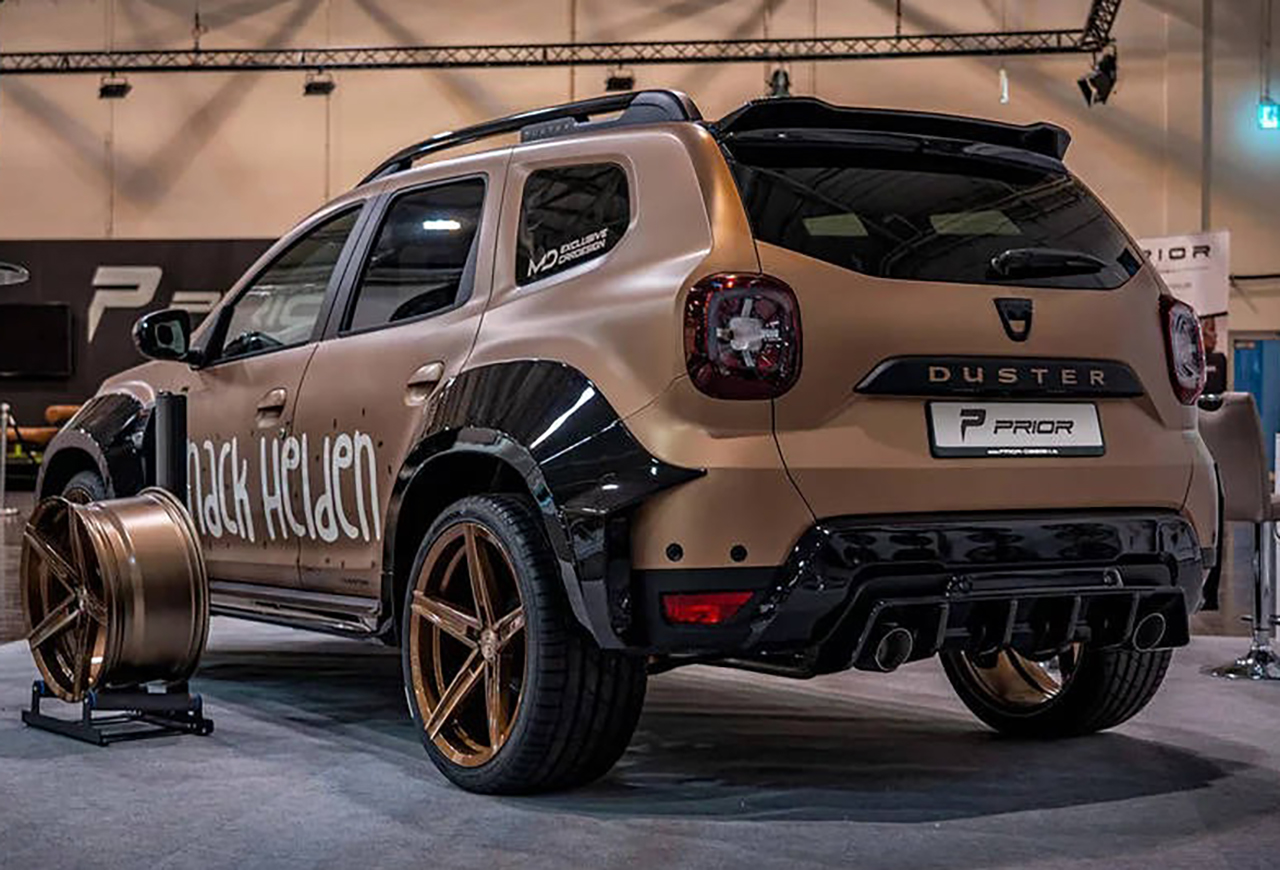 A body package that significantly widens the bodywork and extends the wheel arches from the side skirts to the rear. All of this is finished in glossy black, as are other elements such as the rear spoiler. Also, the equipment includes new gold-painted alloy wheels with a star pattern. The Duster’s rear end has a big aerodynamic diffuser and two massive tailpipes that are far larger than the standard diameter of the Dacia series production vehicle.

PRIOR Design has made no mention of incompatibility with mechanical variants, implying that the package is compatible with all available. A package constructed of the standard lightweight fiberglass reinforced plastic material called “DuraFlex,” which is more flexible than traditional fiberglass but also provides a cleaner, smoother surface that is simpler to paint in the customer’s desired color.

Thus, if you’re interested in this package, which transforms the Duster into one of the most aggressive SUVs on the market and in its class, you’ll need to shell out just under 3,300 Euros. Naturally, with the widebody, bear in mind that the Duster will lose all dynamic capability off the tarmac, as the package also includes a significant drop in the height of the bodywork to the ground, bringing the chassis almost to the asphalt.

The modification features fender flares connected by side sills, a spoiler placed above the tailgate, and parts that effectively conceal themselves behind the stock bumpers. You’ve guessed it: this new low-bitumen layout encourages more on the tarmac of a circuit – or at the very least of a smooth road – than venturing off the bitumen, where this Dacia Duster on anabolic steroids is certain to leave some feathers.

Wing extensions are not made of lace. Also, take note of the imposing size of Prior Design’s forged rims. By contrast, the spoiler above the tailgate is almost imperceptible.

The air intake and ground effect insert to complete the look of a set mounted on very big diameter rims. Notably, the latter is painted in gold, a tint that contrasts with the bodywork, and sport a new color and design. 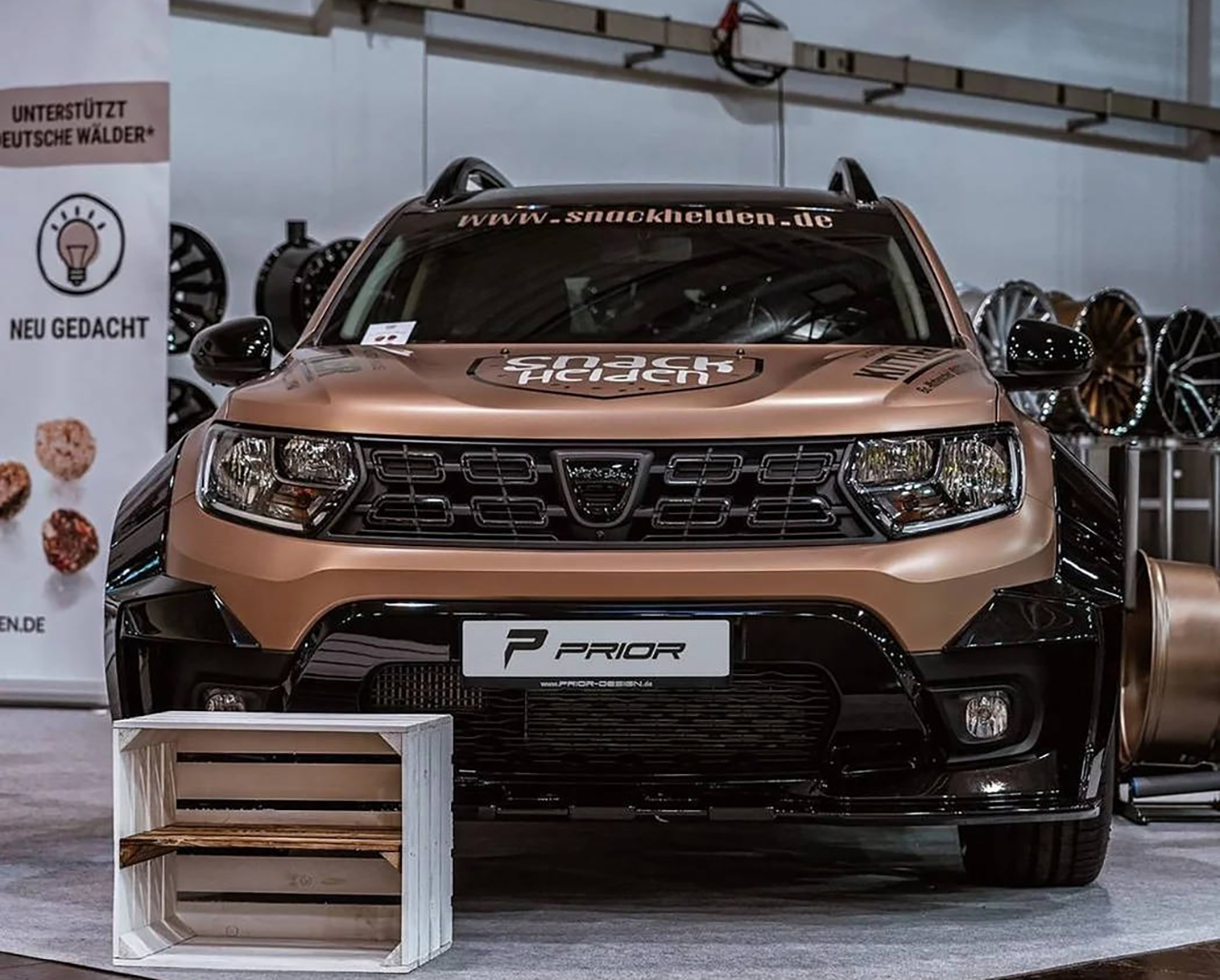 According to the manufacturer, this kit is compatible with all Dacia Duster 2 models and is constructed of so-called DuraFlex fiberglass. According to Prior Design, this material is softer and more flexible than traditional fiberglass. It also has a smoother look, which makes painting simpler and results in a high-quality finish. Enough to elevate your machine to the level of a true star during tuning meetings.

The kit’s front wings include scoops at the corners of the shields, while the middle section is highlighted by a blade.

Previously used to high-end, if not elitist, accomplishments such as the kit that transforms the Audi Coupé into the dramatic RS2 (a metamorphosis restricted for 40 fortunate individuals), Prior Design takes a different tact and targets Romania’s low-cost SUV market. With a suggested retail price of €3,300, this package is not necessarily a cheap kit. Indeed, its pricing is comparable to that of a considerably more luxurious automobile.

The rear bumper is adorned with a diffuser.

The aerodynamic package (four fender extensions, two side sills, a front blade, and a rear insert) for €2,999. Include the roof spoiler for 299 €. However, to complete your Duster in a bodybuilding mode, you’ll need to spend on a pair of forged rims – which may already double your wager –, wide and low-rise tires, and lastly, an exhaust with a larger output diameter. so that the entire does not explode. Finally, the whole cost of the project, including the painting, is comparable to the cost of a new Duster!

what to expect for a low-priced SUV in the future

This UFO that you love so much all the time!

daily, what is the budget champion worth?