Is the electric car equal to the escape and pleasures of cars? To try to answer this double question, we invite you to discover our recent trip to the land of Santa Claus. In Lapland, the Cupra Born and Formentor were tested on cold and snowy roads, especially at the Rovaniemi Driving Centre. There, another powerful surprise awaited us…

The Seat and Cupra brands love the far north. In 2017, we had the pleasure of driving the Ateca FR SUV on the tracks of the 1000 Lakes Rally, the Finnish event of the WRC World Championship. Then, a few months later, it was in a wonderful landscape, that of the Norwegian fjords where we plunged, still with Seat, into a world that is particularly interesting in terms of mobility (discover or rediscover by clicking on the image below). Now go to Lapland in Cupra Born VZ and Cupra Formentor VZ5.

In Lapland, so it was on the snowy “playground” that we had the pleasure of driving the 390 hp Cupra Formentor VZ5 SUV and the 100% electric Cupra Born. Note that, without humor, for those who do not tolerate the cold and who would prefer it, our recent test of an electric sports sedan (150 kW/204 hp version) conducted in the south of France is available by clicking. : Cupra Born: sports “wattée”, experiments. 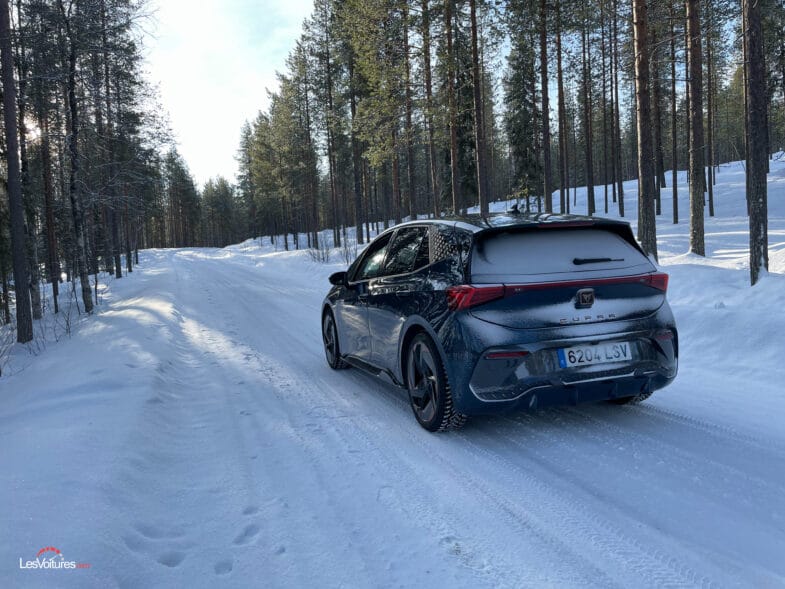 Let’s start our trip to Lapland in peace at the wheel of the Cupra Born thanks to a car trip that we are not ready to forget. This time, it was at the controls of the more powerful 170 kW/231 hp Born VZ that we faced the snowy slopes of Lapland. 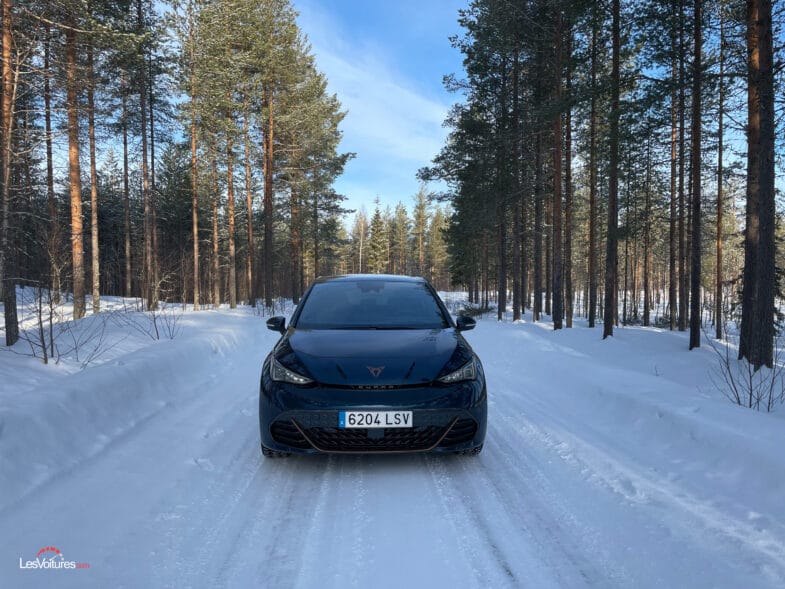 Let’s admit that, almost in the middle of nowhere, we were quickly assured by the ability of the Cupra Born to move among the Siberian pines, spruces and birches that mainly make up the forests of Lapland. 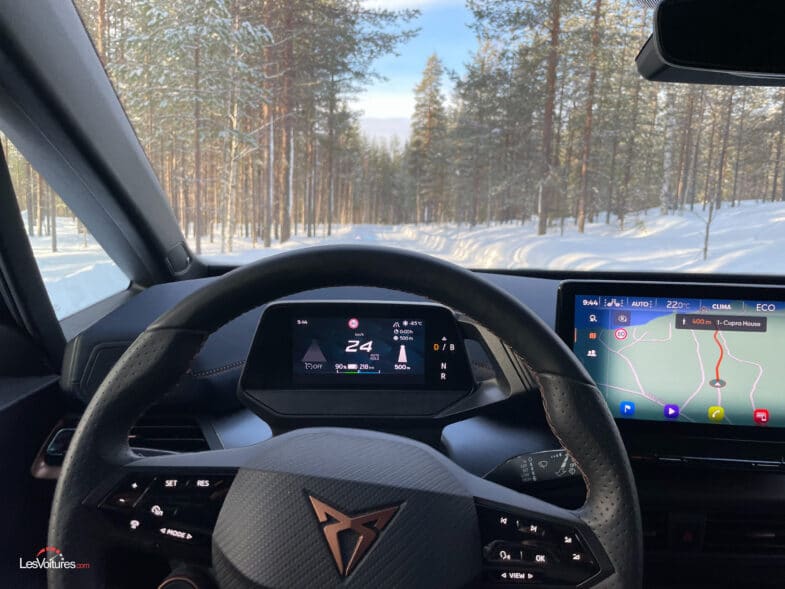 Indeed, Cupra Born is its weight (about 1,700 kg). However, electric vehicles are known to be optimized in terms of mass distribution, their center of gravity being, as such, very low. 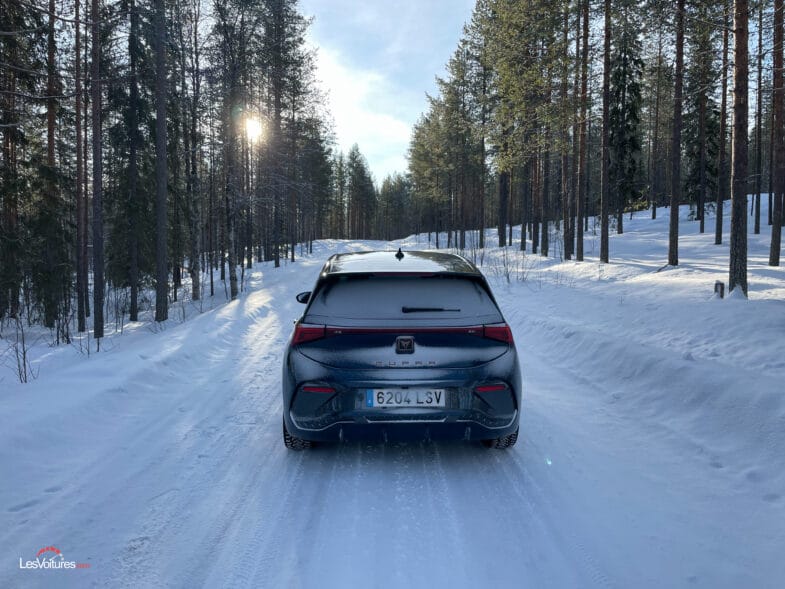 On snow, Cupra Born thus assures its driver by providing a certain balance. Note that this “battery powered” sedan is a cousin of the Volkswagen ID.3. Beyond its attractive design, the Cupra Born has undergone many improvements compared to the ID.3: a weight distribution of almost 50/50, the addition of large brake discs, front and rear axles of Born that are 15 and 10 mm lower. thanks to special shock absorbers. In addition, there is a modified camber of the front wheels, the wish for a solid front suspension and, above all, a DCC controlled suspension (optional) for the Born VZ. The result: we did not expect this level of agility from the Cupra Born VZ in the snow. 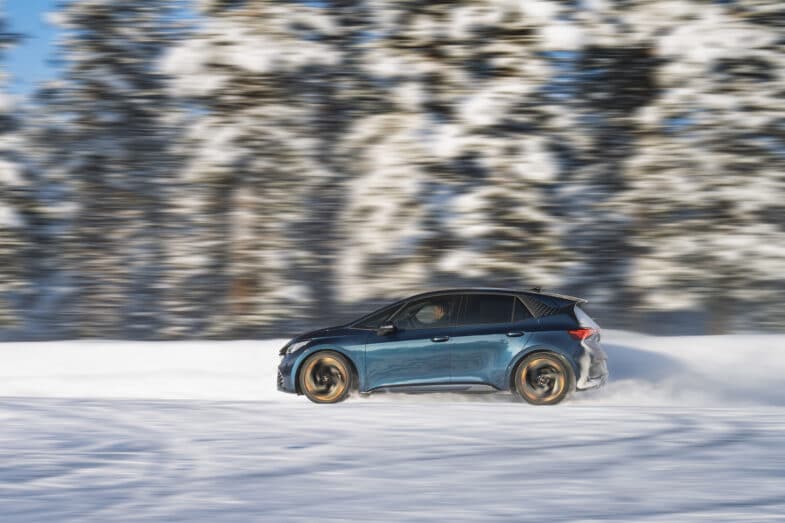 The Born literally ripped through the snow, especially in curves, allowing for controlled slides. Note that our test Cupra Born VZ had flat tires during our road trip in Lapland. To conclude on the Cupra Born VZ, it must be noted that its maximum power of 170 kW / 231 hp is temporarily released thanks to a device called “e-boost”. 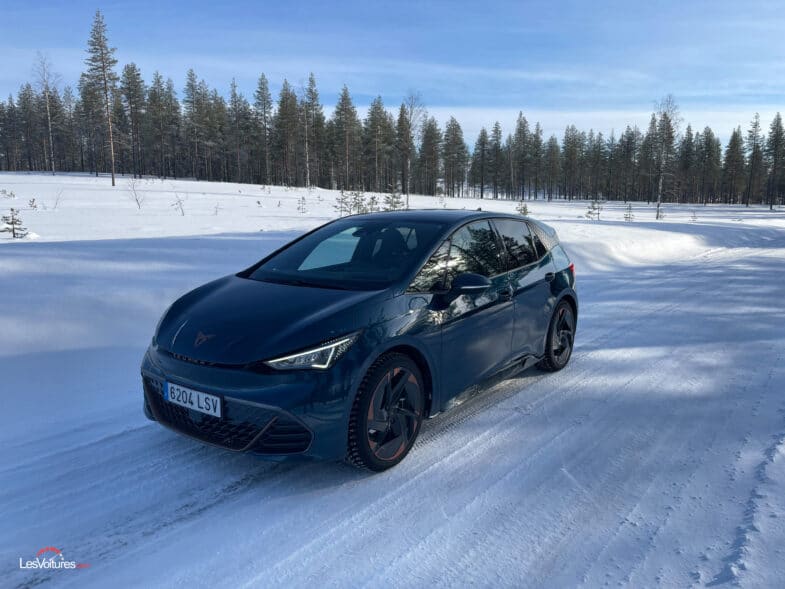 On the ice circuit of Rovaniemi, we were able to confirm this sense of balance felt at the wheel of the Cupra Born VZ by passing as close as possible to the snow walls! Andros e-Trophy pilots just have to watch. 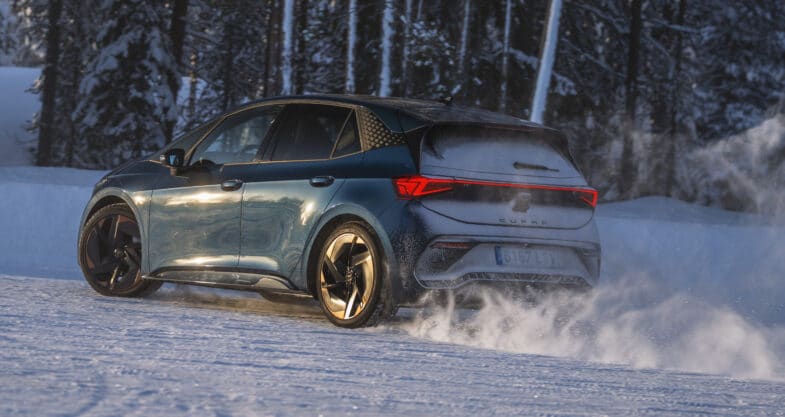 Let’s move on to the Formentor VZ5 SUV powered by Audi’s original 2.5 l 5-cylinder turbo petrol engine coupled with a DSG7 gearbox that manages to produce 390 horsepower and 490 Nm of torque, all sent to the four wheels through a standard transmission. of 4Drive. 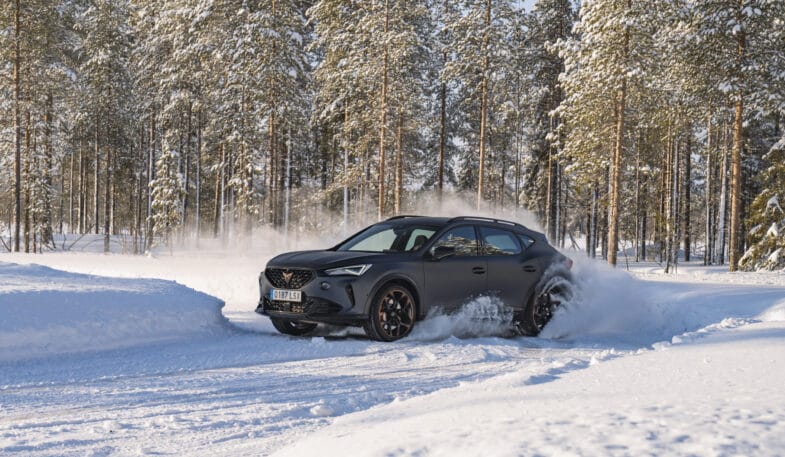 In other figures, those of performance, this gives 0 to 100 km / h achieved in 4.2 s and the maximum speed is limited to 250 km / h. However, on the snow, what impressed us the most was the “Drift” mode available on the SUV, which adds incredible fun on the snow. 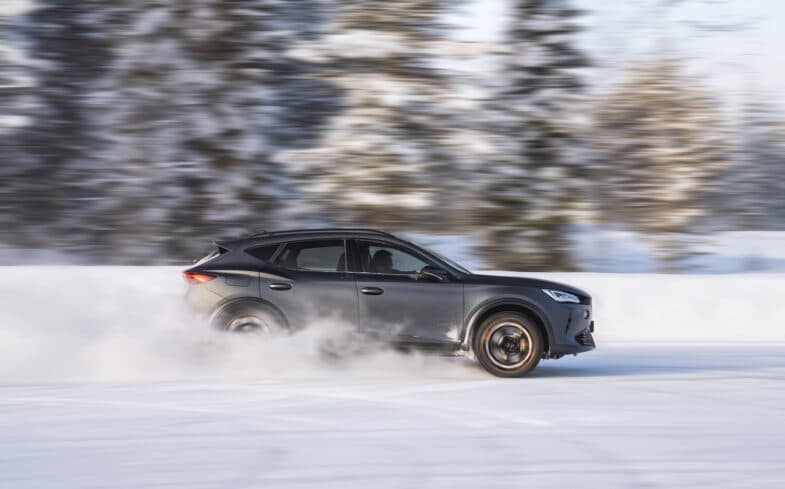 Well planted on the marked ball, the Formentor VZ5 has not failed in its sports philosophy set by Curpra, quite the opposite. However, it is important to take into account the heavy weight of the SUV, of the order of 1,700 kg, as well as its higher center of gravity than the Cupra Born. 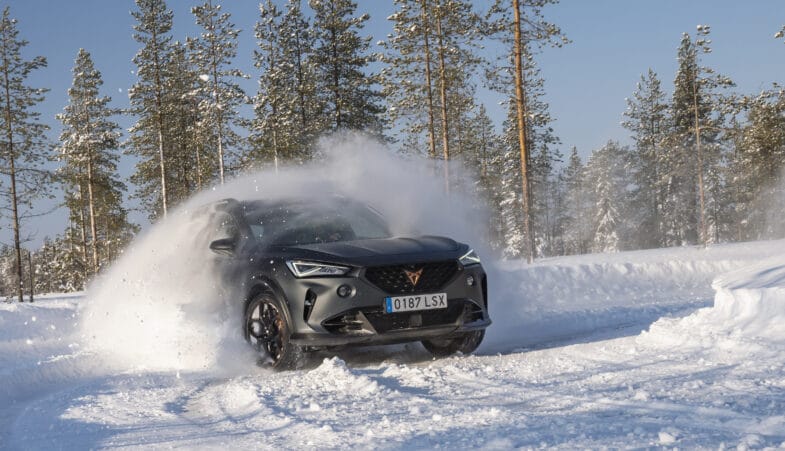 But it’s nice to enjoy a warm engine in the snow. The 5-cylinder 2.5 l turbo is impressively generous. We would have appreciated a more pronounced exhaust note, but the sporty vibes are really delivered at the wheel of this stunning SUV. “Drift” mode is engaged, we control the slope of the rear axle with ease. Let’s measure our words a little because it took us several attempts before we started the SUV on ice. 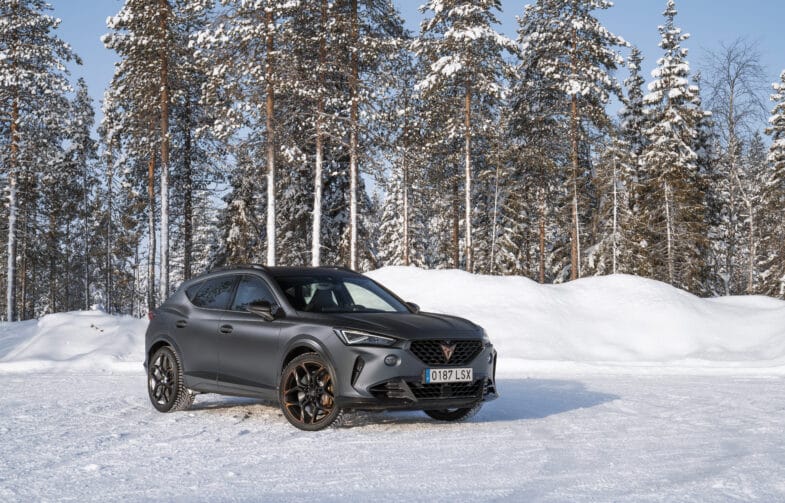 Even if it is only on the track of the Rovaniemi Driving Center that it is possible to take advantage of such a machine on ice, the Formentor VZ5 will, of course, be very effective, at home, on the small roads of France. 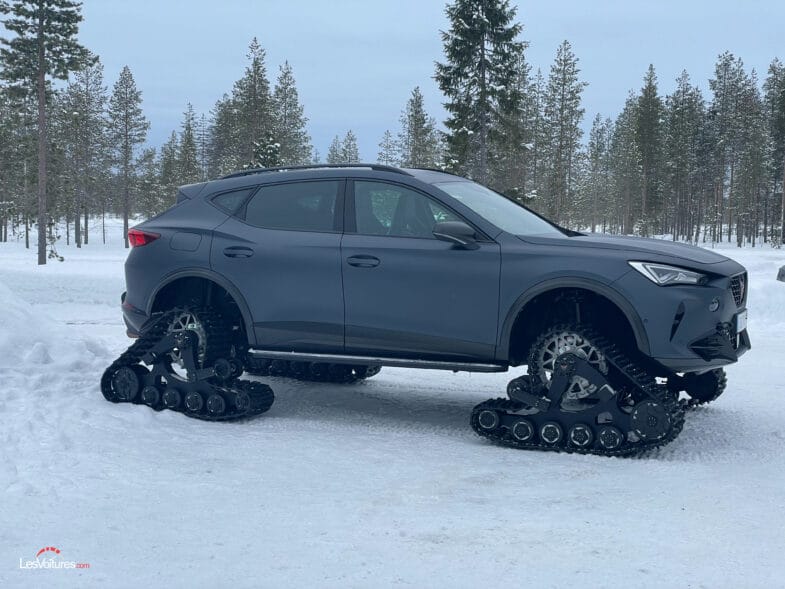 As mentioned in the introduction, “Santa Claus Cupra” gave us a pleasant surprise by presenting, in Lapland, the unusual Formentor VZ5 “Mattracks”, named after a company specialized in the conversion of 4x4s into tracked vehicles. 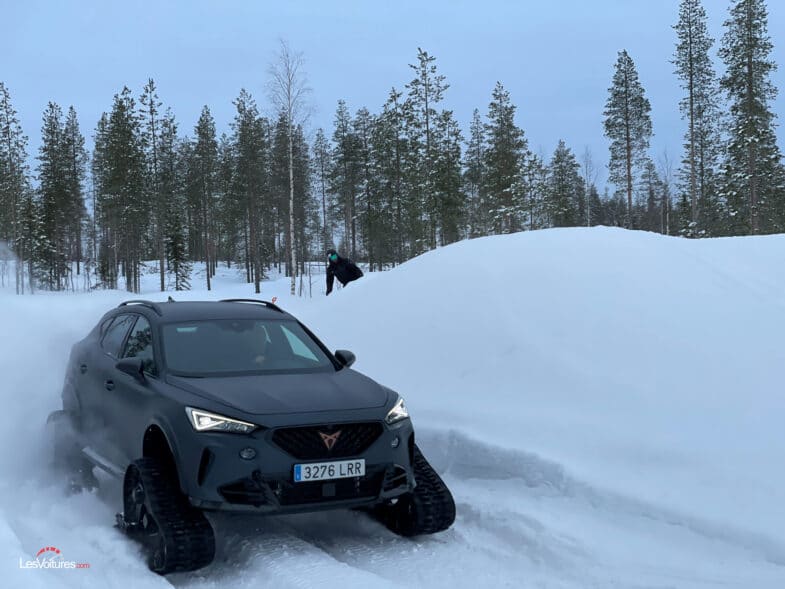 This unique edition worthy of an action film highlights, once again, the fact that the Cupra brand wants to distinguish itself from others by defending, always or still, its philosophy based on a strong identity but, which is not an easy communication to attract new ones. customers. Indeed, the Cupra Formentor VZ5 is a real exciting SUV. As for the 100% electric Cupra Born VZ, it represents a promising first step towards a pure car offer that, year after year, should be improved to offer affordable and very attractive versions. Cupra believes in it, and we believe in Cupra! 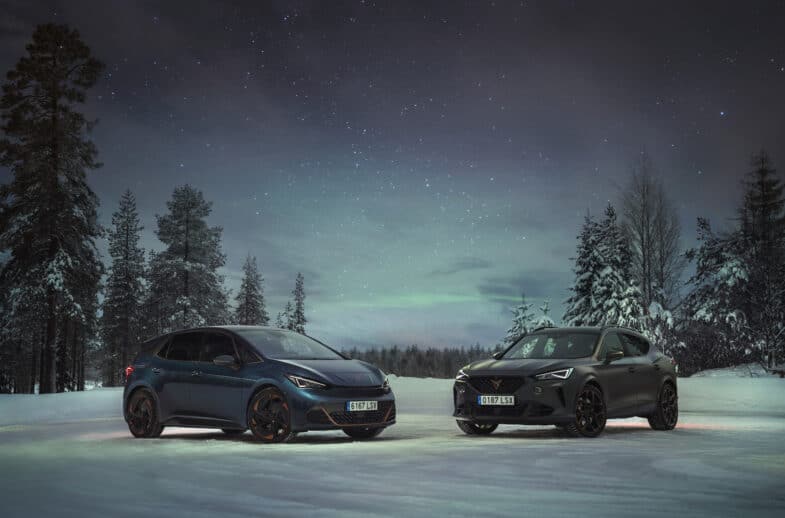 Finally, be aware that the most powerful Cupra Formentor, the VZ5, is a limited series of 7,000 copies that are offered, excluding ecological penalties, from €59,990. Let’s be precise, and the penalty, you have to add €40,000 to the bill! As for the Cupra Born, it is shown from €40,250 in the 150 kW/204 hp version with a battery with a capacity of 58 kWh, knowing that the ecological bonus must be reduced (€6,000). Find below, at the end of this “ice” report, some photos of our trip to Lapland with Cupra 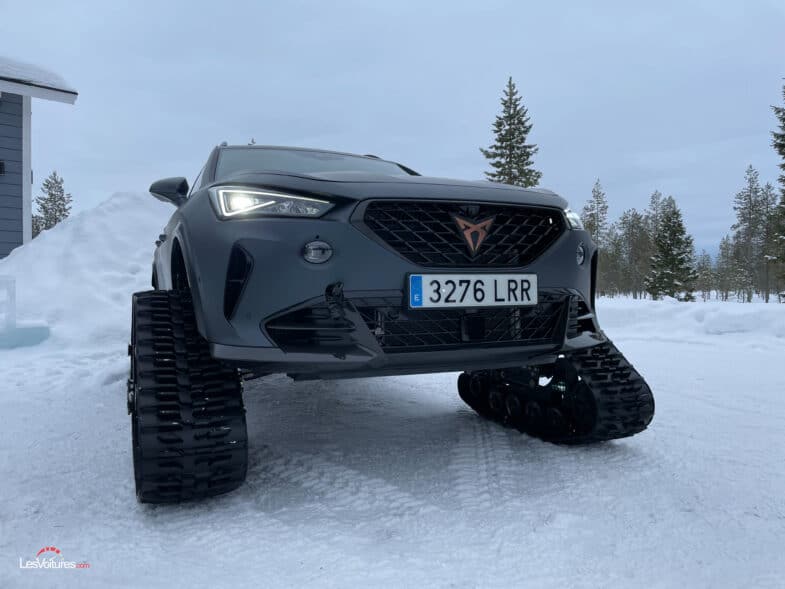 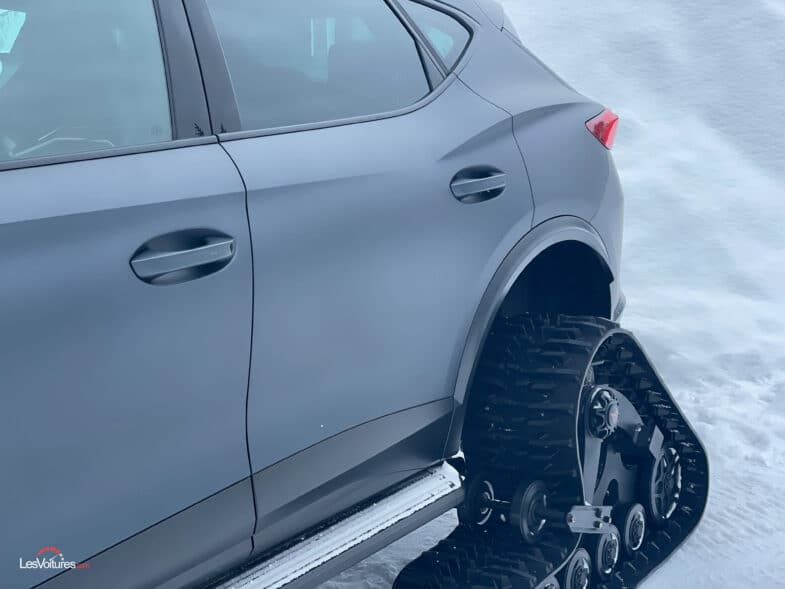 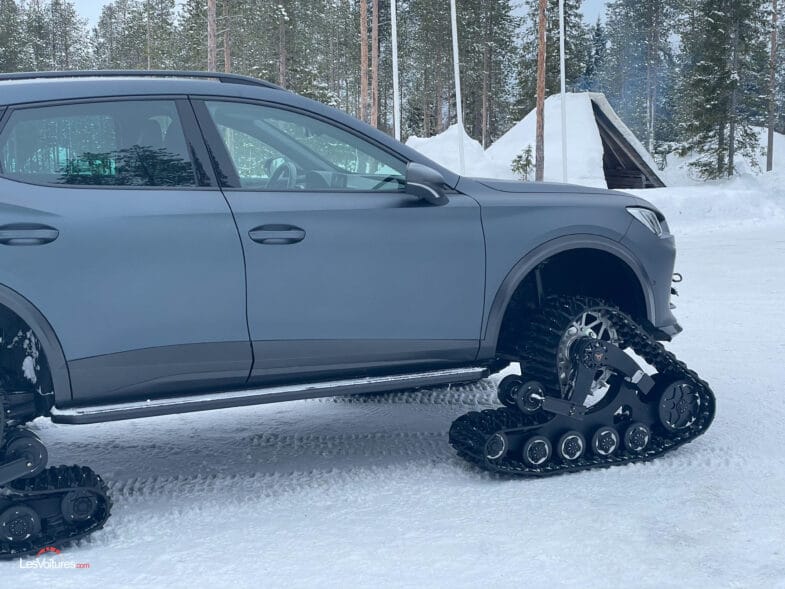 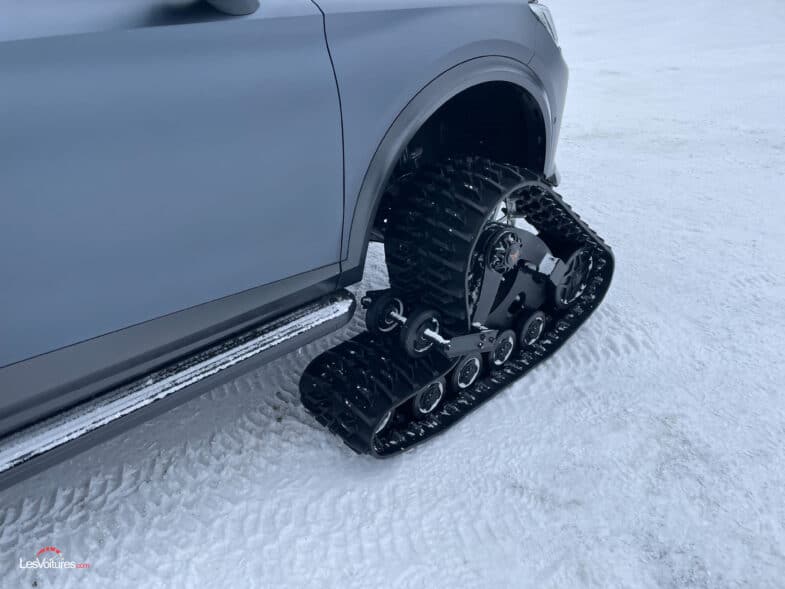 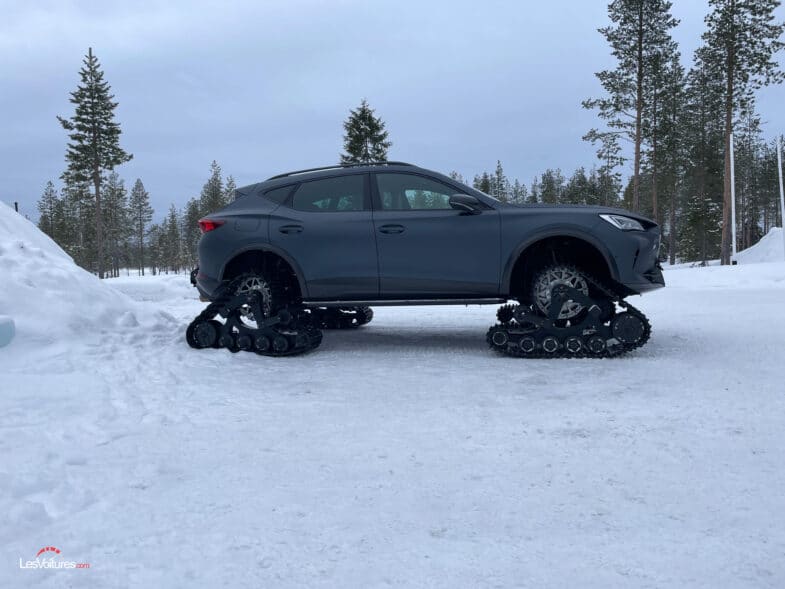 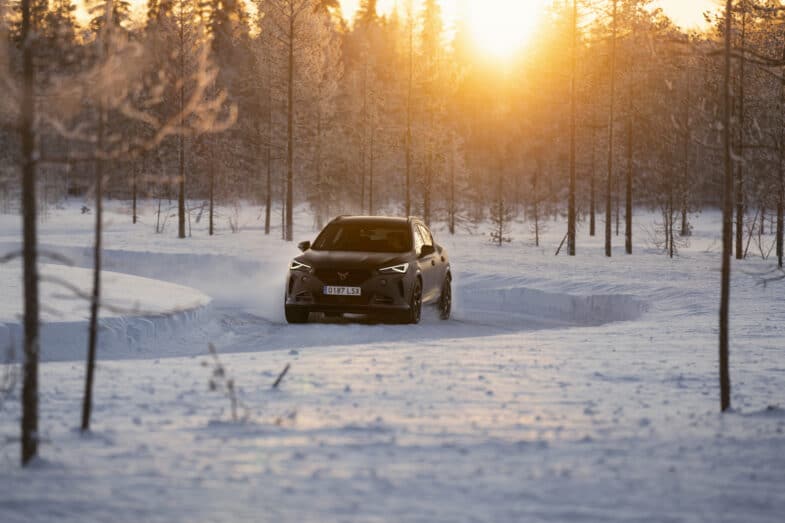 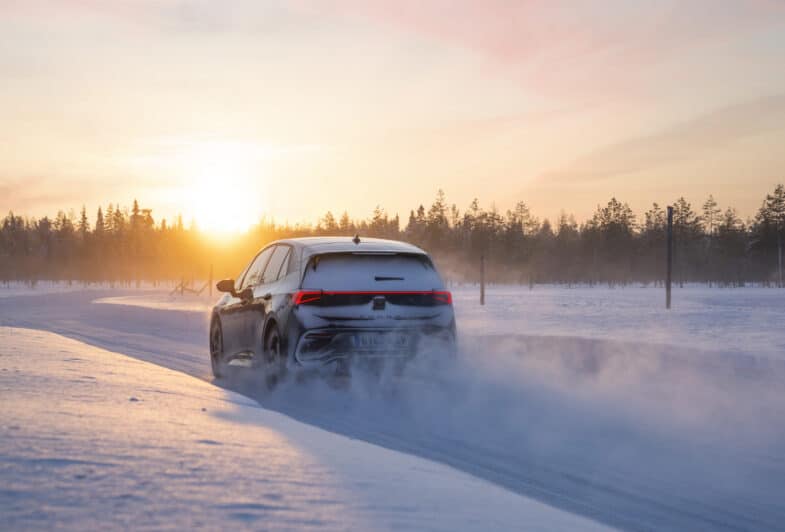 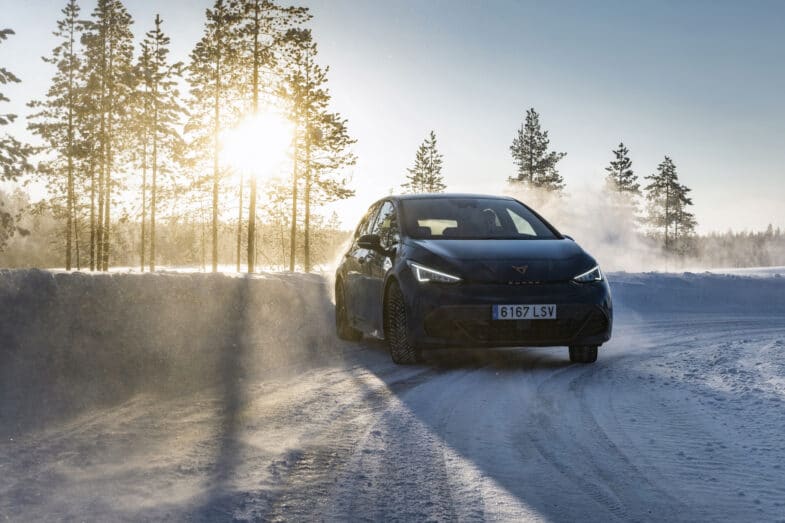 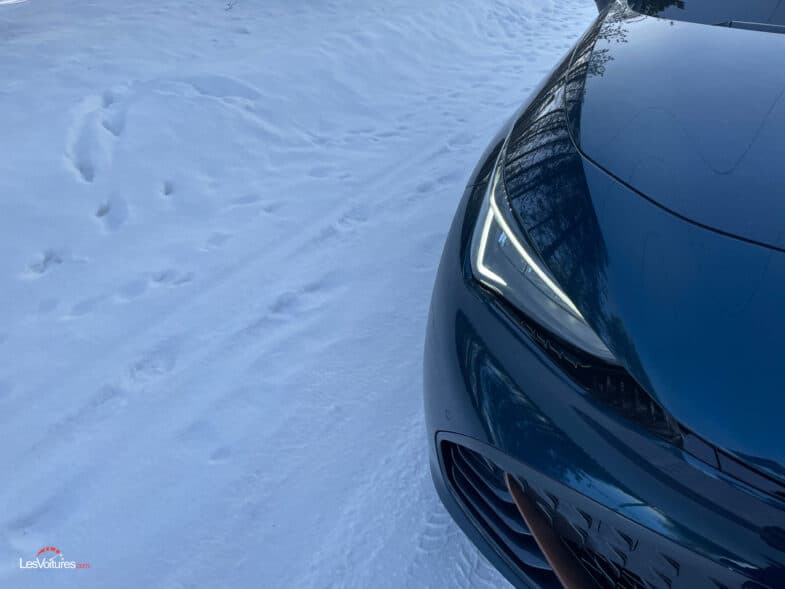 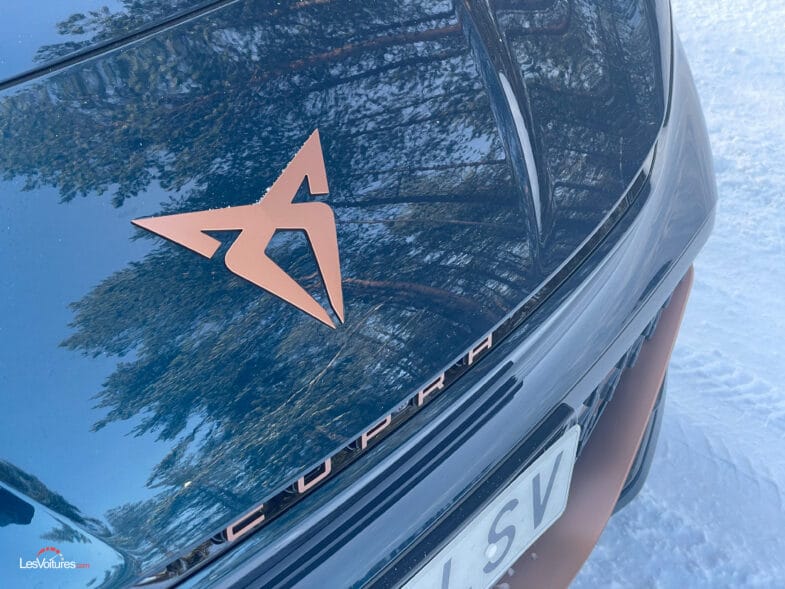 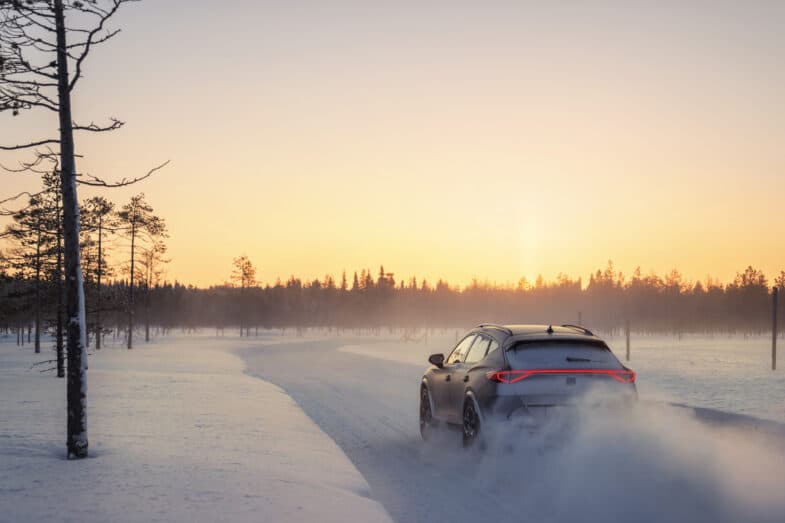 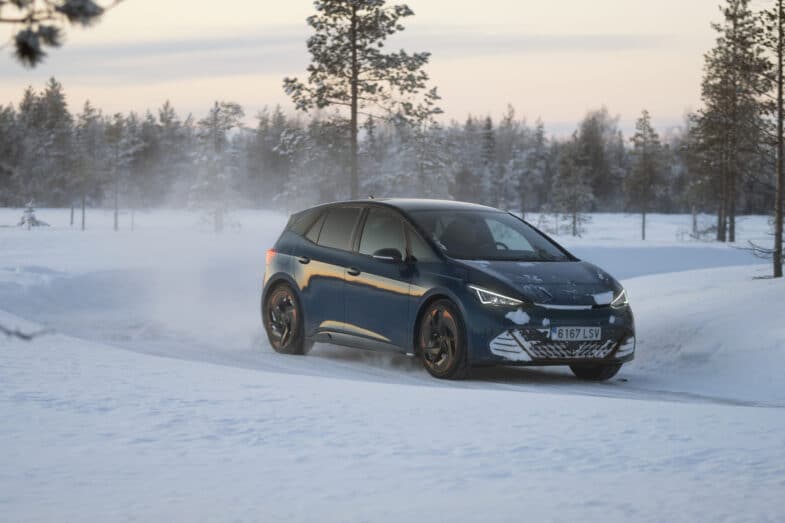 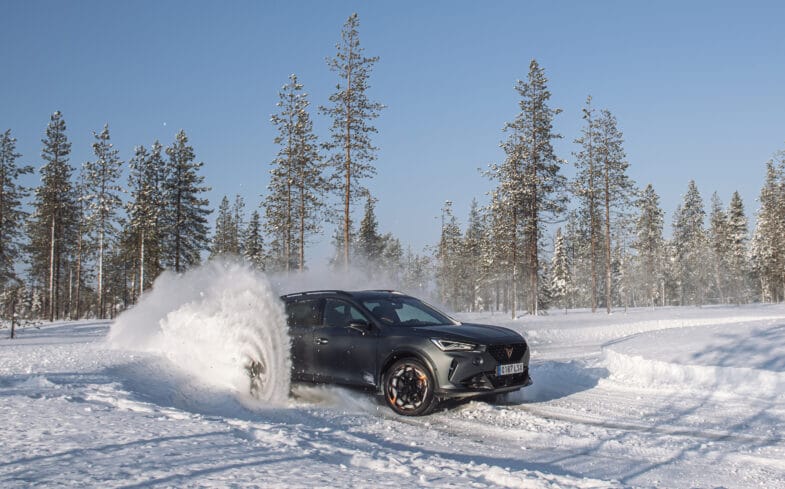 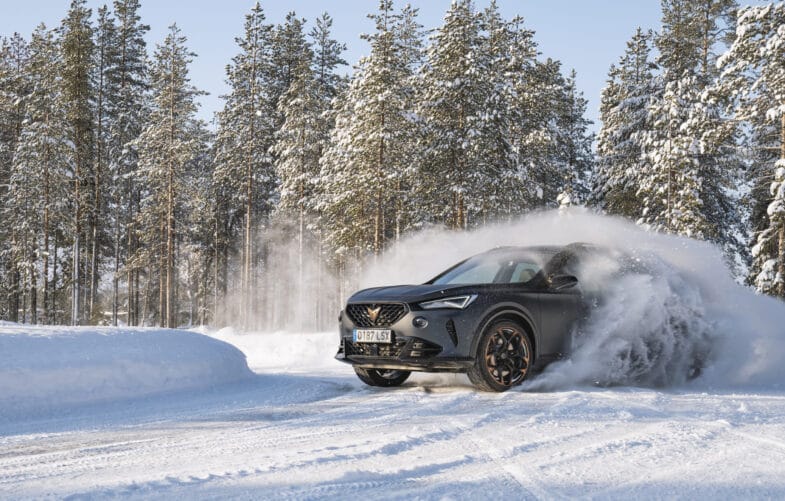 On the road and on the circuit. How much is the supercharged CUPRA Formentor VZ5 worth?

«Vitamin» ABT for Formentor VZ5. The most powerful CUPRA ever with 450 hp

CUPRA Formentor VZ5. The “safety car” of the DTM

see 5 contributions from the game