Alpine’s first, and so far only, model debuts in a limited edition. The Alpine A110 takes a more exotic approach, inspired by the vibrant hues of Ocean Drive and created to commemorate the debut of the Formula 1 team that will compete in the Miami Grand Prix for the first time.

The Miami Formula 1 Grand Prix will take place in just a few days, and it will be a very memorable occasion for the French team since it will be the squad’s first visit to American territory. A fascinating market for sports automobiles, but one in which the French are absent. Nonetheless, the French company will transfer a number of units of what is now the company’s lone model on the market.

A transatlantic premiere that will be marked by the introduction of the new limited-edition Alpine A110 South Beach Colorway. The sports vehicle is provided in two distinct and one-of-a-kind colors that were not previously available in the standard palette but were created by the Atelier Alpine department in response to the appealing neon lights that dot the streets of Ocean Drive. The A110’s body is painted in two colors: “Azure Azur” and “Rosa Bruyère,” both of which are complemented with white-painted 18-inch alloy wheels in the “Serac” pattern. 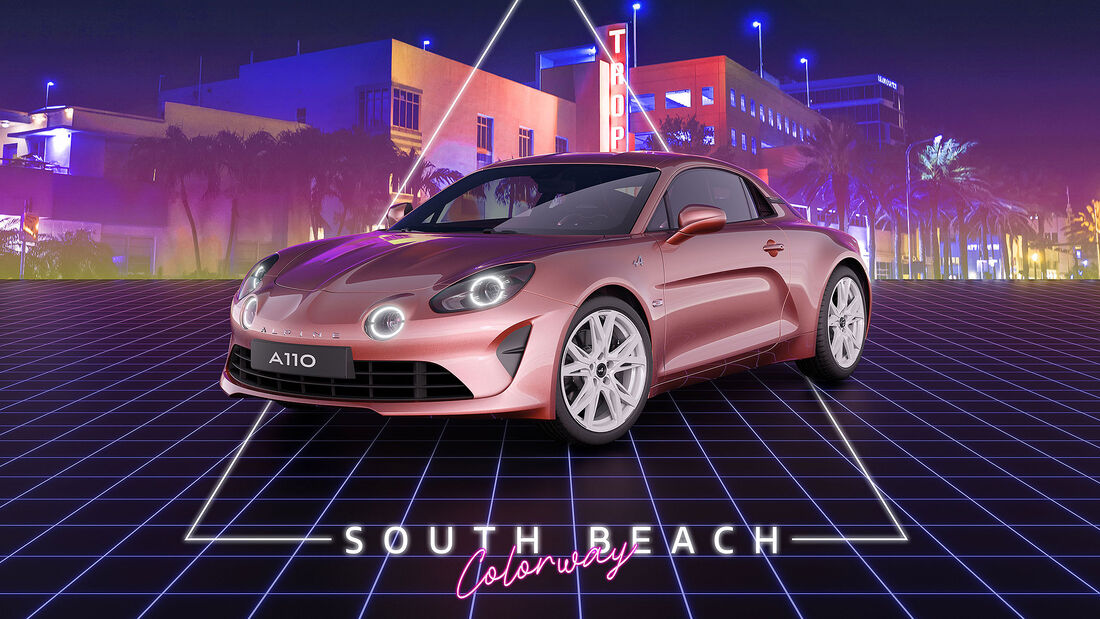 On the exterior, a more daring and dramatic look is achieved by selecting from “Glossy White”, “Glossy Black”, or “Gold” for the alloy wheels and “Light Grey”, “Glossy Red”, “Yellow Bright”, or “Pale Gold” for the brake calipers. Additionally, the inside is very appealing. The Dieppe sports vehicle preserves its current appearance with nostalgic elements, with the dashboard, equipment, and leather and Nappa leather sports seats with suggestive diamond quilting remaining unchanged.

The door panels are painted the same color as the bodywork, with the exception of a distinctive hue in the passenger compartment, which also stands out for specific elements such as the floor mats, which have a unique touch due to the embroidered text “South Beach.” Additionally, light gray contrast stitching is used on the seats and transmission tunnel.

The Alpine A110 South Beach is now available for reserve, but will not be accessible via dealerships. For the time being, it will only be bookable through Alpine‘s mobile app until next summer, when it will be offered as an extra package with the sports model. The French manufacturer will only sell the “South Beach” in conjunction with the A110’s most basic configuration, which has a 1.8 TCe engine with a maximum power output of 252 horsepower for pure pleasure.

The majority of manufacturers have publicly stated their intention to transition from combustion to electric vehicles over the next decade. Alpine has also done so, but, unlike the others, the French have opted out of hybridization, the electrification technology’s middle ground. However, this unique condition does not imply that the Dieppe brand or any of its suppliers or technical consultants have not made their “initial steps” internally.

Indeed, there have been instances. There is an Alpine A110 Hybrid, which was designed by an external consultant who specialized in electrification technology and electrical designs, which is not affiliated with the French sports brand but has collaborated multiple times with the company, as well as with the Rombo brand. 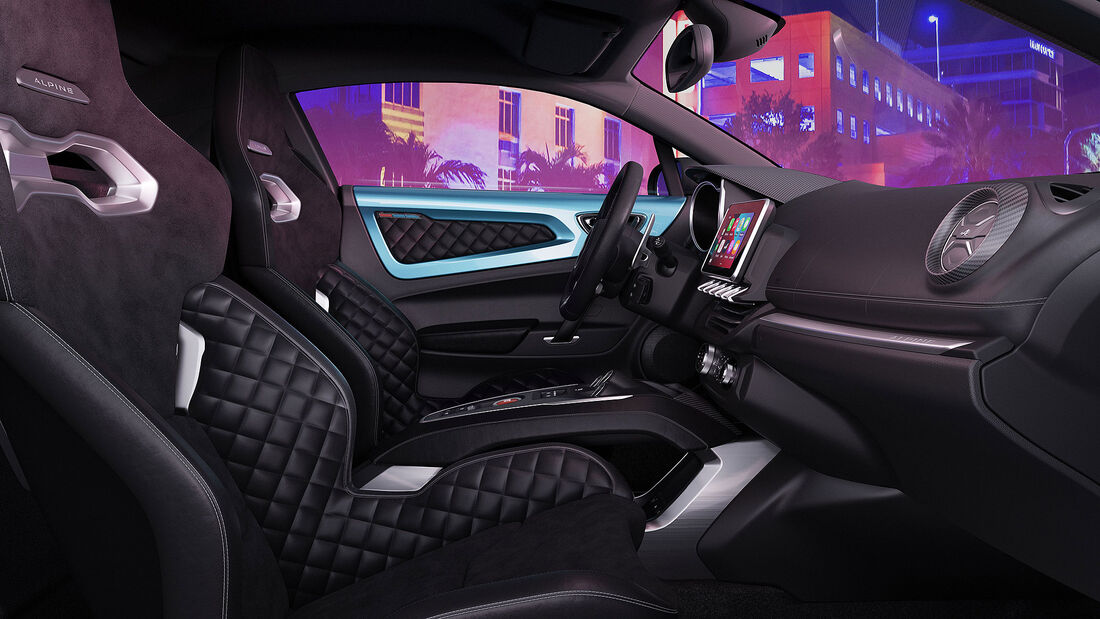 This page contains information on Technomap. Its experts are well familiar with the technology concealed behind the A110’s exterior, having worked on the vehicle’s development stage, particularly with the electrical architecture and its integration with the rest of the mechanical.

The health pandemic issue of 2020 compelled it to consider new verticals for the future of the firm, leading to the concept of building a technical demonstrator: the Alpine A110 Hybrid. The base was already in their workshops, employed as one of the mules during the contemporary model’s fine-tuning.

The Gallic sports vehicle boasts a top speed of 400 horsepower and all-wheel drive. Two reasons that he now lacks and that would have been sufficient to scupper sales in the face of the Audi TT RS and Porsche 718 Cayman, the French’s two adversaries.

To put it mildly, the Alpine A110 Hybrid project’s methodology is peculiar. The fundamental configuration of Renault’s 1.8-litre TCe four-cylinder engine remains the same, but all fuel pipes and lines have been strengthened, since the increase in horsepower from 292 to 400 hp is due to the usage of ethanol rather than gasoline. Also, it includes an electric motor under the front bonnet that powers the wheels on this axle, which is charged by a battery positioned between the front seats.

David Helluin, the project’s leader, agrees that such a change has never been attempted before and that this Alpine A110 is the world’s most powerful vehicle, but it will never see the streets.

The prototype, which cost no less than half a million euros, was exhibited to Alpine executives, who found it intriguing but ultimately rejected it due to its incompatibility with Alpine’s new comprehensive electrification policy.

It will demonstrate its value on the Dreux and Bugatti circuits at Le Mans, but only as a publicity stunt for the company. As a result, hundreds of intriguing advances have been shelved as a result of brand choices.

Alpine’s A110 South Beach colorway commemorates their involvement in the first Formula 1 Miami Grand Prix. As a result, the special edition is inspired by the motifs and colors of the Florida city and boasts several distinctive elements on both the outside and inside. Reservations for the edition are now available via the Alpine app, with orders and sales beginning this summer.

The South Beach Colorway package, which will be offered as an option for additional Alpine models in the future, is highlighted by the colors “Bleu Azur” and “Rose Bruyère.” We are all too familiar with these tones thanks to the neon lights of Ocean Drive, the art deco architecture, the vibrant sunsets, and the city’s vibrant music culture. Apart from the new paint treatments, the A110 is easily identifiable by its 18-inch “Serac Blanc” alloy wheels.

The inside boasts “South Beach” floor mats with synchronized embroidery and moldings that match the body color. Also, there are blue or pink accents (depending on the customer’s color preference), as well as sports seats and a gray-stitched leather center console.

The Alpine A110 was recently facelifted in November 2021 with a new interior and a revised bumper design, although the engine remains the same at 1.8 liters with 252hp and 320Nm (mated to a 7-speed dual-clutch automatic gearbox). The drive is capable of propelling the vehicle from 0 to 100 kilometers per hour in 4.5 seconds.

The new multimedia system has a 7-inch touchscreen and an optional Alpine Telemetrics menu that shows technical data like acceleration, gearbox temperature, and track performance. Additionally, there are three driving modes available (Normal, Sport, and Track), as well as launch control.

Alpine will reveal the pricing of the South Beach Colourway model later this summer. We anticipate a small rise above the €58,850 basic A110 price.

The South Beach Colorway packs have the vintage Bleu Azur or Rose Bruyère body-color paired with white Sérac 18-inch rims. However, in addition to these elements, which are available separately for a classic configuration through the Alpine Workshop, the car’s rear pillar flags are a mix of blue and pink, the door inserts take on the color of the bodywork, the black leather upholstery features gray stitching, and the carpet embroideries feature the exterior livery’s colors.

The pack is compatible with just the regular Alpine A110, which is equipped with a 252hp 1.8L turbo engine. The A110 South Beach Colorway is now available for reservation, only via the Alpine mobile application, with a €1,000 deposit.

However, it will not be available for purchase until the summer of 2022. Alpine now has the opportunity to create the impression of a positive sport on its tour to the United States. The team sits sixth in the constructors’ rankings after the first four races of the 2022 season.

How could it be different, given the French firm’s inspiration from the neon lights of Ocean Drive, the active music culture in the city, and the art deco structures overlooking Miami? As a consequence, an extra package named South Beach Colorway is available specifically for the Alpine A110; the Alpine A110 GT and A110 S, on the other hand, cannot be equipped with this equipment for the time being.

Alpine has selected two tones: Bleu Azur and Rose Bruyère, both of which are part of the Atelier Alpine customizing program’s spectrum of unique tones, both of which are inspired by iconic Alpine decorations used throughout the company’s history. This set of unique paintwork is complemented by 18-inch white Serac wheels and blue and pink flags that cover both the outside and inside, which also have customized mats embroidered with the ornamental colors. and luxurious gray stitching on the vehicle’s upholstery and central console.

Alpine reminds customers that its Atelier Alpine program also provides external customization choices for the A110 in all of its variants, including a variety of possible rim finishes and a broad palette of brake caliper colors, allowing the two-seater sports vehicle to be as distinctive as its owner. Those interested in this extra package should be aware that it will be added to the Alpine product catalog in the summer of 2022, but bookings will begin today, May 3.

Alpine updates A110 sports car ahead of EV transformation

Updated 2022 Alpine A110 gets new infotainment and kit

The next Alpine A110 assembled in the UK?

Alpine A110 of the French Gendarmerie