In September 2021, at the Los Angeles Auto Show, Kia unveiled the 2023 KIA EV9, a totally electric SUV. This will be available as a series version in 2023 – and will be officially available in Europe as well. By that time, the Koreans want to have eleven electric vehicles on the road. Additionally, there is a first price categorization.

The Kia EV9 will be the electric vehicle’s flagship SUV.

It then enters a roof edge spoiler. The rear mirrors the front’s very angular appearance. The body is defined by towering, slender LED lights, which are also dominated in the side view by the sculptural wheel arches housing 22-inch rims.

The driver and front passenger enter the extremely adaptable, light, three-row cabin through doors that open in opposing directions. There is no obstructive B-pillar. The two passengers are separated in the front by a broad yet filigree central console. A big 27-inch widescreen takes over the cockpit and infotainment displays on the tiered dashboard. The driver is seated behind a single-spoke steering wheel that is almost rectangular in shape and folds fully flat to maximize internal space. Recycled materials and vegan leather are used to emphasize the brand’s commitment to sustainability. 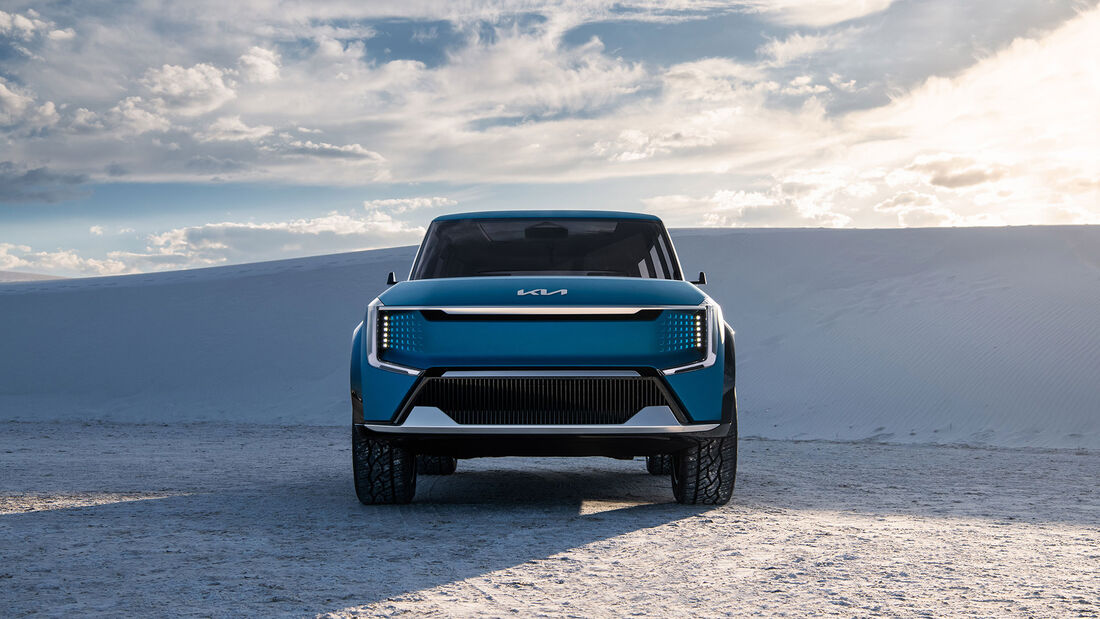 This interior has three distinct settings. The term “Active Mode” refers to conventional driving; the other two notions refer to times during which the automobile remains immobile. In “Pause Mode,” the interior is transformed into a lounge, with passengers arranged in proximity to one another. The second row of chairs has been reconfigured into a table. The tailgate opens and the third row of seats rotates outward in “Enjoy” mode. This enables tourists to spend their break in the car while being shielded by nature.

The Concept EV9 measures 4,930 mm in length, 2,055 mm in width, and 1,790 mm in height, with a 3,100 mm wheelbase. The manufacturing version of the EV9 should therefore have these dimensions as well; the same holds true for the body’s fundamental layout. Despite its diminutive size, the EV9 accelerates to 100 kilometers per hour in five seconds. The SUV has a range of 540 kilometers and a charging time of six minutes for 100 kilometers.

Along with over-the-air upgrades, “features on-demand,” i.e. paid services, are also feasible. Additionally, the vehicle will be the first Kia to have the Auto Mode automated driving feature. Additionally, there is an initial pricing evaluation. According to Steven Center, chief operating officer of Kia America, the EV9’s pricing is determined by the difference between the Niro EV and the Niro Hybrid, or the EV6 and the Sportage. That would mean that the EV9 would cost around $15,000 more than the conventionally fueled Telluride. This is priced from $39,090, whereas the EV9 would cost $54,000.

The Kia EV9 is built on an E-GMP platform.

The production version of the full-size SUV will also be dubbed the Kia EV9. In a strategy presentation, the Koreans had previously unveiled the names EV1 through EV9 for nine new electric vehicles. The concept is built on the Electronic Good Manufacturing Practices (E-GMP) platform (Electric Global Modular Platform).

The SUV is supposed to reach 100 kilometers per hour in five seconds and has a range of approximately 540 kilometers. Kia has not yet released additional technical details, but boasts that “in just six minutes, an extra 100 kilometers of electricity may be recharged.” 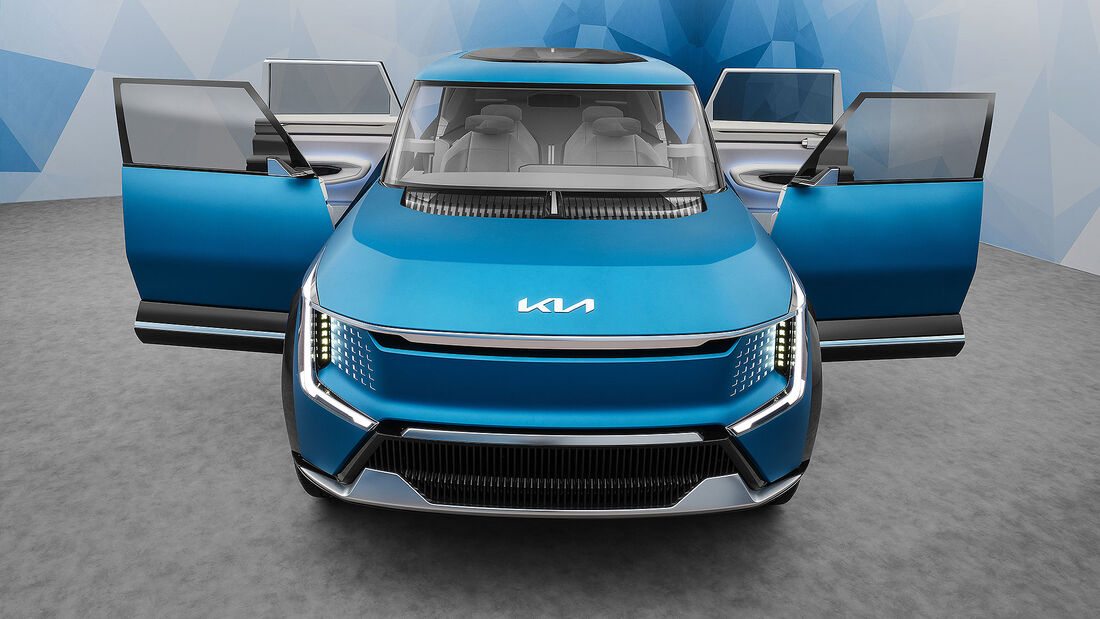 The Koreans refer to their design concept as “Bold for Nature” and attribute it to the “optically low center of gravity of the body and the sharp edges of the high-positioned fenders, which are inspired by crystal formations.” However, something familiar has remained, at least in the nomenclature – the Tiger Nose has been renamed a “digital tiger face,” which refers to a radiator grille with a closed, colored front.

Inside, travelers should feel especially secure in a “variable environment.” Three driving modes are provided to accommodate a variety of driving circumstances. For instance, while the car is in “pause mode,” it transforms into a sort of luxury lounge, allowing the seats to be changed.

The 27-inch widescreen display used to manage the infotainment system, climate control, and other functions is unquestionably eye-catching. The EV9 will be the first Kia model to include “Over the Air” and “Feature on Demand” capabilities. These services enable the vehicle owner to selectively receive software functions. Kia speaks vaguely about “future-oriented autonomous driving technologies” when it comes to autonomous driving. A nice feature is that the steering wheel may be folded in when not in use.

Due to the modern substructure, 800-volt rapid charging technology will be included as a standard. According to Kia, the EV9 will enter production in the second half of 2023.

The EV6’s larger sibling will be a full-size SUV measuring nearly five meters (4.93 meters) in length. The EV9 Concept is characterized by a muscular and angular design. The flared wheel arches contrast with the high front end. The car as a whole makes a hefty impression, and its width of approximately 2.06 meters indicates that it is aimed more at the US market than at the European market.

Unlike the EV6, Kia has incorporated the brand’s signature “Tigernose” grille more subtly into the design, even though the electric car lacks a true cooling air intake in the apron. This part is stylized with decorative strips, beads, and edges on the closed front, which is painted in the vehicle’s color. In the study, the headlights have an interesting design: a vertical light bar and numerous little light pieces mimic the outlines. However, we anticipate a more typical production approach.

The EV9’s major flaw is its corners and edges. The D-pillar is predominantly triangular in shape, which is represented in the 22-inch rims.

On the other hand, the backlights might be mass-produced in a slightly modified form. They extend well above and below the rear window and trunk lid. A large silver-colored underride guard completes the rear.

Almost uncharacteristically for a study, the EV9’s external mirrors are replaced by cameras, which are protected by a square cover. When not in use, the roof rails can be extended to reduce air resistance. 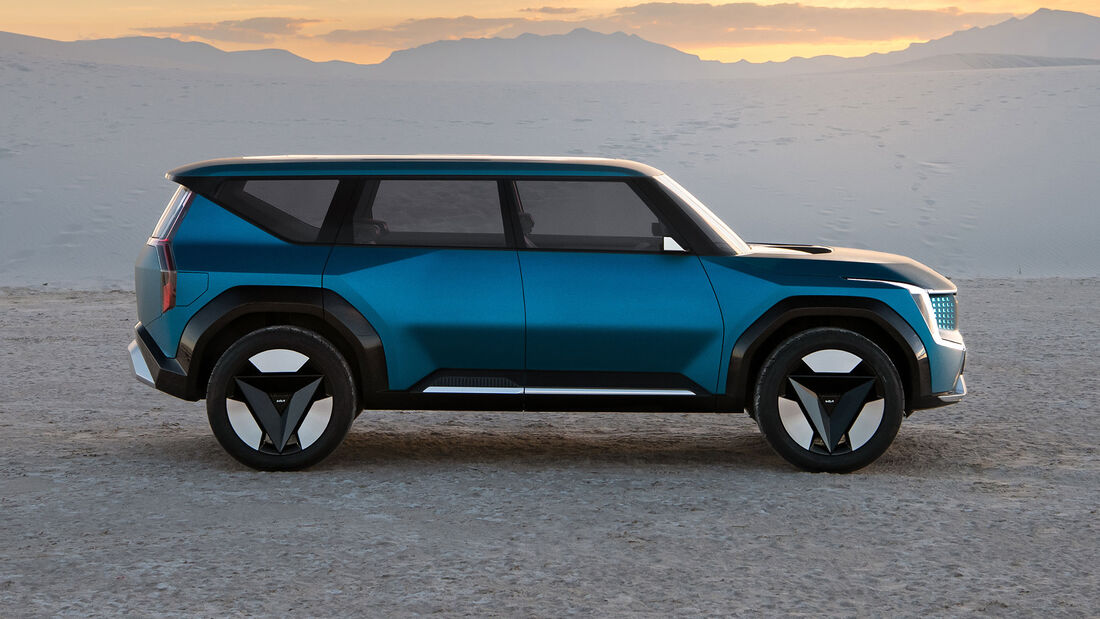 This is the size of the Kia EV9 Concept.

EV9 interior with a 27-inch widescreen and a unique roof

As is frequently the case with contemporary display cars, the interior is intended as a lounge, stripped down to the bare essentials and warmly lit. Even if we are not permitted to enter the study, the benefits of a 3.10-meter wheelbase and a modern e-platform are immediately apparent: an open sensation of space, a flat floor, and six seats.

There will almost certainly be seven chairs in the series, although they will likely be designed less futuristically. And perhaps the final EV9 will include the 27-inch display. Or the lovely features, such as the retractable glass canopy that acts like self-tinting sunglasses.

The Kia EV9 is expected to have a range of approximately 500 kilometers.

The EV9 will be built on the E-GMP platform, which also underpins the EV6 and Ioniq 5. A solar panel mounted behind the windshield is said to add a few watt-hours. There are no concrete performance specifications at this time, but the platform should support up to 600 horsepower. That is the intended performance: Kia specifies a sprint time of approximately five seconds.

Apart from pure driving performance, the Koreans have already revealed that the EV9 will be the first Kia vehicle capable of autonomous driving beyond Level 3 and allowing for update purchases via the infotainment system.

If you like a distinctive SUV, the Kia EV9 is for you. With strong hips and a blunt front end, the boxy SUV appears to have regained its shape.

Concerning the front end, Kia avoided the trap of installing enormous grilles solely for the purpose of having a grille. Because the EV9 is an electric vehicle, it requires much fewer cooling air vents than a gasoline or diesel vehicle, which contributes to its sleek appearance.

Instead of vents, the EV9 features stylish moldings and contemporary light signatures. Additionally, it incorporates retractable roof rails that vanish when not in use, enhancing aerodynamics.

A solar panel integrated into the hood can generate electricity when you’re not near a charger. The EV9 boasts a clean, modern design from the side. It features noticeable creases and flared arches, as well as the traditional pair of big alloy wheels, which will almost certainly be toned down for production.

The rear gullwing doors of this concept automobile open to expose a pillarless design that provides for simple access to the roomy inside. The rear area features a similarly basic style. The taillights are elegant, and the tailgate features distinctive shapes. 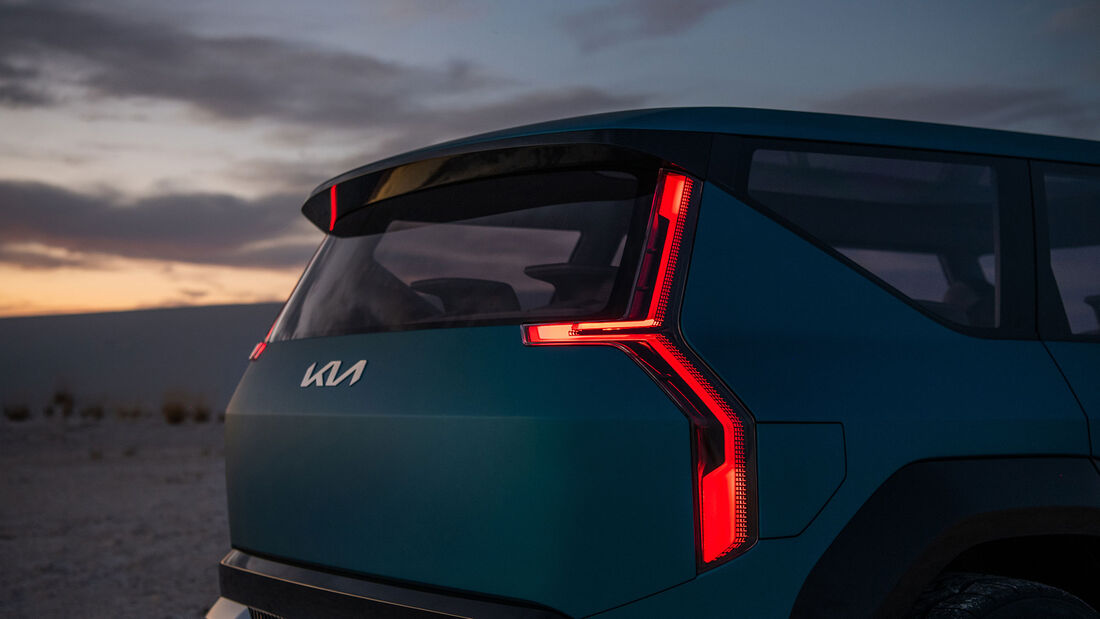 Interior and infotainment of the Kia EV9

When you get inside the Kia EV9, you’ll notice that the interior is equally as luxurious as the outside, though it’s unclear how much of it will make it to production.

The dashboard appears to float and is constructed from an array of intriguing materials, most of which are sustainable. The flooring is constructed of recycled fishing nets, while the seats are built of recycled water bottles, significantly reducing pollution during the vehicle’s manufacture.

A 27-inch ultra-wide screen serves as the highlight of this interior, housing both the infotainment system and the digital driver display. Although this location houses all of the vehicle’s functions, including climate control, its location may vary in the production vehicle.

The Kia EV9 Concept’s interior is divided into three modes: Active, Pause and Enjoy. While Active mode is ideal for the on-the-go, Pause mode spins the seats to face each other when parked, creating a lounge-like environment. When parked in “Enjoy” mode, the third-row seats swing outward toward the tailgate, providing a leisurely view of your surroundings. As nice as that sounds, it is highly improbable that this will be produced.

The battery and motors of the Kia EV9

Although the Kia EV9’s powertrain is unknown at the moment, it has been established that it is based on the same basics as the EV6 – and hence potentially shares many of its electrical components.

A 77.4 kWh battery might be used in this situation, providing a range of over 480 kilometers.

The Kia EV9 is expected to feature an all-wheel-drive with dual motors. Expect less than the Kia EV6 GT’s crazy 585 horsepower. However, 325 horsepower (as found in mid-range EV6 vehicles) should be enough. 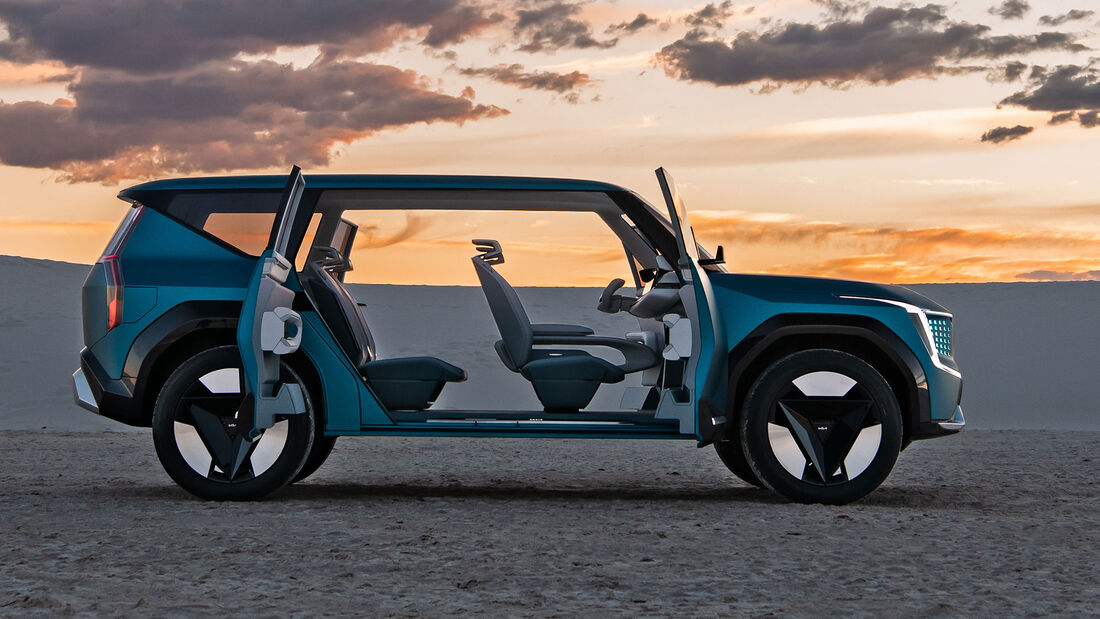 Prices and availability of the Kia EV9

While the new Kia EV9 is still a concept, a production model has been announced for Europe in 2023.

However, it will be substantially more expensive than a Kia Sorento equipped with a plug-in hybrid powertrain or an EV6.